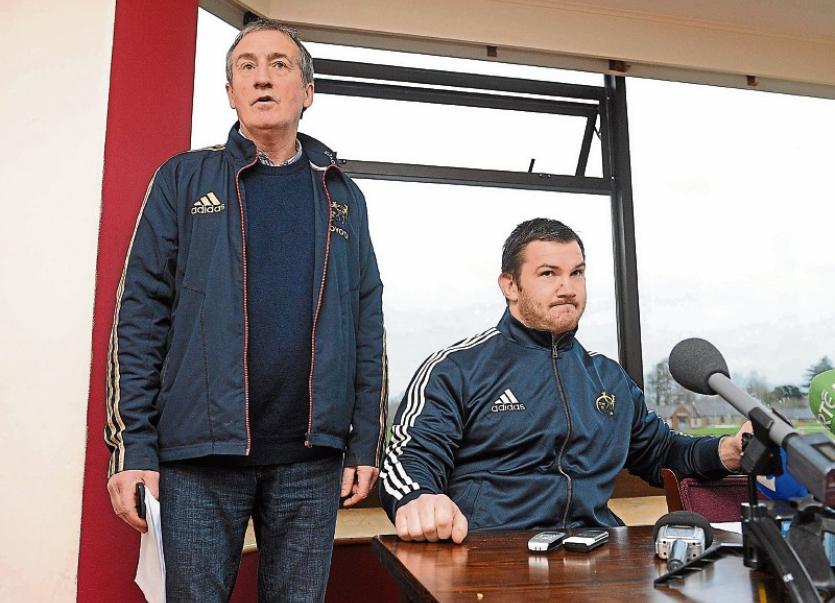 Former Munster media manager, Pat Geraghty, left, who will be laid to rest this Thursday, pictured with former Munster hooker Damien Varley in 2012

FORMER Munster media manager Pat Geraghty, who passed away following an illness earlier this week, will be laid to rest in his Co Kildare on Thursday.

Aged in his early 60s, Pat Geraghty served the role as Munster’s media manager between 2000 and 2013.

His time with Munster was highlighted by the province’s only two Heineken Cup successes in 2006 and 2008.

Paying tribute, former Munster hooker Damien Varley, who worked with Pat Geraghty at Munster between 2008 and 2013, said: “We have lost another great man, another great contributor to Munster Rugby.

"He was someone who was extremely close to all the players.

"He always had the backs of all the players, I'm sure to the disappointment of some journalists who were renowned for fighting and arguing with him, but that was simply because he looked after us so well and protected us.

"Some players don't mind doing the media days and we chat away to the journalists. There were times going into them and you would say, 'Pat, what am I supposed to say here?' and he would reply, 'just tell them nothing!'

"We'd laugh and joke about it because inevitably we would all give the same lines and tow the party line. Pat was very good at steering us in what to say, he was almost the PJ Mara that we were exposed to at Munster.”

Educated at Clongowes Wood College, in his early days Pat Geraghty played club rugby with North Kildare Rugby Club and continued his long-standing association with the club by joining them as Director of Rugby after his time with Munster.

He also worked as the media officer with Leinster Rugby.

Funeral Mass on this Thursday, in St Patrick's Church, Celbridge, at 11am, burial will take place in Donacomper Cemetery.