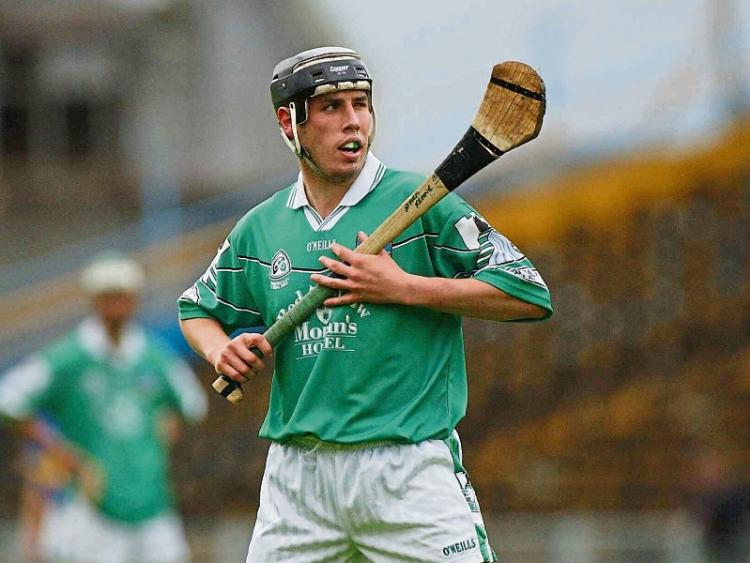 TWO minutes into injury time Mark Keane stood over a 35-metre free to win the 2001 Munster U-21 hurling title for Limerick.

The Gaelic Grounds was heaving - just over 18,000 spectators were treated to an epic as Dave Keane’s men defended their title.

Lar Corbett had just equalised as Tipperary battled back from 10-points down. Then referee Ger Harrington awarded a Limerick free. Tipperary disputed and even tried to disrupt the South Liberties man as he stood over the free.

“I was on such a high that I could have taken that free with the top of the hurley and scored it,” recalled Keane, who finished with 2-7.

His first goal came after 90-seconds, injuring his hand in the process.

“I didn’t realise I had a problem with my ankle until I took off the boot. I went into the Regional to get the finger sorted and asked them to check the ankle and it was broken. Three weeks later I took off the cast to play the semi final against Galway but I shouldn’t have because I was poor.”

“They were good times - we were so lucky that such an exceptional group came along at the same time. We just went into every game expecting to win. Look at the belief that Kilkenny teams have, that was the same with us,” said Keane.

Along with Timmy Houlihan, Damien Reale, Eugene Mulcahy, Conor Fitzgerald and Kevin Tobin, Keane won the hat-trick of Munster and All Ireland U-21 titles.

Prior to that Keane played three years of inter-county minor hurling.

But his path could have gone another way.

“Hurling would have been my first love but we played everything - once I was playing sport I was happy. I guess it was drilled into us to be doing something. If I had to pick a 1-2-3 well then hurling would be no1 but I could just as easily be playing something else and be just as happy,” he explained.

“I idolised Tony Keady and Martin Naughton - Tony Keady with his white helmet. I was six in ‘87 and I can remember the Galway and Tipperary game - that’s my first real recollection of hurling. And, then I can remember Limerick’s ‘92 league and the Ray Sampson point.”

As a schoolboy, Bord na nOg GAA action was mixed with Schoolboy soccer.

“I played with Pike Rovers and it was them by pure accident. It’s just over 30 years since Pike Rovers crashed into our home place on their way back from an FAI Cup game in Cork. My grandmother was a nurse and they say that she was responsible for saving lot of lives that night. Three died but I remember the club came back out some time later to present a memento to her to say thanks for what she did. That set up a link between us and club and a few years later when myself and the brothers wanted to play soccer my father brought us into Pike, although geographically Pike is actually in the parish of Donaghmore-Knockea,” he outlines.

Before he played minor hurling for Limerick, he could very well have ended up ‘cross channel’ with offers from West Ham and Stoke.

“I was playing up in Dublin in an FAI match against St Josephs Boys and there was some underage international that scouts were over the watch. I did it the GAA way and kicked him off the field and they thought I was great. I would have been an old style centre back - I won the ball and then gave it to someone that could play football, ” he laughed.

“Not for one second.”

So he progressed to the Limerick minor hurling set-up and blazed a trail as a star forward, but that happened as a “pure freak”.

“The only reason I ended up in the forwards was because I got injured playing minor with Liberties. I was centre back and got injured and they put me up full forward and I think I scored 3-2 or something,” said ace-free-taker Keane.

It all started in Ennis with a 2000 Munster semi final win over a Clare side that were the All Ireland MHC winners of three years previous.

“They were ear-marked for great things going into that game - the weight of expectation probably got to them. We were fierce lucky I think. It was really low scoring (1-9 to 0-9) but we got there - if we didn’t there would be no three-in-a-row.”

“Even that Munster final, we were lucky. I was taken off in that game and John Meskell stepped up to score a free to level it.”

That was against Cork. The replay attracted 11,500 to the Gaelic Ground and a 4-18 to 1-6 win signaled the first of six trophies for Keane and the Limerick U-21s.

“There was a resilience in the teams. It wasn’t something that was driven into us it just seemed to come natural. Something that was there from years of playing together from Tony Forristal upwards.”

Thirty nine different players saw action in that 15 game unbeaten run over three years. That 39 and many more panelists were guided by a management of Dave Keane, John Meskell, Dave Punch and Pat O’Callaghan.

“They were brilliant man-managers - there was nothing dogmatic. The boys were like friends rather than managers. I could never under estimate what they did,” said Keane.

“There was a huge buzz around - Limerick hurling was buzzing. I thrived in it - everywhere we went we were heroes. I remember going into my old National School in Knockea and Barry Nash was looking up at me, just like I had looked up at Mike and Declan Nash when I was young. That’s what makes the GAA so special because its parochial.”

He added: “I definitely took it for granted”.

“It’s only in the last six months when I realised that I wasn’t going to hurl again that I am coming to realise how special it was. There is always a tinge of regret but when you look at what we did win, it’s still amazing.”

Keane was to start just six senior championship games for Limerick! He made another four appearances as a substitute – scoring in total 0-25.

He explained: “Back in those early 2000s there was the economic boom and I was an apprentice electrician and there was no shortage of jobs around building sites and no shortage of money. I didn’t want to stay in nights when I should have”.

“If only I could put my 36 year old head on my 19 year old body. There is massive regret but I was always very proud to wear the Limerick jersey.”

Keane pin-points the 2001 Munster U-21 final as his finest day in the green and white but reserves special mention for his club.

“I probably hurled my best when Liberties won the intermediate (2009). I think I was better then than any previous year. My most treasured was definitely 2009 with Liberties - playing with family and close friends. I can thank Noel Hartigan for all the work with me all the way up from underage to even intermediate,” he outlined.

By then his days with Limerick were well finished - his last outing in 2006 after a four year championship absence.

In between he even played senior football with Liam Kearns’ Limerick - winning a McGrath Cup medal.

That was 2004, a year when Keane, Brian Begley, Stephen Lucey, Mike O'Brien, Conor Fitzgerald and Mark O'Riordan all opted to commit their services to football alone when presented with an ultimatum by new hurling manager Pad Joe Whelahan.

The others returned to play key roles with the Limerick hurlers but Keane’s only Munster SHC appearance after 2002 was in 2006.

All the time he continued to be one of the mainstays of the South Liberties effort to climb back into the senior ranks after they suffered final heartbreak after final heartbreak. A 2009 IHC final win over Ballybrown saw Liberties back in the top flight and they continued to add a Munster IHC to that season.

Since his inter-county senior days came to an end, Keane has combined his Liberties’ GAA duties with starring roles in the Premier Division of the Limerick District League.

Soccer titles followed with Carew Park. He was winning captain with Carew and in August of 2004 they just fell short of an Aviva Stadium FAI Junior Cup final appearance when losing to Sheriff YC in the semi-final of the prestigious competition.

”I gave up the liquor in 2011 and I can honestly say that I never enjoyed sport as much as I did for the next three years,” he revealed.

But injuries caught up with him.

This Monday Keane went under the knife for an operation on his hip.

”I won’t play again but hopefully this operation will mean I won’t need a full hip operation for a few years yet.”