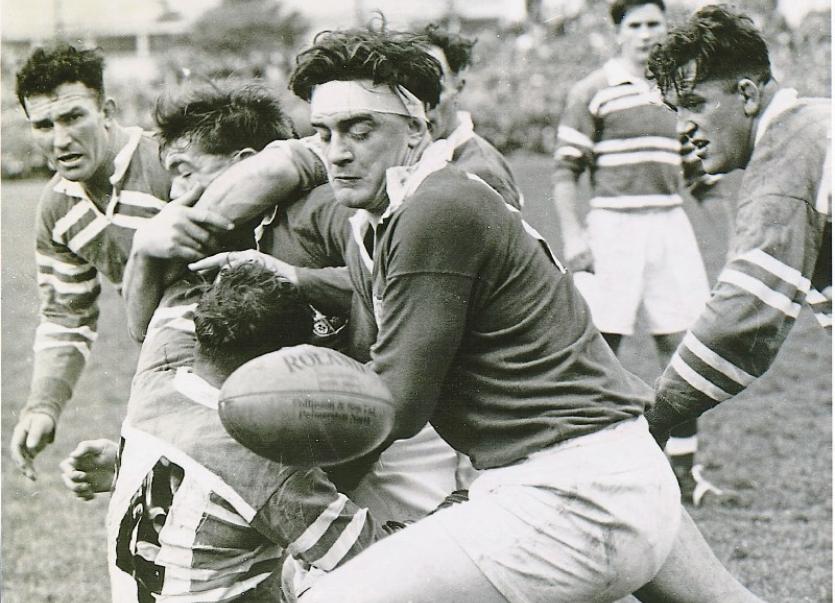 AHEAD of Saturday's eagerly-awaited first test, the British and Irish Lions have won just one of nine test matches at Auckland's Eden Park against the All-Blacks.

However, 12 years earlier, in September 1959, Rathkeale man Bill Mulcahy was a key member of a Lions Test side which stunned New Zealand 9-6 before 60,000 spectators.

It was the first of two Lions tours for talented second-row Mulcahy, a retired doctor, who also travelled to South Africa in 1962, when he brought his tally of Lions Test caps to six in all.

Former Ireland and Lions rugby legend, businessman Tony O'Reilly, said of his team mate Mulcahy, who won 35 Irish caps; 'He was never less than good and sometimes was superb. He was one of the most courageous footballers I have ever played with.”

How did your interest in rugby develop?

Bill Mulcahy: "My father William J who was a doctor in Rathkeale played rugby with the Old St Mary's RFC in Dublin while he was studying medicine.

"My own first real taste of rugby came at St Munchin's College. I got a taste for it there and enjoyed it. Guys from the local clubs would come and do training sessions with us, fellas from Shannon, Garryowen, Young Munster and so on.

After St Munchin's how did your rugby career develop?

BM: "I wasn't sure what I was going to do initially after school. I fell into medicine, really. Med school didn't start until mid October. I would have played several league matches with Bohemians before going up to college.

“I won a Munster Senior Cup in 1962, I was down home for a while, in between jobs, starting off playing with them. You had Mick English and Sean McHale, who was propping for Ireland at that stage, Benny O'Dowd who played with Munster was second row with me. Christy English, Mick's brother, was a fine player. He was skipper that year, Kevin Prendergast, and so on. I moved back to Dublin to work in the Children's Hospital. I came down every second weekend to finish out the season with Bohs.”

When did you make your Ireland debut?

BM: “My first Irish cap was in January 1958 against Australia in Dublin. We were the first Irish team to beat a touring side, 9-6.

"Winning your first cap is a great thing, there is always the worry that it could be your only one. It is more rare now. I played in the 5 Nations in 1958 and again in 1959.

“We beat France in our last match (9-5) in Lansdowne Road in April 1959. They were already 5 Nations champions. It was a big scalp to take.”

What are your own first Lions memories?

BM: "The 1955 Lions I can remember listening over a crackly radio from South Africa. That got me interested.

"I think I probably heard it first off the radio in 1959 that I had been included in the squad for the tour to Australia, New Zealand and Canada, or maybe it was through the newspaper. It was a 33-match tour, probably took four and a half months to play in all.”

There was a chance you wouldn't travel on the 1959 tour although selected?

BM: "It was a bit difficult in that my late mother was a widow at that stage. Her attitude was 'get your exams, get out of college'.

"A local priest in Rathkeale, Fr Carroll, went up to talk to an uncle of mine who was Dean of the Limerick Diocese at that stage up in Kilmallock. My uncle was 89 and he wouldn't have been reading the sports pages.

"The objections to me going were pulled back on, so off we went. The college exams had to wait a wee while.”

BM: "There were 9 Irish players out of 30 selected to travel initially. We ended up with 10 because Andy Mulligan came out to join us through injury. There were a few of us Limerick lads involved, with Mick English and Gordon Wood.

“We had a week in Eastbourne in England training to get fit. You had two or three members of the team who were PE teachers in their day jobs, the like of Jeff Butterfield.

“There was no coach, of course, it was more or less left to the captain and guys between themselves. There were six matches in Australia of which two were Tests. Then we crossed over to New Zealand. the first port of call was Napier, Hawke's Bay.”

You picked up an unfortunate injury early on?

BM: "I played the first Test against Australia which we won and then in the second mid-week match against New South Wales Country team in Tamworth I ripped my shoulder rather badly.

"I think the pitch was a cricket wicket, it was very hard, like concrete. I was out of action for six or seven weeks and then I had to get fit again.

“I subsequently had that shoulder replaced in 1997. I suppose the tour was so long there was a chance that I would be fit again so I didn't go home.”

The All-Blacks won the first three tests in 1959. What's your memory of that fourth test win at Eden Park?

BM: “I remember after the final whistle sounded - it was our last game in New Zealand - they started to sing in Maori, 'Now is the Hour when we must say Goodbye'. We were still on the pitch shaking hands with one another.

“It was very touching. I think a lot of the New Zealand supporters were glad we had won the last test because we felt we had been hard done by in the first Test where we lost 18-17. We scored four tries and they kicked six penalties through Don Clarke.

“You had local referees in those days. Even after we fell 18-17 behind, we scored another try by Roddy Evans, of Wales, and the ref found reason to disallow it. Evans threw the ball at him and said, 'you just won't let us win.' Fair-minded New Zealanders were glad we won the last one. We lost the Test series 3-1.

“I toured with the Lions again in 1962 to South Africa. There were some brutal matches on that tour.”