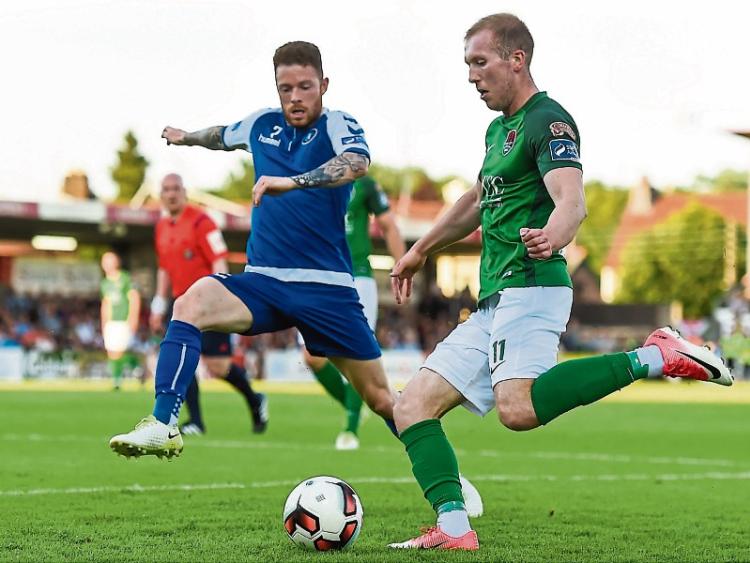 The Blues have now suffered three goal defeats to the Leesiders in each of their three meetings this season in the league, twice, and league cup.

Losing to a rampant Cork side which has taken 52 points from a possible 54 from their opening 18 games is no shame, but the soft nature of the goals the Blues conceded will be a cause for frustration.

The defeat leaves Limerick FC sixth in the Premier Division table and seven points clear of the drop zone.

Limerick FC manager Neil McDonald made three changes to the side that defeated Bray 5-3 two weeks ago for the trip to Leeside.

Brendan Clarke replaced Frederick Hall in goal, while team captain Shane Duggan and Dean Clarke came into the starting line-up for the injured Shaun Kelly and Thomas Robson, who has returned to Sunderland

The in-form Sean Maguire fired Cork into the lead after 24 minutes when he headed Karl Sheppard’s cross into the net from close range.

Limerick levelled within moments as City keeper Mark McNulty fouled Blues winger Chiedozie Ogbene in the box and Brazilian Roderigo Tosi blasted the resultant penalty into the top right corner of the net.

Leaders Cork retook the lead shortly before the half time break when Stephen Dooley rifled an unstoppable effort into the net via the far post.

Preston-bound Maguire bagged his 18th league goal of the season within 16 seconds of the restart when he rounded Blues ‘keeper Brendan Clarke and rolled home following an underhit back pass from Robbie Williams.

John Caulfield’s Cork side wrapped up the victory late on when Jimmy Keohane drilled a stunning effort into the net again off the post.

Next up for Limerick is a crucial clash with second-from-bottom St Patrick’s Athletic at the Markets Field on Saturday, June 24 at 6.30pm.