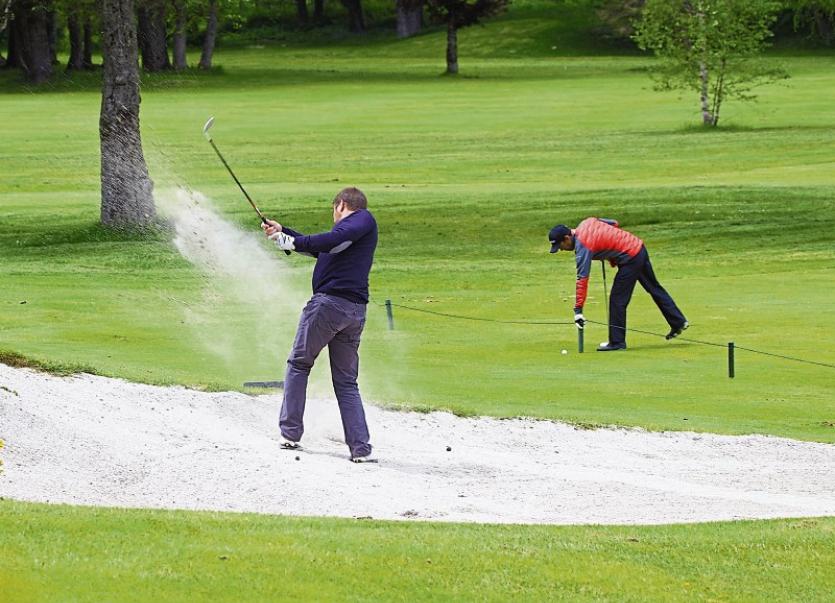 Mutt: Did you notice 59s are becoming a regular occurrence? Jeff: The pros are hitting the ball so far we shouldn't be that surprised. Justin Thomas, one of the most recent 59-shooters was able to reach the 663-yards long, 18th hole at Kapalua with a drive and 7-iron in his landmark round.

Mutt: I know it is severely downhill but it's still phenomenal hitting. Thomas is average in size - 5'10" and 145-lbs - but one of the game's longest hitters. He must be made of elastic to generate such a high swing speed.

Jeff: Professional golfers play a different game to the rest of us. You won't agree but I wouldn't like to see a tournament ball introduced. Pros are a small percentage of golfers. Let them bomb away!

You and I need equipment to help us as much as possible and I love watching pro's doing things that I can only dream about.

Mutt: My problem is how one-dimensional the pro game has become. I'm rapidly losing interest in it. There was a time when everyone used all 14-clubs allowed in a round.

These days, touring pros could easily survive with 10-clubs and four of them might be wedges! The ball flies so straight that all of the fear has gone out of the game for good players - it's just a matter of winding your body into a corkscrew and swinging as hard as possible.

You could not do that 20-years ago because the balls and clubs were unstable. A tournament ball is the only way forward but the club golfer should be allowed to play whatever ball he likes.

Jeff: I like seeing things I can't do myself and miss seeing the likes of a Nick Faldo or Greg Norman chicken-winging 2-irons from hanging lies onto a green from 200-yards range; these days that would be a gouged 7 or 8-iron.

Mutt: Too bad professional golf has lost that special skill and artistry due to the optimization of science. It's no longer a skill game - it's an exercise in science, physics and chemistry as they apply to athleticism.

Jeff: The cost of golf and the length of time it takes to play 18-holes are bigger problems than the distance ball goes. I was thinking of buying a new wedge but shopping around I was horrified to find that a very average run-of-the-mill Cleveland model is now €150.

The components would hardly come to €20. Where does the rest of the money go? It isn't the margin the retailers earn. It's a scam that we now have to buy our wedges separately. A set of irons is now seven clubs instead of nine.

Mutt: It's killing the goose that laid the golden egg! Golf has to decide whether it's a game of skill or power. When good players say their most reliable club is their driver, I wonder if skill is being overlooked?

Power off the tee and skill on the putting green alone does not a complete golfer make. There should be a lot more to it than that.

Jeff: Better players, better equipment, better knowledge and better-conditioned courses are all contributing to the spate of 59s.

Only three players broke 60 on the PGA Tour in the 20th century, but five have done so in this decade. When Larry Nelson won the 1993 US Open at Oakmont he used a four-iron for his second shot into the first green each day.

In 2016 on the same hole, Dustin Johnson used a pitching wedge on three days and a sand wedge on the other. In 1998, John Daly led the tour by averaging 298-yards off the tee.

In 2016, 27-pros topped a 300-yards average. Any course with mundane par-5s is defenseless. Luke List (who?) is already 50-under-par on par-5s this season. A golf course's only defense, these days, is weather.

Bring those bombers to Lahinch or Ballybunion on a rough day and let's see them shooting 59s - no chance!

Mutt: I really do worry about the inactivity of the game's authorities. Their continual refusal to accept how far the ball flies is a barrier to solving so many of golf's biggest problems.

Jeff: I wonder whatever happened to the Cayman Ball developed by Jack Nicklaus in the 1980s? It was the same size ball but the dimples were brambled (i.e. projecting outwards instead of inwards).

It was a much lighter ball and it flew only slightly more than half the distance of a conventional golf ball. Its lightness helped novices to get the ball airborne and it sat up on top of the grass more easily making it easier to hit, especially with fairway metals, but the concept never took off.

The biggest advantage was the length of the holes could be shortened considerably. It costs less to maintain shorter courses and 18-holes would take an hour (minimum) less to complete.

The Cayman ball is still made today by Caeser Golf, proud manufacturers of non-conforming balls. If you are inclined you can buy them on the Internet and use them outside of competition.

I'd be curious to try both the Cayman as well as its Caeser's 'Dimpleness' ball which is reputed to fly 30-yards further than the hottest, conforming brand with the same swing speed and effort.

Don't ever say I never told you anything out of the ordinary and gave you a guaranteed few extra yards!