Tommy O'Donnell back for crucial Munster clash with Racing 92

Keith Earls misses out due to injury, with Ronan O'Mahony taking his place 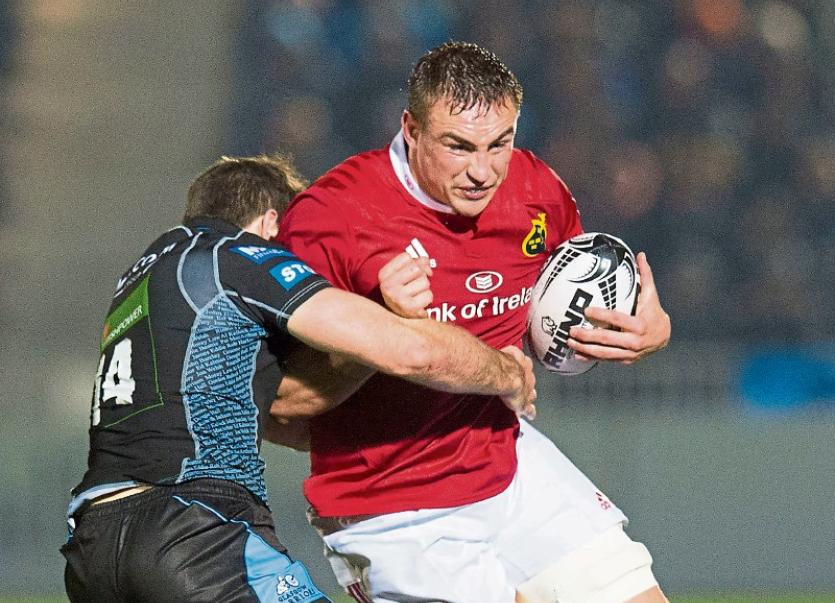 TOMMY O’Donnell has been passed fit for Munster’s crucial clash with Racing 92 at Thomond Park this Saturday, but Keith Earls misses out.

The back row returns to the team for the European Champions Cup game at 5.30pm, but Earls is not in the squad with the Moyross man not included after taking a knock to his ribs in training earlier this week.

A win will see the province secure a home quarter final in the competition.

O'Donnell, James Cronin and Ronan O'Mahony come into the starting team, with Jack O'Donoghue and Dave Kilcoyne moving to the replacements after last week’s narrow win over Glasgow.

Those three changes aside, the team is the same as the one that beat the Scottish team last weekend, with Niall Scannell and John Ryan continuing at hooker and tight-head prop respectively, Donnacha Ryan partnering Jean Kleyn in the second row and captain Peter O'Mahony, O'Donnell and CJ Stander completing the pack.

Conor Murray and Tyler Bleyendaal are the half-back pairing, with no change to the midfield partnership of Rory Scannell and Jaco Taute.

O'Mahony – Munster’s top try scorer this season – takes the place of Earls in the back three with Simon Zebo and Andrew Conway maintaining their places.

Zebo will be hoping to continue his outstanding try-scoring record against Racing that has seen Munster's record try-scorer touch down five times in three games against the French team.

The game will mark Munster's 60th top-flight European Cup game at Thomond Park, the first of which took place against Swansea in 1995, with Munster losing just four of those 60 encounters at the Limerick venue.

As was the case with the St Stephen’s Day clash against Leinster in the Guinness Pro 12, an additional 200 temporary seats have been installed for Saturday evening’s match, which kicks off at 5.30pm.

Munster Rugby has confirmed the fixture, which will see Ronan O’Gara return to Thomond Park for the first time as a coach, is a complete 26,200 sell-out – making it the fifth full house of the season.