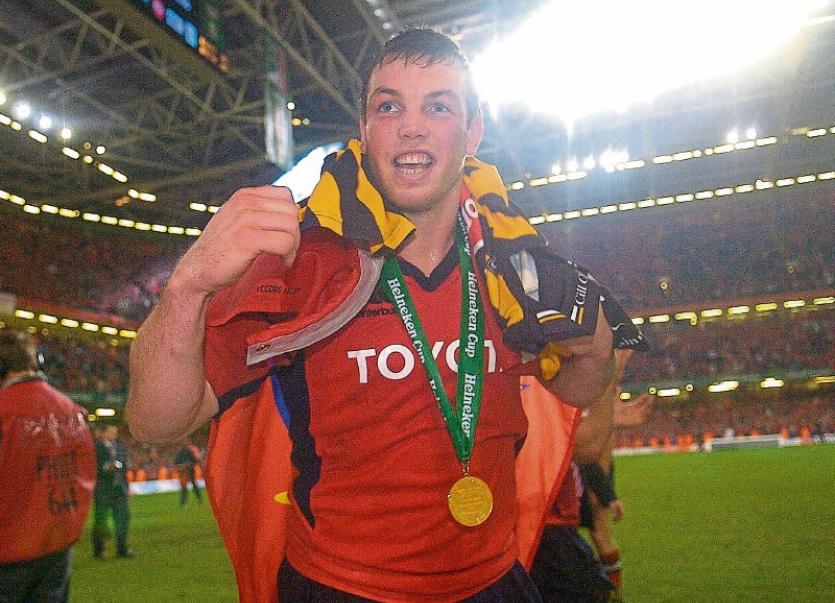 TWO-TIME Heineken Cup medal winner Ian Dowling was coming off the golf course at lunchtime on Sunday  last when his mobile phone rang.

It was Munster scrum coach Jerry Flannery on the other end of the line from Paris. Hooker Flannery and winger Dowling were starting members of Munster’s epic first Heineken Cup final a decade ago, a side captained by the province’s head coach Anthony Foley.

Dowling recalled this week: “I got a call off Jerry Flannery. I was coming in off the golf course. It was a few hours before Munster’s match with Racing had been due to kick off in Paris.

“It kinda rocked me now. I wasn’t sure why he was ringing me at that time, so close to the match which he was involved in as a coach.

“He told me the news. Then you just go numb. You wonder what to do next.

“When I came in I met Gerry O’Mahony who had just heard from his son Ronan (Munster player). Myself and Barry O’Mahony called over to Paulie’s (O’Connell’s) house.

“Anyone who was around was just kinda keen to meet up together.”

Thirty four-year-old Ian Dowling arrived in Limerick just over a decade ago having played his rugby at Kilkenny RFC. Dowling, who won two Ireland caps, said Shannon’s reputation as a club which ‘looked after their own’ was the reason he chose to join.

Dowling said: ”One of the things that was said most to me and resonated most with me when I was considering which club I was going to join in Limerick was that Shannon players look after their own.

“Coming from Kilkenny and hearing that when I came to Limerick made a big impression on me. I suppose if ever there was a man who was the epitome of that it was Anthony Foley.

“With myself and Barry Murphy coming into that Munster squad and team in 2005-06, we were chasing or looking to have the respect of our peers.

“We both looked up to and admired all these guys. The season before I was playing AIL and you see the wall in Shannon with all those past internationals and you see Anthony being up there and then being able to step into the team and play alongside him was something special.

“When you got Anthony Foley’s respect it was something to be treasured. It wasn’t something that was earned easy.

“His team talks – I will never forgot those before a match in the Clarion or whatever hotel we were in beforehand.

“Senior players would talk, but he would sum it up in terms of what needed to be done when we took to the pitch.

“Sometimes it was under the posts, at half-time or after the game. His rugby IQ was immense.

“Off the pitch, he was great company to be around. On social occasions and social nights out you would find him at the end of the bar, back against the wall.

“Any time you would see him he just looked content in his own company. But then he just loved the craic with his friends. His friends were the guys he took to the pitch with and it strengthened the relationships.

“I gained a lot of confidence and fierce determination from him.

“It couldn't have been more right or fitting that Axel would be that guy to captain Munster to win the Heineken Cup in 2006 and then obviously when you have done it once everyone else could see it was a ceiling or barrier that has been broken through.

“You need a man, a character there who is strong in self-belief and has enough courage in his convictions to lead those around him to get that result. When you lose a couple of finals it can be even more difficulty mentally to break that barrier.

“All he cared about was how he was going to make Munster better. He lived and fought for that.”

Ian Dowling was forced to retire from professional rugby in April 2011 aged 28 due to a hip injury.

The physiotherapist is part of the Tipperary senior football backroom team.