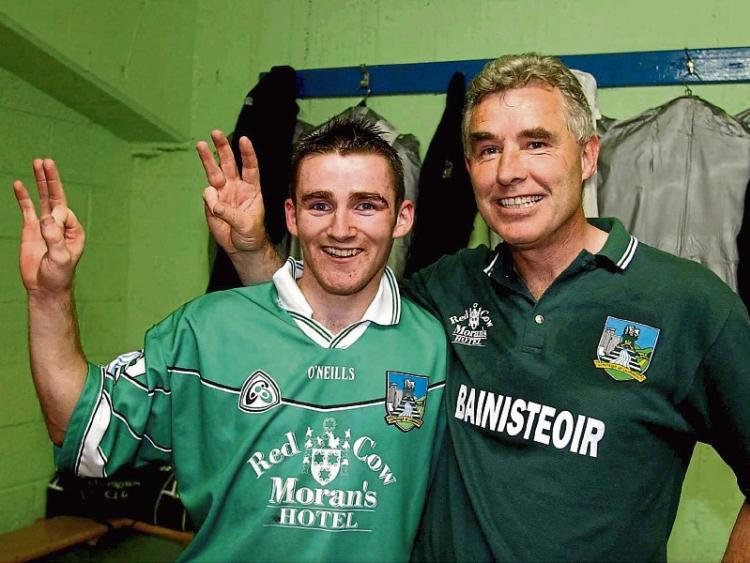 NEXT Sunday will be the first time that Limerick enters into a Munster SHC without representation from the three-in-a-row winning U-21 teams of 2000-02. Jerome O'Connell looks at how their careers played out after those glory  days

In total 39 players were used by Dave Keane, John Meskell and Dave Punch as Limerick dominated the U-21 scene for the early years of the new millennium. All but 10 of this group played senior championship hurling with Limerick.

Sixteen years later all have passed through the inter-county scene since the off-season retirement of Donal O’Grady. Indeed less than 50% are still playing at the top level with their clubs and some have moved into club management.

Nine different Limerick senior hurling managers have dipped into the reserve of this U-21 talent with some of those rising stars blossoming into household names nationally and Limerick stalwarts.

The coveted Liam McCarthy Cup was never annexed but this group of players did add to their respective inter-county roll of honours with Munster and Leinster SHC titles, a National League title, a Division 1B league, two Waterford Crystal Cups and indeed some football silverware.

The Adare man played every minute of all three U-21 campaigns - in 2000 while he was still minor. He 2001 was the U-21 winning captain. He played 15 times for Limerick in the senior championship, debuting in 2001 against Cork. Last played in 2006.

Another who won the three U-21 medals and always at Number 2. Led out Richie Bennis’ Limerick onto Croke Park in the 2007 All Ireland SHC final as vice-captain. That was one of the Hospital-Herbertstown man’s 36 championship appearances for Limerick between 2001 and 2011.

Three-time All Ireland U-21 winner in the full back line. The Knockainey man played three times for Limerick in the championship - all in 2003 when Dave Keane moved up from U-21 manager to senior manager.

The South Liberties man was the scoring star for all three U-21 teams. Played in 10 championship games between 2000 and 2006. In 2004 he won a McGrath Cup with the Limerick footballers. In 2013 he captained Carew Park to the FAI Junior Cup final in the Aviva Stadium.

Another three time U-21 winner. In 2000 also won a Munster U-21 football title. The Adare man played 15 times in the hurling championship between 2003 and 2008 but also graced the football field and played in Munster finals.

Played in all three winning years at U-21 level. The Murroe-Boher man had to wait until 2005 for his senior championship debut and made 11 appearances until 2008. Will always be remembered for starring in the 2007 Munster SHC trilogy with Tipperary.

The last of the three-time U-21 All Ireland winners, joining his brother Kevin. The Murroe-Boher man progressed to play 19 times in the championship, making his debut in 2004 against Cork and ending with Offaly in 2008.

Joined his cousin Damien in the full back line in 2000. Injury curtailed his years after the U-21 win and the Hospital-Herbertstown man didn’t play senior championship with Limerick.

The Patrickswell man was wing back in the maiden U-21 win. Was involved in a number of Limerick panels up to 2004 without making a championship appearance.

On the winning Limerick U-21 hurling and football teams in 2000. The Monaleen man made his championship debut in 1999 against Waterford and continued in the green and white until 2012 with 45 appearances, mostly at Number 6.

Wing-back in 2000, the Murroe-Boher man made his senior championship debut in the same season. Didn’t nail down a senior starting role and departed with four championship appearances, his last in 2006 when he was recalled by Richie Bennis.

The Ahane man was midfield in 2000. Was involved in a number of senior panels but had to wait until 2003 to make his two championship appearances.

The Patrickswell man was another involved in just 2000. Went straight into the senior set-up and in his debut year was free-taker as Limerick reached the 2001 Munster final and All Ireland Quarter final. Played 15 times in the championship until 2006.

The Doon man made his senior championship debut in 2000 against Cork before the U-21 All Ireland campaign. That was to be his only championship appearance.

The winning captain in 2000. The Adare corner forward would later captain his club to Limerick SHC honours. Played 15 times in the championship with Limerick, from 2003 to 2009.

Started corner forward in Ennis in the win over Clare that set the three-in-a-row in motion. Didn’t progress to play championship hurling with Limerick but this season marks his 20th championship seasons with his club Monaleen.

The Croom defender had to wait until 2006 for his hurling championship debut and progressed to play 15 times in total. Throughout the last decade was a key part of the Limerick football team at corner-back.

The Kilmallock man played in 2001 and 2002 in the full back line. Played National League with Limerick in 2004 but never championship. Played in the 2005 Limerick SHC final but moved to Galway, where he lined out with Kinvara, who reached last year’s county IHC semi final.

An U-21 winner in 2001. A Limerick senior chance never came his way but he is in the history books as Na Piarsaigh’s first ever Limerick SHC winning captain. A selector with his club side that won the historic All Ireland club SHC title this March.

On both the 2001 and 2002 teams and produced some moments of magic in both campaigns with some telling scores from frees and penalties. The Patrickswell man was only to play eight times in the championship between 2001 and 2009.

A two time U-21 winner who progressed to play 46 times for Limerick - just two off Mark Foley’s appearance record. Along the way the Ahane man scored 7-97 in championship action.

The Garryspillane man won in 2001 and 2002. Was only to play for Limerick four times up to 2007 before work took him to Dublin. With the Dubs he won a Leinster SHC and a National League crown. Back in Limerick now and managing Ahane this season.

An U-21 winner in 2001 and by his own admission not a key player that season. But progressed to write himself into the history books as Limerick’s 2013 Munster SHC winning captain. The Granagh-Ballingarry man was the last of this U-21 group to leave the inter-county scene with 46 championship appearances.

The Mungret man was part of the 2001 success. In that year’s Munster semi final he was used as a substitute in the 0-18 to 2-11 win over Cork. Didn’t progress to make in-roads with the county senior team. Did play in the Munster IHC with Limerick.

The Granagh-Ballingarry man was also introduced in that 2001 win over Cork. Didn’t see action with the county senior side but did line out on a number of occasions with Limerick intermediate teams.

Centre back in the 2002 winning side. The Kilmallock man made his Limerick championship debut in 2003 and played 12 times up to 2008. Now resides in Brisbane in Australia, where he still hurls.

A 2002 U-21 winner with Limerick and three years later a Limerick SHC winner with his club Garryspillane. Continues to line-out with The Bouncers in the Premier IHC but a Limerick inter-county championship chance didn’t come his way.

Centre forward in the 2002 team, the Bruree man was to captain Limerick to the 2007 All Ireland SHC final. In total he played 16 times in the championship for Limerick between 2003 and 2009.

The Murroe-Boher man was used a number of times as a substitute in the 2002 campaign. Didn’t move on to senior level with Limerick but still lines out with his club in the Limerick SHC.

The Croom man was introduced in a number of games in the run to the 2002 Munster and All Ireland titles. No Limerick senior follow-on but still playing club hurling in the Premier IHC.

A teenager when he played in 2002 at corner forward. The Knockainey man advanced to play six times for Limerick in championship hurling between 2003 and 2005. Like O’Shaughnessy his debut came while he was still in St Colmans College in Fermoy.

The Askeaton-Ballysteen clubman saw action during the 2002 campaign. He was part of Dave Keane’s Limerick senior panel in 2003 but didn’t get a championship debut. He captained the Limerick junior footballers in 2009 and played National Football League in 2010.

The Croom defender forced his way into the 2002 U-21 starting team. Made four championship appearances for the Limerick seniors.

The Adare man was introduced as a sub in the 2002 All Ireland semi final win over Antrim. In 2004 he made his only championship appearance for Limerick against Galway.