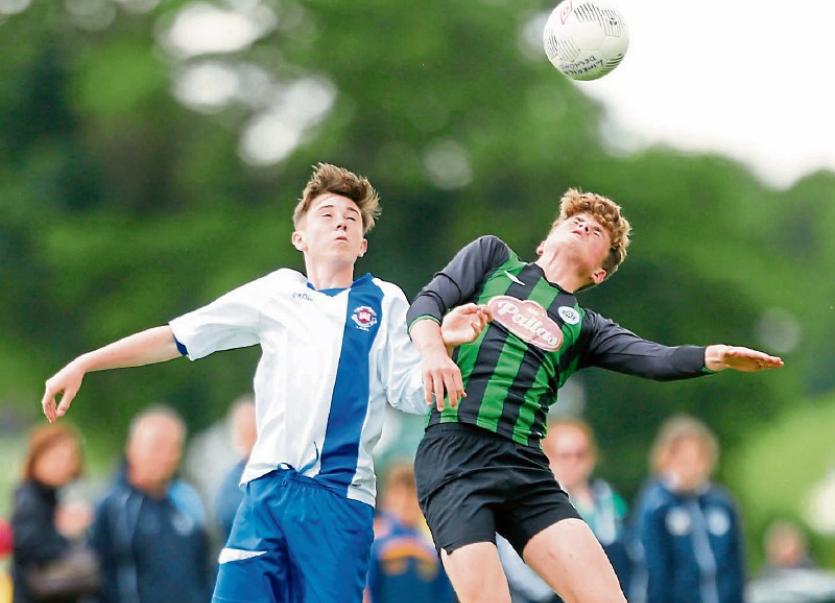 LIMERICK Desmond Schoolboy League booked their place in Wednesday’s quarter-finals of the SFAI Kennedy Cup after securing a hard-earned 1-1 draw with local rivals, the Limerick District Schoolboy League at UL on Tuesday.

The precious point to go with their two earlier wins against the Midland and Clare Leagues helped Limerick Desmond finish top of Group 2 on seven points.

Although Limerick District produced their best display of the group stages, fighting back in the second half to secure a draw, overall it has been a disappointing campaign to date for the side.

The District’s hopes of advancing to the business end of the Kennedy Cup disappeared with their earlier defeats to both the Clare and Midlands League.

The District will now play-off for the lower finishing positions in the 32-team competition as they take on Carlow at 3pm on Wednesday.

Limerick Desmond made the perfect start when awarded a penalty goal in the third minute after Granagh Utd’s Ronan Geary was felled inside the penalty area.

An ice cool Joey Rushe calmly netted the resultant penalty, his second goals in as many Kennedy Cup games.

Desmond retained their 1-0 lead until half-time, but the District drew level 12 minutes into the second half when Pike’s Ethan O’Sullivan scored from the penalty spot, his side’s first goal in the competition.

Desmond League’s quarter-final will take place at 5pm on Wednesday with their final opponents to be confirmed after the final series of group games this Tuesday evening. The DDSL, currently top of Group 7, are the Desmond side’s most likely opponents.