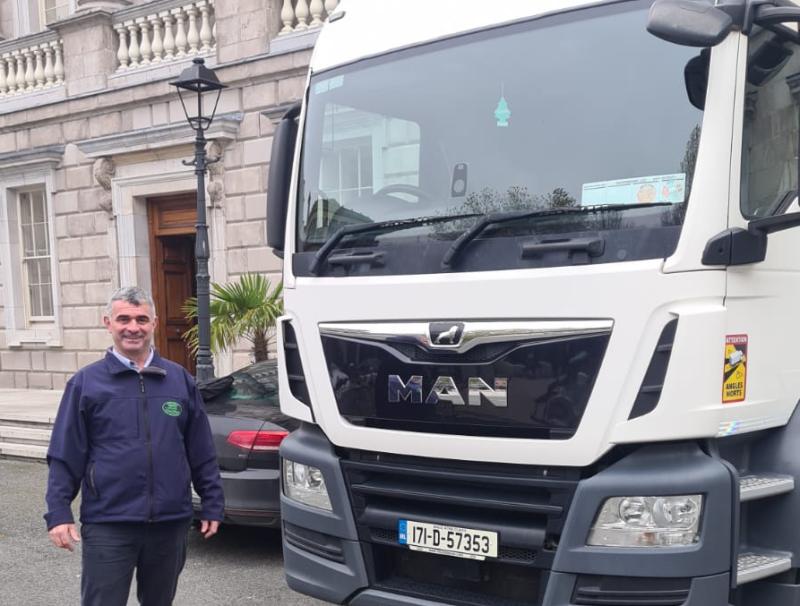 Richard O' Donoghue TD is urging the public to protest over the rise in fuel prices voted in by Government.

A LIMERICK TD has driven a lorry to the doors of Dáil Éireann in protest of rising fuel prices.

One senior political RTÉ reporter said that seeing the Limerick politician exit the cab was “a new one” for him.

A new one on me - Independent TD @RichardODonoghu drives a cab into Leinster House @rtenews pic.twitter.com/g8bXMPotkR

Independent Deputy Richard O’ Donoghue says he is sending a clear message to the Government, that every TD in Ireland voted for a 2% increase in fuel prices, except the Independents.

“I have driven my truck to Dublin and into Leinster House today in protest over the Government's failure to act on the fuel prices,” he said in a TikTok video.

He went on to explain that for every €100 of petrol purchased by an individual, the Government pockets €57.

Deputy O'Donoghue previously raised eyebrows at the first meeting of the 33rd Dáil, arriving in a vintage 1959 Plymouth, exclaiming that he was a member of the vintage car clubs in Clare and Limerick.

“Tomorrow (Wednesday) is a truck protest. I am asking everyone in a truck, bus, car, bicycle, everything, to come out and protest tomorrow about the fuel prices. The Government are taking everything, and all we want is to have something back,” the Deputy declared on TikTok.

The aim of the protest, he added, is to rally Leinster House to reduce the VAT on fuel, reduce the customs excise, so that “everyone can pay a little.”

“Our children need to get to school on private buses. Our food needs to get to our table from the trucks around this country. Please come out and protest tomorrow with us,” he finished.