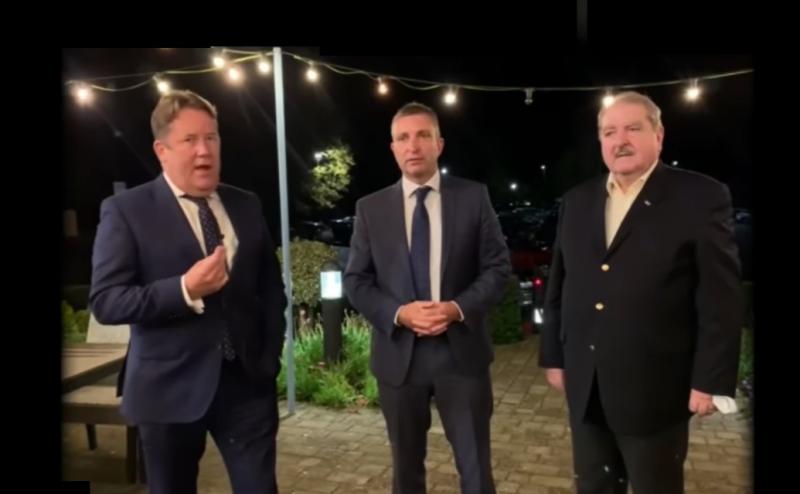 THERE is now “light on the horizon”, Askeaton-based councillor Kevin Sheahan has declared, and he is confident that a new sewerage system for the town is on its way.

This follows a meeting over the weekend with  Minister for Housing, Local Government and Heritage, Darragh O’Brien who was accompanied by Minister of State, Niall Collins.

Speaking following the discussion, Minister O’Brien said he had discussed with Cllr Sheahan and Minister Collins the “need to progress the upgrade and expansion” of the town’s waste water treatment plant.

The meeting comes after months of agitation by local politicians over the continued spillage of raw sewerage into the River Deel.

Minister O'Brien's comments were made in a video which was posted on Deputy Collins' social media accounts (see below) over the weekend.

“I have committed to continuing to work with Kevin and Niall,” Minister  O'Brien said. “I will be raising it with Irish Water. I know it is longstanding. We want to get it done.”

"I would be hopeful the matter will be progressed," Minister Collins said following the meeting.

“Minister O’Brien  told me ‘I have the funding’. He said  get in there as early as possible and I will fund it,” Cllr Sheahan said afterwards.

But what was urgently needed now, he added, was action from Limerick City and County Council as the new sewerage scheme would be routed through them and not Irish Water.

“I am now applying all the pressure I can on the council to accept this as an opportunity and to prepare the paperwork,” the Fianna Fail councillor continued.

The site is there for a new plant, he said, land that was bought years ago by the council.

There are also plans available, drawn up years ago but which would, he said, need to be upgraded. And now, Cllr Sheahan pointed out,, funding had been identified.

“We have to do a Part 8 and get the plan through,” he said. “It can be done rapidly. I am confident I am dealing with a chief executive who will be committed to this.”

“I can’t see any reason we can’t have it in two years,” he declared. “I am overjoyed that at long last, there is light on the horizon.”

The issue of an inadequate sewerage system Askeaton  goes back several decades, Cllr Sheahan pointed out.

But a new system he said would open up big, new opportunities for Askeaton from the point of view of housing and industrial development. He believed the absence of a proper system was a factor holding back the promotion and development of the 230-acre industrial site on the outskirts of the town.

“I am now reactivating my efforts to get that site or part of that site promoted and utilised,” he concluded.