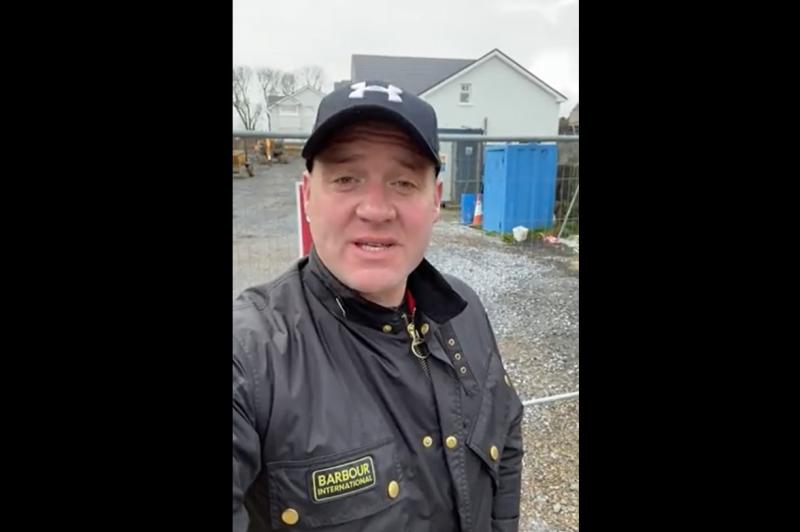 Cllr Emmett O'Brien pictured outside the housing development in Pallaskenry

NEGOTIATIONS are still continuing between Focus Ireland and Limerick City and County Council about the future of 16 houses being built in The Orchard Estate, Pallaskenry.

But local councillors meeting this week said there was a lot of concern locally about the project.

The original plan from the developer was that it would be a private housing estate, Cllr Emmett O’Brien pointed out. But then the council proposed to buy 16 houses, eight for rent and eight for affordable purchase.

However, with Focus Ireland now coming in, all houses would be for rental and his concern was that councillors would have no control over who got the houses. “We want local people to get those houses,” he said.

“Why aren’t some still affordable houses?” Cllr Stephen Keary demanded. “Are ye going to do a U-turn on this?” How could councillors, have any faith in  agreements made if they were changed the following day, he argued. And he  questioned how planning permission for private houses could “all of a sudden” be for social housing.

Cllrs John O’Donoghue and Bridie Collins were also concerned that the eight houses designated for affordable purchase would no longer be available, but were told that Approved Housing Bodies (AHBs) cannot sell to tenants.

“The way we are going, AHBs are going to own all the houses,” Cllr O’Donoghue said.

Last month,  Limerick City and County Council said in a statement that  it had signed a fixed-price contract with Top Drawer Development for 16 houses but the developer got into difficulties due in part to COVID-19 pandemic, which had led to a delay in the project.” “As well as the pandemic, the impact of Brexit and other supply chain issues have seen an additional increase in the cost of building materials,”  a  spokesman said.

Because it was a fixed price contract, he explained, the council could not pay any top-up and had approached Focus Ireland with a view to taking over the contract in order to ensure the houses could be secured for people on the housing waiting list.

“We are prohibited from increasing the money,” director of services for housing, Caroline Curley told the councillors this week. “We knew they (Focus Ireland) had greater flexibility on the price.”

“Are we setting a very dangerous precedent here?” Cllr Adam Teskey asked. He argued that the best policy might be to stand back and try to deal with the issue, in time,  through the Derelicts Sites legislation.

But, councillors were warned, it was still not a done deal with Focus Ireland and that a contract has not yet been signed. The houses, they were told, would be delivered in turn-key condition with a finish date of March 1 and the houses would be allocated to people from the area on the housing waiting list.