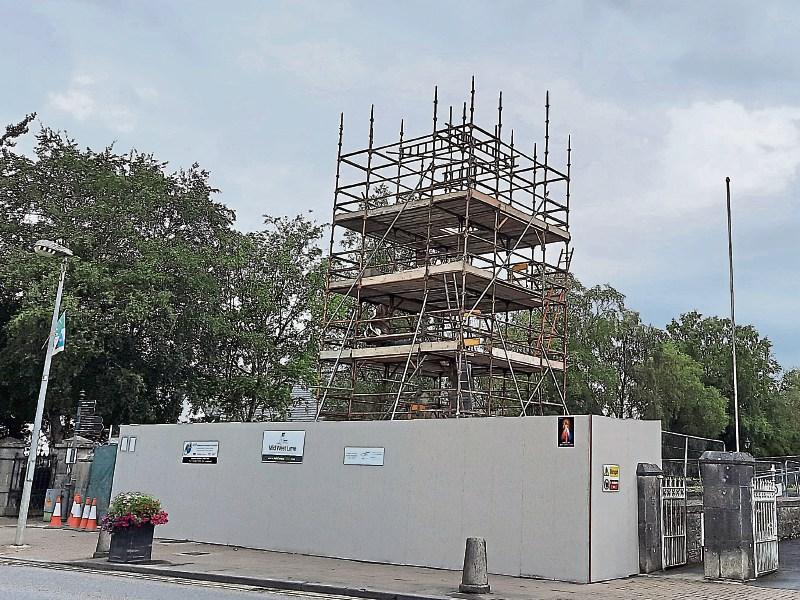 Works to restore the historic fountain took place over the summer

FINE Gael councillor Adam Teskey has slammed the €220,000 cost of restoring the Countess Dunraven fountain on Adare’s Main St and has described it as “squandering public money”.

“€220,000 is a mortgage for most people who spend a lifetime of work to accumulate that sort of money and we have spent it on a fountain,” he declared at a meeting of Adare Rathkeale councillors where the full costs of the project were revealed.. “I don’t know how anyone could stand over it.”

“I am not against the project,” he continued. “There has been a fantastic job done.” But, he said, councillors had a role to ensure that  monies are not wasted and  people would be “shocked, alarmed and disappointed” at this “waste of taxpayers’ money.”

“Common sense is very, very scarce in this authority,” his party colleague, Cllr Stephen Keary said. criticising the costing process which had seen the cost escalate by 150% from the initial estimate. He was also critical of the fact that €160,000 had come from council funds at a time when they were being told there was a €1m gap in the finances.

Executive architect Tom Joyce told councillors that the primary focus at the beginning was the restoration of the fountain. But  it then became clear that a more comprehensive project was involved. This included stabilisation of the fountain, removing the railings and greenery and developing a new seating area around the fountain.

Restoration projects are difficult to cost, he reminded councillors and there had been an increase in costs as a result of Covid and Brexit and the evolution of the design. “I do feel the project represents value for money,” he said.

“This is the first time I have seen what this project costs,” Cllr John O’Donoghue said. It was costing a quarter of a million euro at a time when “there is a hole in our finances”.

“It would want to blow me away, unless Padraig Harrington or Rory McIlroy is going to tee off from it at the Ryder Cup,” he said.

Cllr Kevin Sheahan said councillors’ main objection was “the lack of information and accountability on expenditure”.

But Cllr Bridie Collins was full square behind the project, the idea for which had originally come from Adare Tidy Towns. “This project is absolutely stunning,” she declared, praising the beautiful work done.

Everybody in Adare was very very pleased, she said. The village  now had an area on the Main St where people could relax and meet, she continued, and already there was demand from bridal parties who wanted to take photographs there.

“This is the poster-boy for what could be done all over West Limerick,” Cllr Collins said and she urged all the councillors to attend the official unveiling of the fountain at 4pm this Friday.