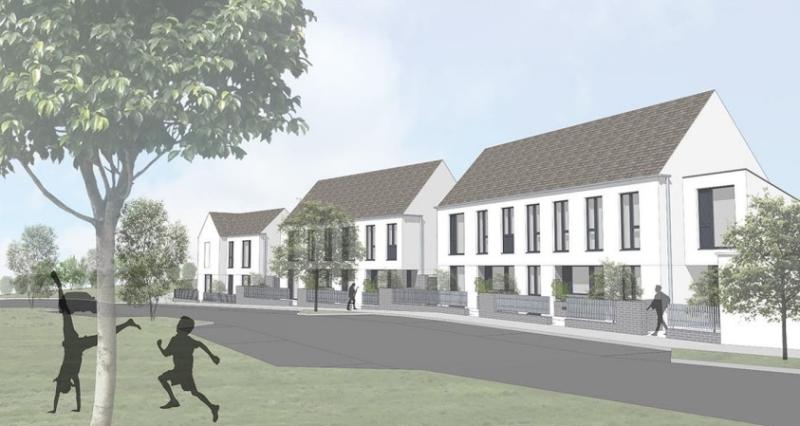 An architect’s impression of the houses planned for Ballylanders

A greenfield site in Ballylanders has been selected for the proposed development, with the nine new residential units to join the existing Church Glen residential development.

The nine units will comprise of five houses and four duplex apartment units, on a naturally sloping site, to the south and east of the existing development.

Members of the Cappamore-Kilmallock Municipal District heard the Chief Executive’s report, outlining the details of the newly proposed Part 8 development, which received no submissions.

Cllr Gerald Mitchell welcomed the development and questioned whether any of the nine new units would have chimneys installed.

“We have completely taken fossil fuels out of all of the buildings,” Cathal O’Boyle, Senior Executive Architect with Limerick City and County Council stated in response.

Mr O’Boyle outlined that new houses are no longer “obliged” to have a chimney and as time moves forward, he believes there will be fewer of them popping up on future builds in the county.

The issue, he added, is that chimneys function by taking heated air out of the buildings. The nine units in Ballylanders will be heated from “very efficient” air to water heat pumps.

Limerick home fit for a princess sells for €1.4m

Conor Culloo, Senior Engineer with the Council, furthered the point, explaining that traditional storage heaters have a 1:1 energy input to output, while air to water systems register energy to heat at 1:4.

How someone would heat their house in a storm, with a system running solely off electricity, was queried by Cllr John Egan.

“What happens in the event of a breakdown or emergency. Ballylanders is a very cold place” he added, stressing that there should be chimneys as a safeguard to such an event.

Mr O’Boyle stated that there would be difficulty in heating the house in the event of a power cut, but that it would only be a big issue if it were to last for several days as opposed to hours.

Construction of the development, which was approved by councillors, is due to commence in February, 2023.