Opposition grows over preferred route for bypass of Limerick town 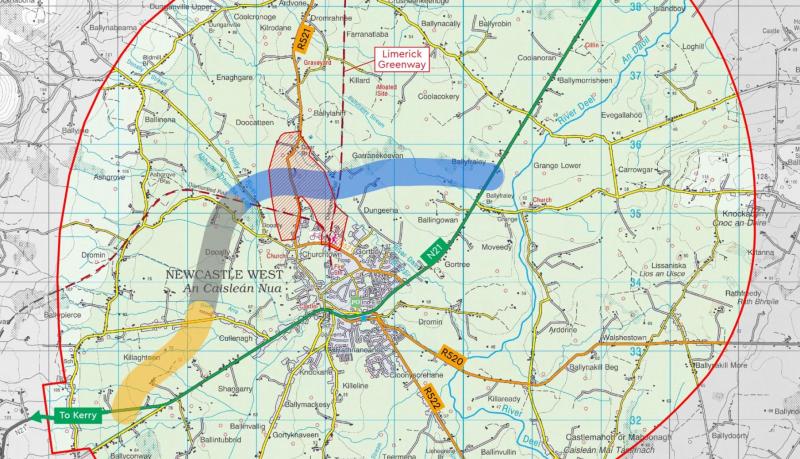 The preferred route for the Newcastle West bypass has been released

OVER 70 people attended a public meeting held in Newcastle West this week to voice their concerns about the preferred route for a bypass of the town.

Now, a petition, Protect-the-Limerick-Greenway, has been put up online and those attending the meeting made it clear they want the December 7 deadline for submissions extended.

The bypass route was announced last week showing the preferred route beginning at Ballyfrawley bridge on the Limerick side of town and swinging north of the town for seven kilometres before exiting near Garryduff  Cross to the west of the town. It crosses the newly reopened greenway at two points.

But, Willie Keane explained, addressing the meeting on Tuesday night, the greenway could be crossed at a third point  if a link road to the bypass was routed to Churchtown.  “We don’t know what is happening with the greenway at Churchtown,” he said.

They needed to get answers for the overall plan, he argued.

“The greenway is there. Why would you destroy it and build a road over it?” declared  Stephen McGuinness, who had made a 15-page submission when the four possible routes were first announced last February. But he argued,  “none of it seemed to make any difference” and he agreed that they were being “railroaded through this process”. “It is going to badly affect the greenway. I don’t believe the process is democratic or fair.”

Diane Nolan was also concerned about the effect on the town’s green spaces,  pointing out  that the route would encroach on the greenway and the Demesne. “What they are telling us as residents is that your enjoyment of the green spaces is not monetised and it doesn’t matter,” she said.

“We have got to look at . a wider audience,” argued another man who called for a social media campaign to get support from people around the country “We have got put pressure on those who were hired by Limerick City and County Council to take the heat away from them”

Other speakers raised questions as to why the report on the route selection would not be available until February, well after the deadline for submissions.

“I understand how this is going to affect people.” Cllr Liam Galvin said, explaining that the by-pass for Abbeyfeale could come within 50 yards of his home. But he said: “The vast majority of people want a bypass of Newcastle West. They want a bypass of Abbeyfeale and of Adare” . But, he agreed, the bypass, would not relieve congestion on the south side of the town.

The Design Team would be talking to all affected in the coming months he said before a design of the road was finalised. The 400-metre corridor would end up as a 75-100 metre road, he explained. But he stressed  that once the plans were submitted to An Bord Pleanála it was crucial that people make known their objections.

“We live in hope,” Cllr Jerome Scanlan said. “Nothing will change unless change is attempted.”  The Environmental Impact Assessment, which will be undertaken next year,  could have a bearing, he said, and  also argued that the route selection report due in February should be closely studied. “Everybody needs to refer to the Distributor Road,” he said. “To me the greenway was sacrosanct,” he continued. “You just have to question the sensibility of crossing it twice or three times.”

The meeting’s organisers have asked people to contact them on protectlimerickgreenway@gmail.com