Don't Mind Me: Ghosts of the Civil War still haunt us 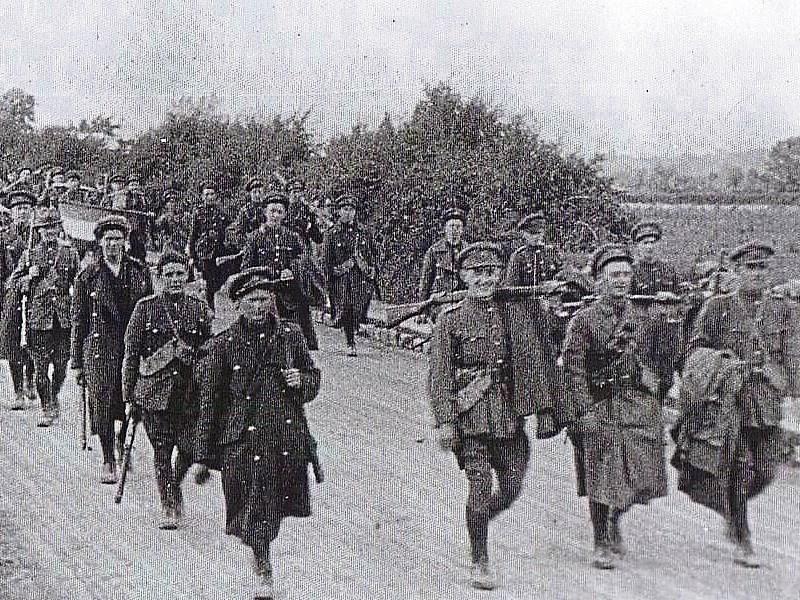 A Free State Army column on the move during the Battle of Kilmallock, the largest single engagement of the Irish Civil War

WE’RE on the last lap now of this ‘decade of centenaries’ and some of us are showing signs of commemoration fatigue. That isn’t to say that we’re in any way less patriotic than those who have managed to stay the pace. We’re simply out of breath. However, the most testing time lies ahead for all of us, with the centenary of the Civil War looming. How we’re going to handle that particular memory will be a true test of our mettle.

Without meaning to sound facetious, I have to say that I was of the opinion that it was a bit premature to be commemorating the Civil War - yet. I’m really not sure if it’s over at all and I felt that we might need at least another century to make sure that it was finally done and dusted. I’m still fighting it myself in the middle of election campaigns.

I grew up among veterans of the Civil War half a century ago. None of them – apart from a couple of die-hards – ever wanted to talk about it. To all intents and purposes, they had wiped it from their memories. Maybe the best way to honour them now is for us to do likewise. But we can’t leave it out either. Once we started on this ten-year commemoration spree, there was no way we could ignore that particularly tragic chapter on the road to freedom.

But I have to say that I was a bit gobsmacked when I heard that the State had, more or less, abdicated its responsibility for commemorating the more challenging and arguably less glorious last quarter of the decade of centenaries. They’ve passed the buck to local authorities and local communities to continue the commemorations which began in 2012 and climaxed in 2016. Maybe the Government just couldn’t handle such bloody memories at national level without posing a threat to the fragile confidence and supply agreement between the descendants of the two main protagonists in the Civil War.

Instead, they’ve handed the princely sum of €10,000 to each local authority to commemorate the vicious period in whatever way they think fit. I’d say that was tempting fate, if it weren’t for the fact that you could hardly organise a decent bun fight on your average village green for such a paltry sum nowadays.

But I do think that the €10,000 grant could have been better spent on fixing pot-holes and helping to solve the housing crisis. Our own property tax has just shot up by ten per cent here in Tipperary and I’d hate to think of any of it going to commemorate the Civil War.

The Department of Arts, Culture and the Gaeltacht, however, has advocated sensitivity and non-partisanship in whatever memorials are being held. Where’s the fun in that, you may ask. Anyhow, how do you define sensitivity in an atmosphere of charged emotions? As I said at the beginning, we all need more time to get over the trauma. Even a bi-centenary celebration might be premature.

Nevertheless, something took place a couple of weeks ago in my own neck of the woods that gives great hope for our ability to look back without anger. A headstone was unveiled on an early September evening over a previously unmarked grave in Ardcroney cemetery, outside Nenagh.

The moving ceremony was held nearly 100 years after the shooting dead by Republican volunteers of the young man of 20, who lay buried there for decades.

I wasn’t at the ceremony, but I wish I had been, because I think this has been one of the most significant events so far in this ‘decade of centenaries’. I wish I had been there too because the sad story of what happened to Constable Thomas Gallivan and his colleague, also aged 20, Constable Joseph Daly, on May 14, 1921, less than two months before the Truce was signed on July 11, haunted my young days. Both young policemen were stationed in Silvermines, my native village, where they were apparently very popular with locals.

They were both off duty on that fateful day when they were lured to a spot near Ardcroney, reportedly by two young women. Both were shot dead and their bodies buried in a nearby bog.

They were exhumed in 1925 and Constable Daly was buried in his native Enfield in Meath. Constable Gallivan, a native of Killarney, was buried in an unmarked grave in Ardcroney.

Now, thanks to the members of the Cloughjordan Heritage Society (birthplace of 1916 signatory, Thomas McDonagh), a headstone has been placed over that grave. The unveiling ceremony was attended by relatives of both young constables as well as by several descendants of local volunteers who were active in the War of Independence. It was, I’m told, an emotional but heart-warming event, infused with a sense of common humanity and decency.

In the most unlikely ways then, even I have to concede that looking back can sometimes prove inspirational.