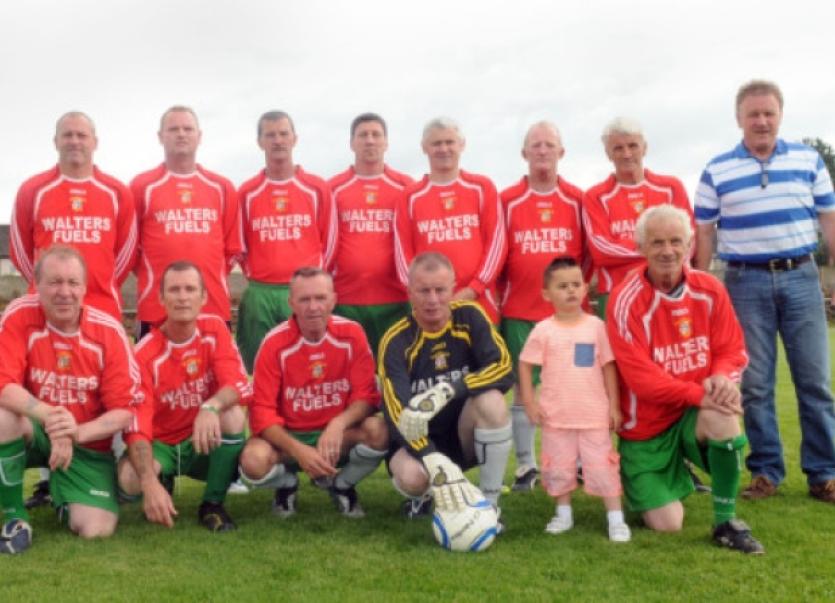 TURLOUGH McNamara looks back on another memorable over-40s soccer tournament which was staged at Pearse Stadium, Janesnoro last weekend.

TURLOUGH McNamara looks back on another memorable over-40s soccer tournament which was staged at Pearse Stadium, Janesnoro last weekend.

Scores of talented footballers dusted down the boots andtook to the pitch to turn on the style once again.

The teams were all in action on a beautiful Saturday afternoon as the tournament got underway and in the opening pair of games Aisling played Fedamore Villa as Summerville clashed with Prospect Priory.

It was last year’s beaten finalists Aisling Annacotty with a goal apiece from David Bowles and Ger McGrath that helped them see off a spirited Villa outfit.

In a nip and tuck battle Summerville with a lone strike from Con Collins just about got the better of Prospect Priory.

Next up were the holders and hosts of Over 40`s as Janesbooro took on Athlunkard Villa and an impressive and fit looking home side eased through on a three nil score-line with goals from Pat McEvoy, Scott Haworth and Anthony Tobin.

It was then a local derby as Geraldines and Fairview were in action and in a tight game that saw defenders excel as it finished scoreless.

In a very exciting and nail biting penalty shoot-out it was the Dines who emerged victors 7-6 on penos as the quality of spot kicks were excellent with the Dines (Kiwi) net-minder Gary Wealleals scoring two as they advanced to round two.

There was also a local derby involving Star and Moyross as this was the fourth time both sides met in the opening round and it was the parish side with a brace of goals from Ray Quinlivan as Niall Pearse also netted in this three nil win.

New boys to the tournament that being Granville who were tasting 40`s for the first time and the Childers Road outfit got a late late winner through Austin McNamara to see off Kennedy  Park.

Next up were Hyde who looked impressive as they eased by Pike in a four nil victory as the goal getters were Pat Koyce, Eddie Parker, John Patterson and Derek Ryan.

The final game to take place in this opening round saw a vastly experienced Balla side face Clare outfit Shannon Hibs and in a rip roaring clash it was Balla who emerged victors by the odd goal in three as goals came from the two (Roberts) McCarthy and Earls the Hibs goal-getter being Frankie Hannon.

THE games in the quarter finals were close and exciting as the quality of football was indeed top class and the large crowd saw some great games unfold and at this stage it was probably still too early to call the outright winner.

In the Summerville v Aisling Annacotty clash it was two well-balanced outfits that clashed and in a game that saw little or few goal openings it took a penalty shoot-out to decide the victors as last year’s beaten finalists Aisling bowed out to a youthful Summerville side losing 6-5 on  spots.

It was the meeting of the Boro and Dines as twelve months ago at the same stage they also clashed with the Boro wining that game one nil and they went one better this time.

A goal in each half saw them book their place in the semi-final with their goals coming from Dathi O Donoghue and Scott Haworth.

The Balla’ and Hyde clash was a real cracker with some spell bounding passages of play unfolding and in a nip and tuck encounter that saw Balla with a late late goal from Kieran McCarthy saw them emerge winners and book their place in Sundays semi-finals.

In the final quarter-final many people fancied Star to overcome Granville but it was the Childers Road based outfit who got the vital break-through as Simon Quinn’s cracker flew to the net as the new boys on the block made it to the semis.

IT was then the penultimate games on Sunday with two top class semi-finals down to be decided. With both games on at the same time spectators took up good vantage spots to view them.

THIS was indeed a close fought encounter as there were little chances of note as two well marshalled defences kept their line in tact as it took a penalty shoot out to decide the winners and it was Balla who proved more accurate winning 5-4.

THE cup holders Boro were now most peoples fancy to advance and in a free flowing game the highly experienced 40s of Boro prevailed on a two nil scoreline as goals from Anthony Tobin and a truly wonderful strike from Daithi O’Donoghue sealed their place in another final.

THIS cup final had everything goals aplenty coupled with some spell binding football from these 40s.

For Balla’ who in the 32 years of this tournament have never tasted victory as in their only final was back in 1995 they lost to Aisling.

Their opponents were going for back to back cup wins and right from the off this cup final came alive as minutes in the Boro took the lead through Scott Howard this was short-lived when Ballas Robert Earls nipped into tie it up.

It was then the holders through Anthony Tobin who regained the lead as just prior to the break Anthony Tobin flashed the ball to the net.

In fairness to Balla they were quickly out of the traps on the re-start when Kieran McInerney cracked a stunner to the net.

Within 90 seconds and it was all square again as Kieran McInerney nipped in and from an acute angle fired a screamer to the net.

With five or so minutes left the holders Boro struck again when Daithi O’Donoghue slipped inside his marker and his firm effort flew to the net and after that Balla could not breach the Janesboro rear-guard as it was the holders who retained their trophy in what was a cracking cup final as full credit to both outfits who gave it their all.

The player of the Tournament went to Ballynanty player Philip Collopy.

THE Over 40s Committee would like to thank Janesboro FC for hosting this tournament and making their facilities available and the hospitality was superb.

A big thanks also to the match officials who were led by Noel Dunphy along with Jimmy Clancy, Paul Power, Nigel Casey, Pat O Brien and Jack Curran.

The victors in the Annual Singing Competition were Kennedy Park.

The main item on the running of this tournament is to raise money for local charities so to all Clubs please return those sponsorship cards as soon as you can.