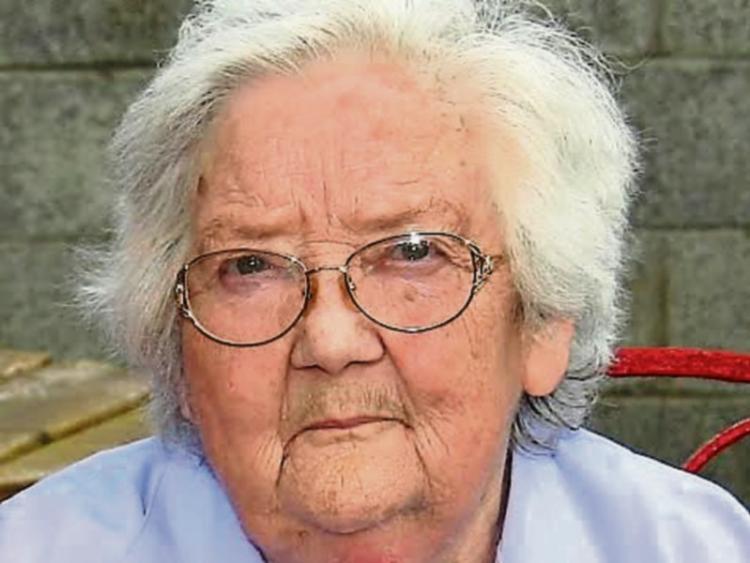 THE parishes of Castletown, Ballyagran and Colemanswell and Rockhill/Bruree were saddened by the news of the unexpected passing of Betty Harrold, The Bungalow, Ballyagran, on Saturday, January 7, at Beech Lodge Care Facility, Bruree.

Betty's popularity was evidenced by the large crowds who called to sympathise during her lying in repose at her home over the two days, her funeral Mass at St. Michael's Church, Ballyagran, and her interment at Bruree.

Betty had spent her life between the two parishes and was widely known and very well respected. She was born at Garryfine, Bruree, and attended school at Killacolla National School. Betty married Tom Harrold, from Belville, Kilmeedy, and together they ran the farm at Garryfine. They had four children. Betty and Tom moved to Ballyagran in 1986 where Tom died in 1992.

Betty was very community minded. She devoted almost 60 years to serving the communities of Bruree and Ballyagran, initially with Bruree ICA. She was involved in all the guild's activities and held every officer position at various times.

Betty held Brannraí (ICA merit awards for proficiency) in crochet, patchwork, hand sewing and dressmaking, crafts which won prizes for her at various shows. She also held demonstrator qualifications in crochet, dressmaking and patchwork and taught these to many surrounding guilds.

The guild was deeply involved in all events in the parish and through this she became involved in the committees of the Development Association and Bruree Festival. She was involved in the festivals held in the old and new halls, the building of the new hall and the development of the old school into the DeValera Museum.

On moving to Ballyagran, Betty's community involvement continued as she once again became involved with the ICA in Ballyagran and the Ladies Club in Castletown. She became known as the lady with the camera and was to be seen at every event in the parish, recording the happenings on film for posterity.

Her upbringing through the tough times of her childhood and early life engendered Betty with a great sense of neighbourliness, a trait which continued all through her life. It was a time when everyone's door was on the latch and no matter how little you had you shared it with your neighbours.

Betty was the kind of neighbour everyone dreams of and her kindness was reciprocated many times over. She liked nothing better than being in the company of people, be they old friends, neighbours or new acquaintances. She had a lifelong interest in local history and had a remarkable recall of events and happenings in the community down through the years.

Betty was very proud and protective of her family from the newest and youngest to the eldest and their lives were a constant and ongoing interest and sense of pride to her.

The Month's Mind Mass for Betty Harrold will be celebrated at St Michael's Church, Ballyagran, on Saturday, February 11, at 7.30pm.