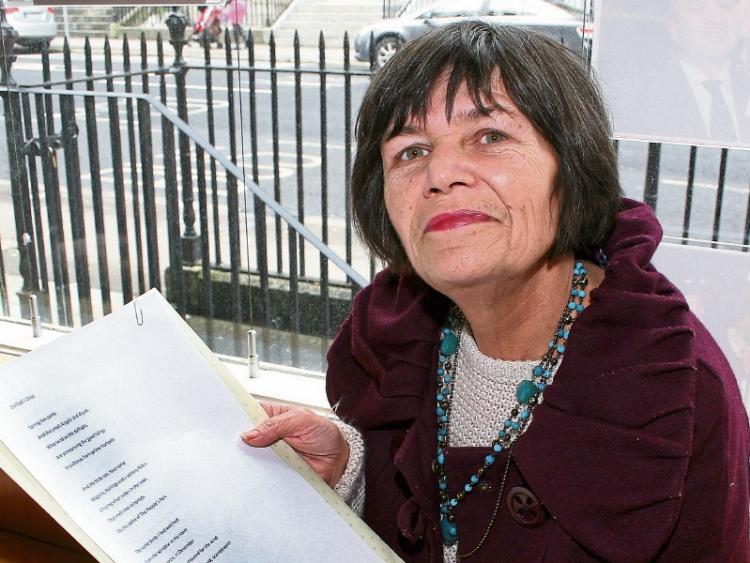 Tributes have been pouring in for Teri Murray

THERE is a deep sense of sadness in Limerick’s artistic community after well-loved poet Teri Murray passed away at the weekend.

Born in Lewisham in South London, Teri grew up in Crumlin on Dublin’s southside, rearing her six children, before moving to Limerick in later years, where she settled in Lord Edward Street.

An esteemed and comprehensive writer, Teri began writing in the 1980s, and was the winner of the Wicklow Drama Award in 1987 for a children’s play.

In 1991, she was commissioned by artist Brian Maguire to write a series of poems to accompany his paintings ‘Behind Bars – Public and Private’.

She was editor of ‘Scratches on the Wall’, an anthology of Limerick writers published by Tholsel Press in 1995, and wrote ‘A Time Under Heaven’, a play about the history of the Treaty City the year later.

It was not until 1998 that her first collection ‘Coddle and Tripe’ was published by Stonebridge, alongside the late Liam Mulligan.

Poems from this collection were performed at her removal on Monday evening, while her lifelong friend Louis Mulcahy performed an Irish lament at a packed Cross’s Funeral Home.

Once her first collection was published, there was no way of stopping Terri.

Poems from the Exclusion Zone appeared in 2001, and later that year, she won a poetry contest which took place during the Eigse Michael Hartnett in Newcastle West.

A children’s book, Eddy the Teddy and The Big Fat Nana was published in 2003, with her third collection of poems following in 2007, the Authority of Winter.

Where the Daghda Dances followed in 2010, and Under the Linnet’s Wing five years later, with a DVD of her selected and new poems ‘A Ripening of Apples, A Ripening of Berries’ was released last year.

Teri’s work won praise from many luminaries including Senator David Norris, who described one of her pieces as an “absolutely haunting and beautiful piece of work”.

Ciaran O’Driscoll, a poet and member of the high-profile poets group Aosdana said that Terri's ‘Where the Daghda dances’ collection showed her to be “an accomplished seamstress of poetry”.

Despite her many achievements in the literary world, Teri remained down to earth, always happy and willing to support new poets, as well as being a staunch supporter of the Open Mic poetry nights which took place initially in the White House and latterly in Tom and Jerry’s Pub and Brendan O’Brien’s in Roches Street.

This is something which has stuck with Corbally man Edward O’Dwyer, who at 32 is already widely published.

“One thing about Teri is she absolutely loved to sing and had an incredible database of songs and at the drop of a hat she could summon all the lyrics to so many different kinds of songs,” Edward said.

In recent years, he had encouraged Teri to write a memoir of her life, he felt it was so interesting.

“She didn’t have an easy life. It was quite tough at times, but she always had so much that she was endless grateful for, all the same – her sons, the love of her life, Liam, her friends and the love of poetry,” he said.

Edward – who described Teri as “the First Lady of the White House” – recalls watching the faces of newcomers at the poetry readings and seeing “the very process of their being blown away”.

“She was one of a kind, an immense person and poet,” he concluded.

Dominic Taylor, the Limerick Writers Centre, added: “She never sought recognition for her poetry, but all who heard her read were struck by the heartfelt honesty of her work. She had many setbacks, but she always rose above them, and used her life experience as an instrument of awareness in her poems.”

Close family friend Mairtin O’Brien said it is because of this that people identified with her.

“A great observer of life, a person whose experience of life enriched her understanding of other people,” was how he put it.

Last year, Teri, at the request of the Irish Cancer Society, wrote a poem about beating cancer for Daffodil Day.

At the time, she refused to describe herself as a “cancer survivor”, having initially beaten the condition.

“I’d prefer to think of myself as someone who had an experience with an illness,” she told me.

Tragically, this cancer returned and took her at the desperately young age of 60.

She will be sadly missed by her loving family, sons, daughters, grandchildren, sister Brenda, and her large extended family and friends. May she rest in peace.