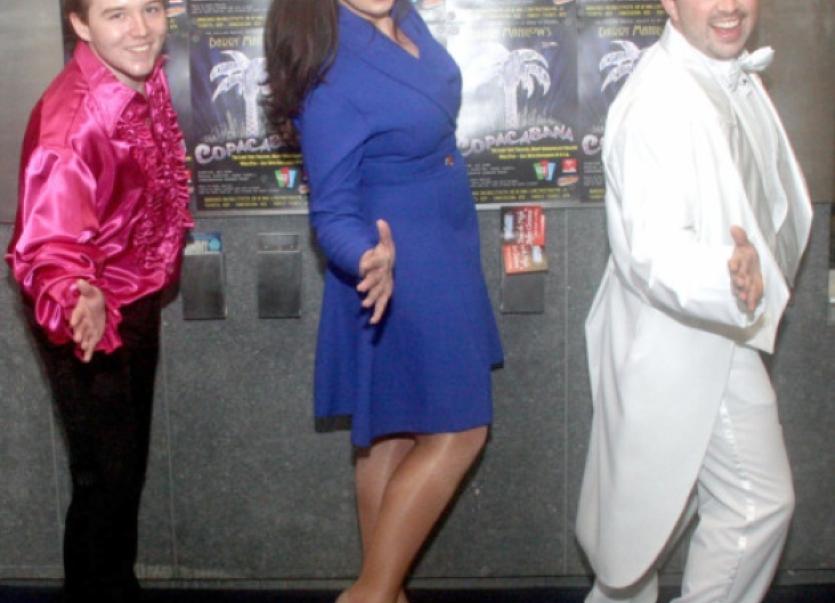 Born in Limerick, I moved to Longford, and then to Cork.

Born in Limerick, I moved to Longford, and then to Cork.

Finally, and thankfully, I came back to Limerick, with my parents, Jeff and Susan, after a number of years of driving down every weekend. My mom really missed home very much. There was nothing like arriving at my Nana’s house on a Friday evening. Not so much fun hitting the road, though, on the following Sunday night. Currently, I reside in Castletroy. Although I have a sister called Laura no one else in my family sings or performs. There is a four year age gap between us with me being that annoying younger sister who sings constantly. However, Laura has always been my biggest fan coming to every show and applauding my every performance.

For my education, I went to the Salesians Primary School and, then, on to the Crescent College Comprehensive Secondary School.

Both schools encouraged pupils to play to their key strengths. Whether you were academic, musical or athletic, you were helped to develop those talents and to become a more rounded individual. Later, I went on to study at the Guildford School of Acting, in London, from which I graduated with a first in Musical Theatre. Whilst at college, I played some fantastic roles including Frenchie in Destry Rides Again, Martha in The Secret Garden and Carrie in Carousel. I, also, received the Sir John Gielgud Award for Musical Theatre and was chosen to perform in a workshop with Songs For A New World writer Jason Robert Brown. My favourite role at college was that of Lily in A Man Of No Importance. I got a real sense of pride from playing an Irish role in this final year production based on a book by Terrence McNally. I was the only Irish person in my college that year. Needless to say I put in some hours coaching my classmates the proper accent.

For a number of reasons I love performing but primarily for its escapist qualities.

It is a luxury to play the role of someone you could only ever dream about being. I also love the entertainment aspect of it, seeing the audience’s reaction and trying to influence that through your performance. It is a huge honour to perform for people. That said, it is sad to see so many of our young people having to travel abroad for professional musical theatre training. The standard of training in Ireland is very high so we could easily service a Musical Theatre School or even a series of them. The theatre scene in Ireland, particularly in Limerick, is very resilient. It is not easy to keep us down. I love the way Limerick actors create their own destiny. They do not wait for things to fall into their laps. I have massive respect for that.

From a very young age, I used to create characters and to act them out.

Today, I often wonder if I would have made a good teacher. I love working with young people and I am certain that I could make any Shakespearean lesson a little more interesting. My mother recalls that, as early as two years of age, I would sit in my grandmother’s kitchen, pretending to be a married woman called Jacqueline, and discussing how many children I had. We have some hilarious home videos of me doing just that. I used to learn scenes from movies and act them out. I fell in love with performing and it became my passion without a doubt. Thankfully, I have very supportive parents who did everything they could to help me along the way.

I became a mother myself just nine months ago and I have to say that it is the most incredible role I have ever played.

Laurie (named after my sister Laura) is becoming a real little character already. Hopefully she will follow in my footsteps although her Dad is hoping that she will be an Olympian. No pressure there! Hopefully, she will follow in my footsteps. Getting married to partner Kevin, in March, is something to really look forward to. It will be an all singing, all dancing affair. We are planning to go to New York on honeymoon having been there only a few years ago. For my other half it was the first occasion that he had seen me speechless. We got to see Al Pacino in the Merchant of Venice - an experience which was out of this world.

After a long break from performing, following the birth of my daughter, I decided to get involved locally again.

It was nerve wrecking but I was thrilled to see it through. I have been involved in local productions since the age of ten with various groups including Expressive Arts, Centre Stage and Limerick Musical Society. I am also currently rehearsing for the Cecilians production of Copacabana. This is my first production with the Cecilians, but everyone has been really welcoming. I am really looking forward to playing the role of Gladys in such a fantastic, energetic show plus I have some great comedy lines. It is going to be a spectacular production with an incredible cast. The dedication and commitment has been huge and once again Limerick is coming-up trumps with a unique sense of occasion. Tickets sales are already brisk.

Being European City of Culture 2014 is a huge honour for Limerick.

We have so much to be proud of here and our city is literally bursting with talent. It is going to be an incredible year for everyone. Limerick people always rise to a challenge, and this year, in particular, we will show the world why we are all so proud of where we come from!

Jessica Bray sings in Copacabana at The Lime Tree Theatre, from Wednesday, November 27 until Saturday, November 30 at 8pm. Telephone the box office: 061- 774774 or book your tickets online from the website:  www.limetreetheatre.ie