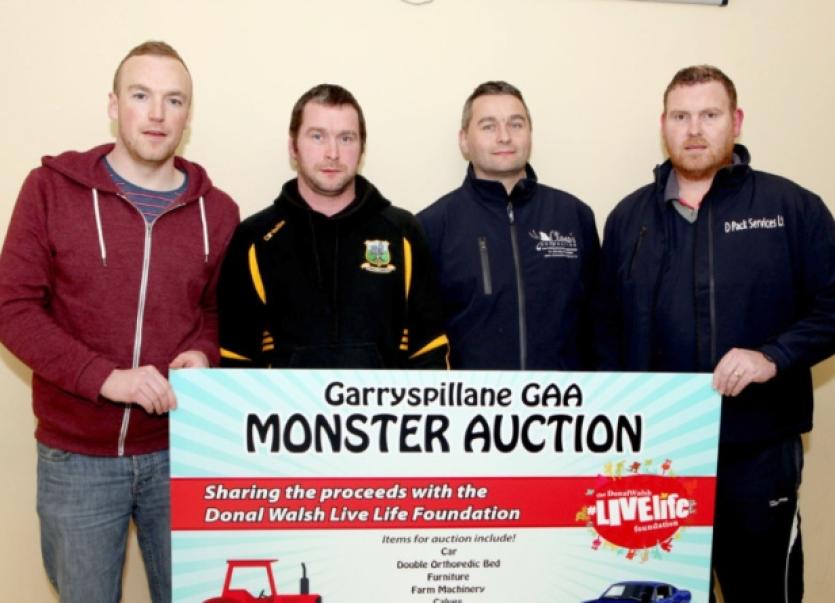 GARRYSPILLANE GAA is helping to spread the word of the late Donal Walsh and raise money for the club.

GARRYSPILLANE GAA is helping to spread the word of the late Donal Walsh and raise money for the club.

A monster auction - featuring everything from a car to calves - takes place at 1pm on Saturday, March 28 in Knocklong Community Centre. The event was launched on Friday night in front of a large crowd including Limerick senior hurling manager TJ Ryan, inter-county star James Ryan; the great Frankie Carroll and Donie Ryan, who have all lent their support.

A new committee, set up just after Christmas, decided to host a fundraising event for the club. As the late Donal Walsh’s father, Fionnbar, hails from Knocklong they decided to share the benefits with the #Livelife foundation.

“They were delighted when we got in touch with them,” David Ryan of Garryspillane GAA.

“Fionnbar works in a hotel in Bantry and gave us a weekend family break in the hotel, worth over €300, for the auction. It gives us the opportunity to get involved with that charity, help them and show the goodwill from the area,” he added. The committee have compiled a huge array of items and services in just a few short weeks.

“We wanted to do something different. The idea of an auction came from one of our players, Micheal O’Donnell, who heard about a club in Cavan doing it. We have a Ford car from Dan Dooley, three months membership of a leisure centre, three months greyhound training fees, veterinary practices have given doses for cattle, farmers have given calves, animal feed has been sponsored, trailers of firewood, turf, coal and farm machinery. “Jimmy Buckley got in touch to say he was giving us a night’s entertainment for dance halls to bid on.

“TJ Ryan is giving us his Bainisteoir T-shirt from the Munster final,” said David.

And that is just some of the items up for auction, which will be expertly handled by Joe Wheeler and Pat Dooley.

Anything and everything will be gladly accepted. They will all go to the highest bidder and monies raised will go towards the ongoing running of Garryspillane GAA Club, improve facilities and help the Donal Walsh #Livelife Foundation.

His family set up the charity to bring forward his causes of providing age appropriate teenage facilities in hospitals and hospice centres, as well as promoting his anti-suicide message.