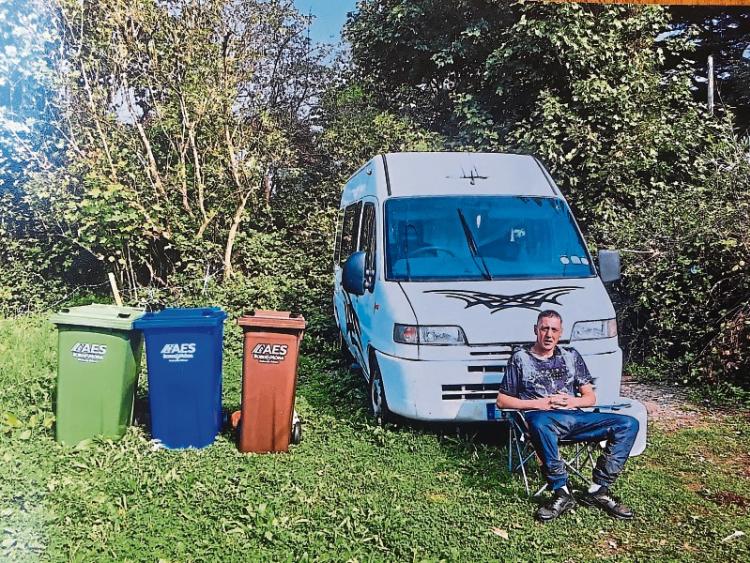 A LIMERICK city man, who is living in an old campervan with no running water or electricity, has been ordered to remove it by the council.

Conor Kelly, aged 39, is residing in a field at Mulcair Drive, Annacotty. Limerick City and County Council have issued him with an enforcement notice. In a letter delivered to Mr Kelly, the local authority says, “There is no record of a planning permission being granted and is therefore unauthorised”.

Conor asks: “How do you need planning permission for something that you can drive away?” The single man says he is homeless.

“I was all over the place. I was everywhere,” said Conor. A couple of months ago a friend, who owns the land, “asked me did I want to stay there”.

“I brought a caravan out first in August but the council decided I needed planning permission for a caravan. I don’t know why I needed it because it is stuck in the ground. They said the caravan could stay there but I couldn’t stay there. They told me to take away the caravan so I got rid of the caravan and I got a campervan instead,” said Conor.

He continues: “Now the council tell me I need planning for a campervan but how can you have planning permission for something that you can drive away?”

Conor says he came home two weeks ago to find the enforcement notice on his bed in the campervan.

“I got the neighbour to call the gardai because somebody had entered my property and hand delivered it. That is like breaking into a house,” said Conor.

Originally from Claughaun, he says he has been on the homeless list for 14 years.

“What can I do? Where else can I go? I’m staying here. I don’t want to go into a hostel. I can’t afford a flat. I’m on disability.

“I’m not bothering anyone. I’ve not involved in anti-social behaviour. I even signed up for proper bins – they were collected this morning,” said Conor. He says he washes himself with a five litre drum of water and sleeps with 15 blankets over him. Following a Leader query, a council spokesperson said they didn’t comment on individual cases.