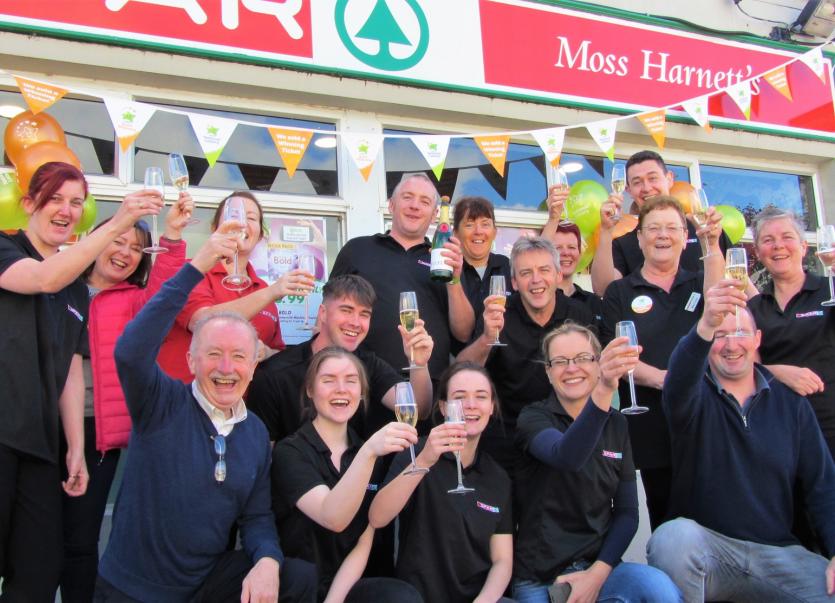 THE owner of the Limerick store which sold a winning Euromillions ticket says the buzz has been incredible since news of the windfall emerged on Friday night.

The holder of the Euromillions Plus ticket, which was sold at Moss Harnett’s Spar, Abbeyfeale on Tuesday, is €500,000 richer having won the top prize in the draw.

The National Lottery says there were four Irish winners of the Euromillions Plus draw with each winning half-a-million euro.

“This was only the second time in the history of the game that Ireland had four EuroMilllions Plus top prize winners in the one night,” said a spokesperson.

The other winning tickets were sold in Tralee, County Kerry; Collooney, County Sligo and online at www.lottery.ie.

“The luck of the Irish certainly continues for our players in the EuroMillions game. Players in Ireland are enjoying a bumper year in the EuroMillions Plus game with 26 top prize winners of the €500,000 top prize. We look forward to welcoming all of last night’s big winners into National Lottery headquarters next week,” added the spokesperson.

Darren Moynihan who took over Moss Harnett’s Spar earlier this year, says everyone is the town is delighted.

“It’s electric here this morning, everyone is asking the question who is it or was it a local? It’s hard to know but hopefully it is someone local, some family that needs it or something but we have a passing trade here as well,” he told the Limerick Leader adding he only learned of the windfall on Saturday morning.

“One of the girls at work here had sent a message at half eleven last night but I was actually in bed and when I woke up this morning I got the message from her. There were a good few on Facebook who had heard about it but we had no confirmation until about 7 O’clock when the area rep for the lotto rang me,” he added.

The National Lottey says the winning ticket was a “normal play” ticket which means it was not a Quickpick and that he winning player chose their own numbers.

“We have a good few loyal locals who will always come in and they will always write out their own (numbers) so it sounds like it could be a local,” said Darren.

We have a record matching 4 top-prize winners on tonight's #EuroMillions Plus draw. Players in #Kerry, #Limerick, #Sligo and an Online Player have matched all 5️⃣ numbers drawn & won a top-prize of €500,000 each. Check tickets now in-app or at https://t.co/YZLwqbZ2DF pic.twitter.com/2vC9q2gYFX