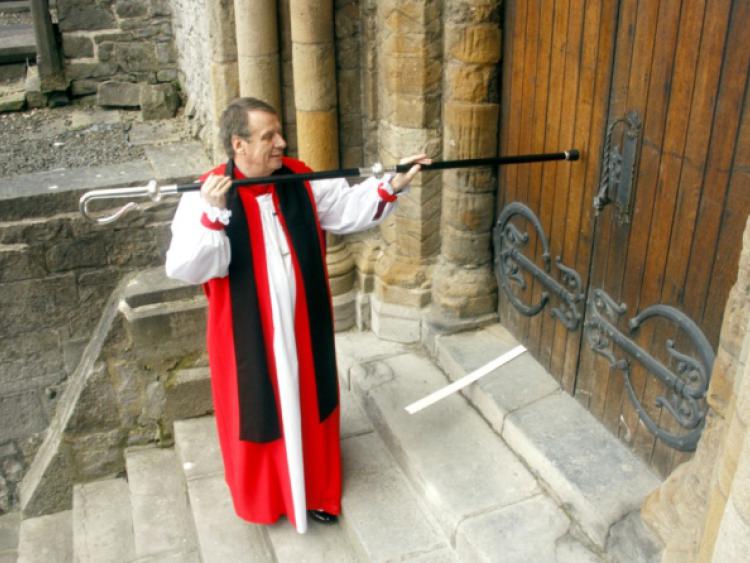 the newly installed Church of Ireland Bishop of Limerick and Killaloe Dr Kenneth Kearon has appealed to people to reach out to “strangers, the lonely and the isolated” in his first sermon in the diocese.

the newly installed Church of Ireland Bishop of Limerick and Killaloe Dr Kenneth Kearon has appealed to people to reach out to “strangers, the lonely and the isolated” in his first sermon in the diocese.

Dr Kearon was enthroned at a ceremony at St Mary’s Cathedral on Saturday and delivered a sermon that dwelt on ideas of community and identity in “western post-modern society”.

Members of the Church of Ireland itself, he said had in recent years “moved from being a very closed community, living to ourselves and defining ourselves against the majority religious community. We have moved from that to a situation where we are now fully integrated into Irish society.”

One of the readings at the ceremony had delivered an important message of reconciliation, Dr Kearon said.

“And our world badly needs to hear and receive that message of reconciliation. The surge of extreme violence in the name of Islam is terrifying; but is there nothing we can do?

“We in Ireland know to our cost that much religious inspired violence has its roots in alienation so perhaps we should ask how a Muslim teenager feels living in this city. Does he or she feel comfortable and at home, or is rejection and alienation part of their experience? In our country, some of our politicians and even our President have experienced frightening protests. Is this purely about water, or is there a deeper, more worrying feeling of frustration at being out of control?

“Christians,” he continued, “bring to any discussion of community their own distinctive model of a reconciled community where welcoming the stranger, including the lonely and the isolated, and participating in the transformation of the world around us are central. Within that, the Church of Ireland in these parts brings its own experience and perspective, as a community which in the last 50 years or so has moved from being somewhat at the fringe of Irish society to full integration and participation in Irish life.

“So then, questions about identity and belonging abound. Christians respond with an understanding of community rooted in the reconciliation we have experienced in Christ and which leads to a vision of communities which are both reconciled and reconciling.”

Dr Kearon, a native of Dublin, succeeds Trevor Williams as Bishop of Limerick and Killaloe. The ceremony on Saturday featured the tradition of the new bishop seeking to gain entry by knocking on the rarely opened west doors of St Mary’s three times with his staff. He was admitted by Dean Sandra Pragnell and led to his seat before a congregation that included Catholic Bishop of Limerick Brendan Leahy, Rev Vicky Lynch, the Methodist minister of Christ Church Limerick and representatives of Limerick’s many other faiths.

Also present were Minister for Education Jan O’Sullivan, Mayor Kevin Sheahan, Mayor Michael Sheahan and Garda Chief Supt David Sheahan. Welcoming an old acquaintance in Dr Kearon to Limerick this week, Bishop Leahy said: “I have known him for many years from the time he was Director of the Irish School of Ecumenics in Dublin where I was a lecturer.

“He is a very kind man, full of energy and enthusiasm, not least for ecumenism and Limerick will be all the better for his presence here. I wish him and his wife and daughters a happy time here and that the blessing he bestowed on the city of Limerick when he opened the great doors of the cathedral on Saturday will be returned to him and his family many times over.”