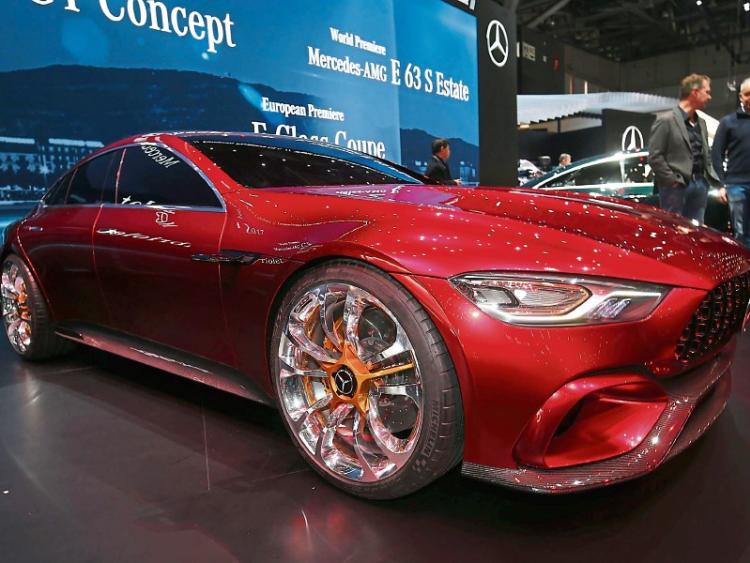 More than 180 exhibitors presented at the show, and around 700,000 visitors are expected to throng the halls before the show ends. Here are just some of the exhibits on show.

Nissan showed an updated Qashqai, with a more aggressive grille treatment, and a new premium grade aiming it at upper-class competition in the compact SUV market. Powertrains are as before and the car will go on sale in the summer. It is Europe's best selling crossover, so things can only go upwards from there.

The Range Rover Velar is a new model which slots between the Evoque and the Sport. There's a strong market here for premium SUVs, and it is also very competitive indeed, but it should be able to make inroads easily enough on the basis of siblings' performance. Updated versions of the JLR Ingenium engines range will help power that.

Volvo's new generation XC60 medium SUV has much about it now familiar from the XC90 and the S90 and its wagon variant.

The model, responsible for almost one in three sales of the brand, now comes with a wider range of powertrains, including the T8 Twin Engine petrol plug-in hybrid delivering 407hp and acceleration from 0-100 Km in 5.3 seconds. For the rest of us, there's a choice of petrol units with between 190hp and 320hp.

The very latest car from the DS premium brand of PSA Group is the DS 7 Crossback, a brand new SUV which has a plug-in hybrid powertrain offering a total of 300hp in power. Other engines will include three petrol units and two diesels, ranging in power from 130hp-225hp.

The brand has been waiting for sometime for this one, with which it hopes to jump the newly-separate brand into serious premium contention.

Citroen had two new concept cars making their world debuts: The C-Aircross Concept that previews their global offensive into the compact SUV segment, and is close to production. It has style cues from the new C3. It will work well in urban situations but the proven Grip Control will take it through rugged terrain, sand and mud. Comes with lots of connectivity.

Renault gave prominence to a mid-life revision of the Captur, keeping the nifty two-tone body colours, but rejigging the front end to bring it into line with more recent new models. There's new improved interior detailing, and the Capture can now be had with all the safety and connecting technology that its bigger siblings have. It is the top selling small SUV in Europe.

The Alaskan Pick-up was also on full display.

Skoda had a colourful stand featuring the new 245hp Octavia RS 245, which will be a reasonably accessible hot saloon and combi, as well an upgraded Octavia Scout. The Scout off-road theme has also been added to the new Kodiaq large SUV range. And at the other end of the scale, a new 1.0 engine for the Fabia will suit a lot of new young customers.

Peugeot, smiling faces all over the place because the 3008 was awarded the European Car of the Year accolade, had a ‘wow’ factor concept at Geneva with its Instinct.

The idea is that it is autonomous and connected, though with a 300hp plug in hybrid powertrain. The Instinct will automatically link the occupants’ devices to the cloud, for seamless access to all their work and leisure stuff.

Toyota has revised its Yaris supermini, with a detailing reflecting the current Prius showing on the exterior and an upgraded interior. A Yaris GRMN performance version is inspired and influenced by Toyota’s return to the World Rally Championship in 2017 with the Yaris WRC. It will be powered by a supercharged engine – a 1.8-litre unit that will produce more than 210hp.

The new generation SEAT Ibiza has strong and neat styling and is so important to the brand as its best selling model. It will have available the driving assist systems already available in the Leon and Ateca, but is likely to be as attractive as an alternative to the parent company’s Polo, smarter and connected. It arrives in Ireland in the summer.

At the Opel stand, all eyes were on the second generation Insginia with the new Grand Sport and Sports Tourer variants making their world premieres; and on the Crossland X urban crossover which also made its public debut. It comes with ultra-modern technologies.

Opel’s Ampera-e with a range of 520kms, and the Insignia Country Tourer will be models for the future here in Ireland.

Ford’s new Fiesta ST has a brand new 200hp 1.5 engine, with three cylinders and a 6.7sec sprint to 100km/h. It features selectable drive modes including a Track setting for those who want to pump all those horses on a closed circuit. The car won’t make it here until early next year.

BMW showed off its latest version of the new 5 Series, the 530e iPerformance plug-in hybrid variant of the car that is the heart of the BMW brand. It is the sixth member of the iPerformance versions of the brand’s cars, and BMW claims fuel consumption as low as 1.9L/100km and CO2 emissions as low as 44g/km.

Also on the stand were the fifth generation 5 Series Touring, the M4 Convertible, and an i8 Special Edition Protonic Frozen Black. 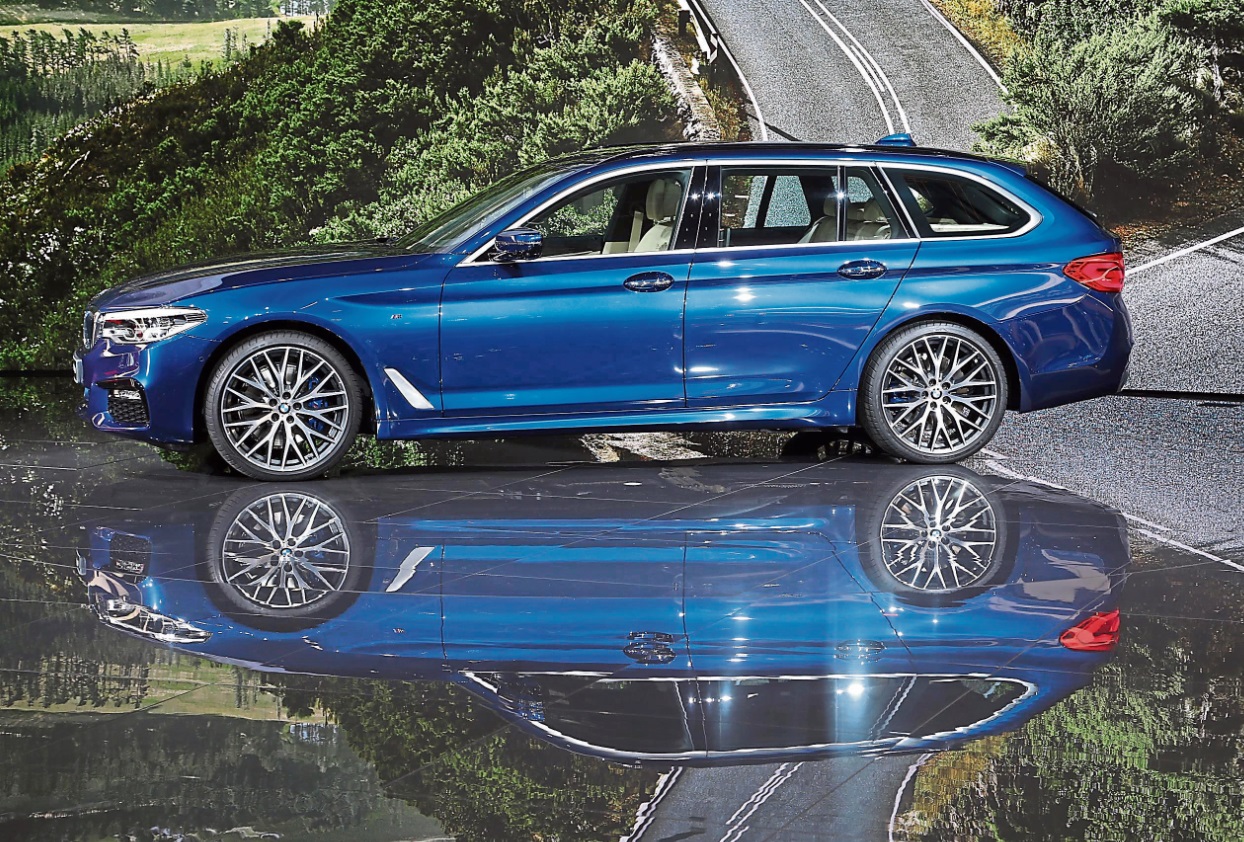 Mitsubishi’s new production SUV, the Eclipse Cross, will add a sub-Outlander offering to the brand’s range which should seriously raise the image and sales performance of the company, putting them in a segment where there’s serious growth. Powertrains will be 1.5-litre turbocharged petrol or 2.2-litre turbocharged diesel engines with a new 8-speed automatic transmission.

The petrol version will be on sale in Ireland in January 2018, with the diesel to follow later.

VW debuted its new Arteon, a large coupe saloon that replaces the CC, which will have a choice of 1.5 and 2.0 TSI petrol engines and three versions of a 2.0 diesel. The Tiguan Allspace is probably the most practical vehicle the company has at the show, is a longer version of the latest generation of the SUV and comes with a 7-seat option.

The showstopper at the Mercedes-Benz stand was the AMG GT Concept, a 4-door addition to the M-B AMG GT ‘family’. A less than 3sec sprint to 100km/h is a signature figure for what the brand calls a ‘hypercar’, the next level above supercars. A hybrid powertrain with a 4.0 V8 petrol engine and high performance electric motor will offer more than 800hp.

More likely to attract buyers even here, though, is the stunning cabrio version of the E-Class, shown here in E400 4Matic guise and with all the head-turning anyone would want.

Kia revealed its new Stinger sports sedan, due here before the end of the year. It will be available, depending on market, with a 255hp 2.0 turbo petrol engine, a 370hp 3.3 twin turbo V6 and a 2.0 diesel with 200hp. Rear-wheel-drive or AWD will be the drive options. At the other end of the scale are the new Picanto (below), in Ireland in May, and a plug-in hybrid version of the Niro compact SUV.

Mazda’s new CX-5 has been strongly reworked with a more in your face grille and some sleeker metalwork. Refinements to the engines offering, better ride and handling, and a significant upshift in interior also features in the car which arrives in European markets in the summer.

The Concept Car of the Year at the show went to the Renault Trezor, an all-electric GT; while the Lexus LC luxury coupe was named 2016’s Production Car Design of the Year at a gala ceremony in Geneva.