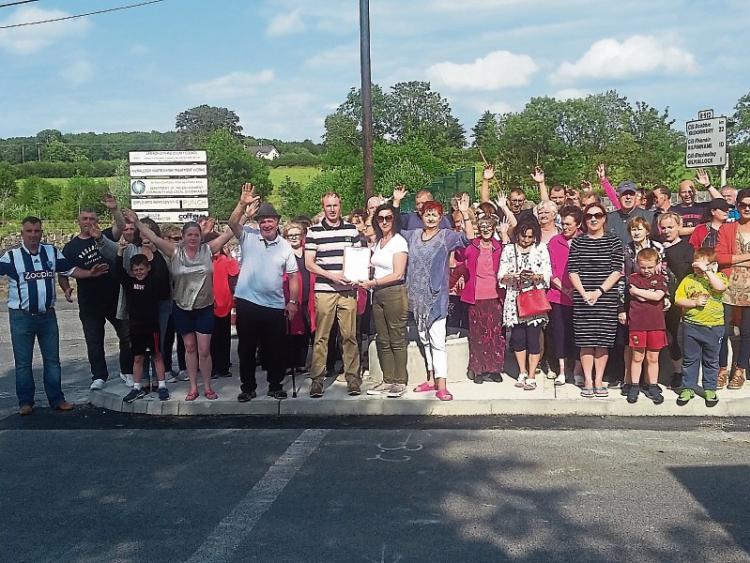 NEWLY-ELECTED councillor PJ Carey has submitted a proposal to engineers to solve a traffic problem that has driven local residents around the bend.

Over 350 have signed a petition against the narrowing of the entrance to Glenfield and Radharc na Cille housing estates in Kilmallock. It is part of ongoing roadworks to narrow the road into the town from the Bruree side.

Josie Burke, who organised the petition, has also made a complaint to Kilmallock gardai on road safety grounds. She says the council have basically halved the entrance in size.

“The works include narrowing the entrance at the Glenfield/Radharc na Coille housing estates. Upon entering the estate there is an immediate left turn serving the front row of houses. This will lead to major problems as two cars will not be able to pass at the one time,” said Cllr Carey.

He also questioned the wisdom of widening the River Loobagh bridge whilst narrowing the road 20 yards up from it, thus creating a “bottleneck”.

“Narrowing the road will lead to gridlock when the school re-opens in two weeks,” said Cllr Carey, who has submitted a proposal to the local roads engineer to widen the entrance to the estate immediately.

“This can be achieved by removing two concrete bays measuring 1.8m by 1.8m. The residents have voiced their frustration about the works as well as their safety concerns via a petition which was handed to me on August 5.

“Although an open discussion was held in Kilmallock on October 18, 2018, none of the residents with whom I spoke to were aware of it,” said Cllr Carey.

He pointed to the petition – over 500 signatures – in neighbouring Bruree against narrowing the road  to the village.

“It is further evidence of the lack of information to residents and the need for greater transparency. We need a more open process of engagement to inform and include residents and the larger community in roadwork projects such as these.

“I will also be seeking answers as to why council staff could not carry out works such as these. If the council does not have the staff to carry out such works I would like to know why not. If they do have staff capable of carrying out works such as this, then why are they employing a private company.

“I hope that my proposed solution of removing the afforementioned concrete bays will be implemented as an interim corrective action and I look forward to the co-operation of my fellow councillors in following up on the remaining issues,” said Cllr Carey.