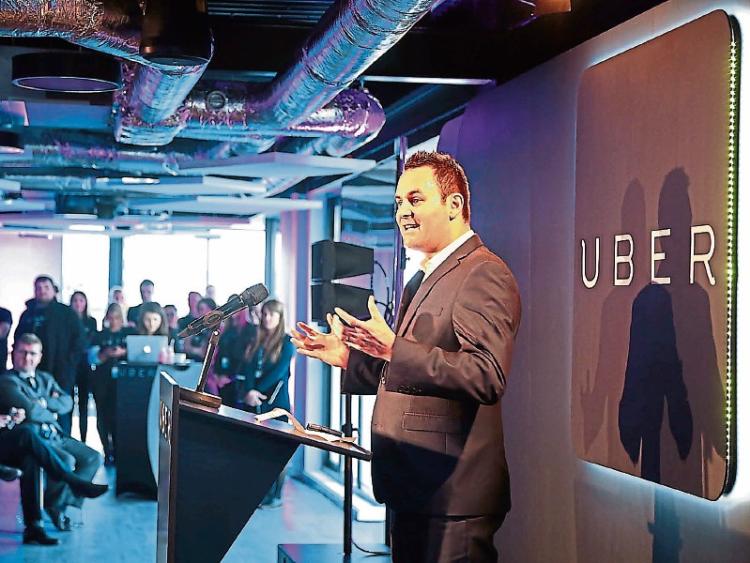 Kieran Harte, the Ireland manager of Uber, speaking at the opening of the firm’s premises at the Thomas Street/Catherine Street centre back in early 2016

LIMERICK taxi drivers have welcomed the news that Uber will not be able to set up a ride-sharing service in Ireland, as it does in other countries.

It emerged this Friday that the National Transport Authority (NTA) has told Uber – which employs 300 people in its Catherine Street operation – that its model was not appropriate for this country.

Uber links passengers with private car owners through an mobile app, and has attracted huge opposition from taxi drivers worldwide. This is because in effect Uber’s model allows every day drivers to operate taxi services.

Jude Williams, who heads up Treaty Cabs, said the NTA disclosure – uncovered through a Freedom of Information request from RTE – was “fantastic news for the taxi industry of Ireland.”

“If they were allowed operate, because Ireland is so small and more so Limerick, it would wipe out the taxi and hackney industry in literally a month,” said the boss of the Davis Street firm.

He said: “I never agreed with the profile of it. The numbers are not in this country for it. Perhaps you might get away with it in Dublin, but in places like Limerick, where the population is so small, it would be unlikely to happen. You either have a taxi industry or you do not. If any Joe Punch-clock can just come in and do my job, it just defeats the purpose”.

Mr Hatton admitted he was surprised that Uber’s plans were blocked by the NTA, because of the fact the firm has made such a big investment in Limerick.

The NTA told Uber in a disclosure: “Operating parallel regulated and non-regulated regimes, even on a pilot basis is undesirable in our view and can only serve to undermine the regulated transport system.”

Uber – which declined to comment when contacted by the Leader – operates ride-sharing services in Britain and the USA, but a raft of European countries have already banned the practice.