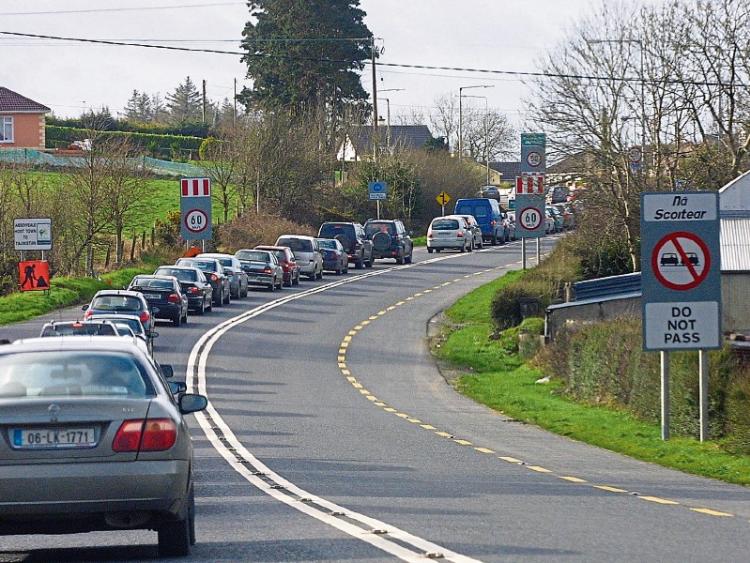 A line of traffic entering Abbeyfeale on the N21 from the Limerick side. Temporary repairs are needed at Mountmahon

LIMERICK councillors are  dismayed and incredulous that Transport Infrastructure Ireland (TII) is to spend €100,000 on temporary repairs to the N21 at Mountmahon, Abbeyfeale later this year and then return to do a proper job next year at a cost of €500,000 and upwards.

“It just beggars belief,” Cllr John Sheahan FG said, pointing out that the TII had known about the problem for the past two years.

“People will ask what are we doing,” declared Cllr Liam Galvin Fine Gael.

“Are we going to have two years of total disruption at Mountmahon?” Cllr Francis Foley FF asked.

“I think it is a shame they can’t just go in there and finish it.”

The N21 main road going through Abbeyfeale has partially collapsed at a number of places at Mountmahon, at the entrance to the town. At previous meetings, councillors have warned of the dangers there, as vehicles try and avoid the sunken sections and a flashing road sign was erected to alert drivers.

“It seems to me a clear waste of money,”Cllr Michael Collins FF said. And he asked the council officials to go back to the TII and plead with them to do the full job.

“I can fully appreciate the feeling coming from you all,” Robert Gallagher, senior executive engineer said. “I do know Limerick City and County Council has been highlighting this issue with TII. I can’t defend TII’s action. All we can do make the case. It is only in the last month that TII allocated the funding. A lot of that is down to the furore you made.”

“The truth is we don’t know,” Mr Gallagher said.

The remedial works could be done very quickly, he added.