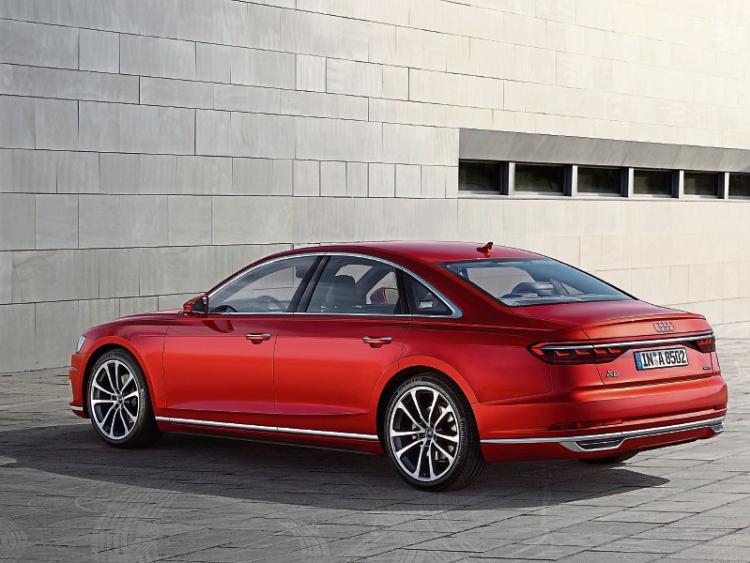 THE new Audi A8 has made its world debut at the Audi Summit in Barcelona as the premium carmaker’s flagship model and ‘the future of luxury class’.

Audi say the car signals the dawning of a new design era for the entire brand and that the car’s design represents the core attributes for which the brand is renowned worldwide - sports appeal, lightweight construction and quattro permanent all-wheel-drive.

In its fourth generation, the A8 has a contemporary new design, innovative touchscreen operating concept and a systematically electrified drive.

It is also the first production car in the world to have been developed for highly automated driving.

Compared to its predecessor, the A8 has grown substantially in length in both body versions.

The car has a 10.1-inch touchscreen display when, when off, blends almost invisibly into the high-glass black surround thanks to its black-panel look. The user interface appears as soon as the car is opened.

The driver controls the infotainment system with fingertip control on the large display. The driver can use a second touchscreen display to access the air conditioning and comfort features as well as making text inputs. The A8 can also engage ‘in intelligent conversation’. The driver can activate an array of functions in the car using a new, natural form of voice control.

From 2018, Audi will gradually be taking piloted driving functions, such as parking pilot, garage pilot and traffic jam pilot, into production.

The A8 will launch in Ireland with two extensively reengineered V6 turbo engines: a 3.0 TDI diesel with 286bhp, and a 3.0TFSI petrol outputting 340bhp. An eight-cylinder version - a 4.0 TDI with 435bhp will follow soon afterwards.

The exclusive top engine version is the W12 with a displacement of 6.0 litres.

All engine variants operate in conjunction with a belt alternator starter which is the nerve centre of the 48-volt electric system.

The mild hybrid technology allows the car to coast with the engine switched off, and to restart smoothly.

The A8 long wheelbase e-tron quattro with its powerful plug-in hybrid drive will follow at a later date.

Irish prices to be announced at a later date.