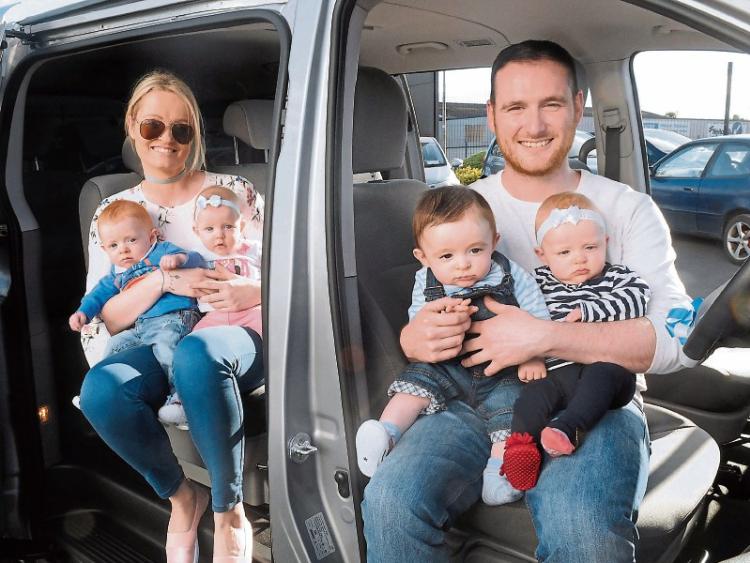 AT ONLY eight months old Max, Alex, Ashley and Kayla are too young to shout “Are we there yet?” but at least they can all be together in a car.

Up to now, the proud parents of the quadruplets, Lisa Fenton and Wayne Downey, had to take two vehicles when they wanted to hit the road.

They collected the keys to a 2015 eight seater Hyundai Montana from Limerick Motor Centre on the Tipperary Road so can now travel as one family. Lisa said the new mode of transport was “badly needed”.

“It’s hard to believe but they’re eight months old now. Whenever we were going anywhere we had to take two cars. Obviously we knew we needed to get a new car but it wasn’t a major concern at the start because we were so focused on them.

“Now that they are getting bigger we can take them more places and we had to start thinking about a vehicle,” said Lisa, from Ballyneety.

After doing their homework they found a seven seater wasn’t big enough for all their gear.

“There is no space for the quads’ buggy and stuff like that. We had to find something with a bigger boot. We had a look around and they are not very plentiful. We wanted to support a local company and we found the Hyundai Montana at Limerick Motor Centre. Gerry O’Brien and all the staff were a pleasure to deal with,” said Lisa. 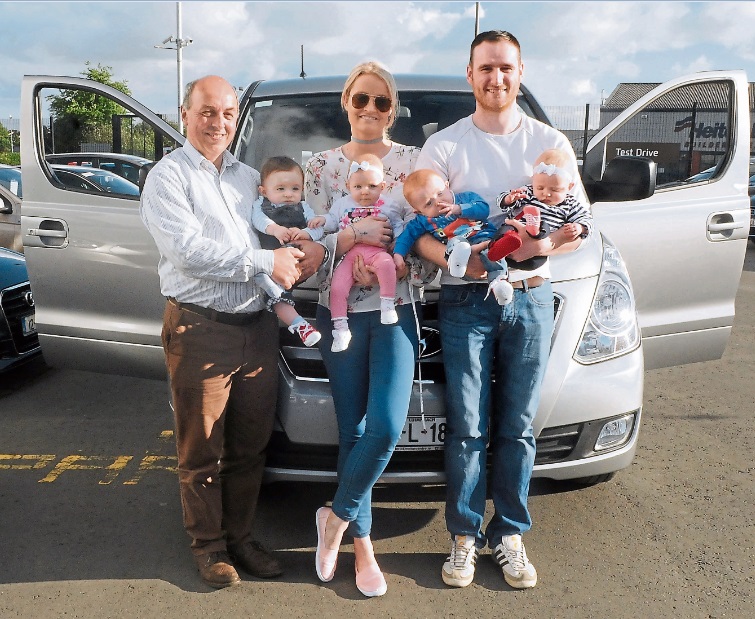 What made it the perfect match was that Ireland's longest serving Hyundai main dealer raised €13,500 last year for CARI, children’s ark and neo-natal unit, which is very close to Lisa and Wayne’s hearts.

“That was really nice. The quads were in neo for six weeks. I’m mad about all the girls in there – the care we were given was exceptional.

“I will never forget that - they gave the lads the best start possible,” said Lisa.

Eight months on Max, Alex, Ashley and Kayla are “healthy and happy”.

As there are spare seats free in the Montana, Gerry O’Brien, sales executive, Limerick Motor Centre, joked there were “two seats free for twins!”

However, Lisa is adamant they are reserved for adults to help them when they are out and about!

Gerry has been selling Hyundais for 17 years and this was his first experience of dealing with the parents of quads.

“They are absolutely exceptional kids - they were smiling and there wasn’t a tear to be found in any of them. We wish them all many happy years of motoring,” said Gerry.

As Lisa and Wayne have a lot of added expense he said he “did his very best” on price.

“The car comes with three of Hyundai’s five year unlimited mileage warranty left. Cars are expensive to maintain so they have three years of peace of mind motoring,” said Gerry, who added that the over €13,000 was raised from their Hot Wheels and High Heels fashion show. Meanwhile, Limerick Motor Centre is sponsoring the Ballyneety Mid Summers Ball in the golf club on June 3.