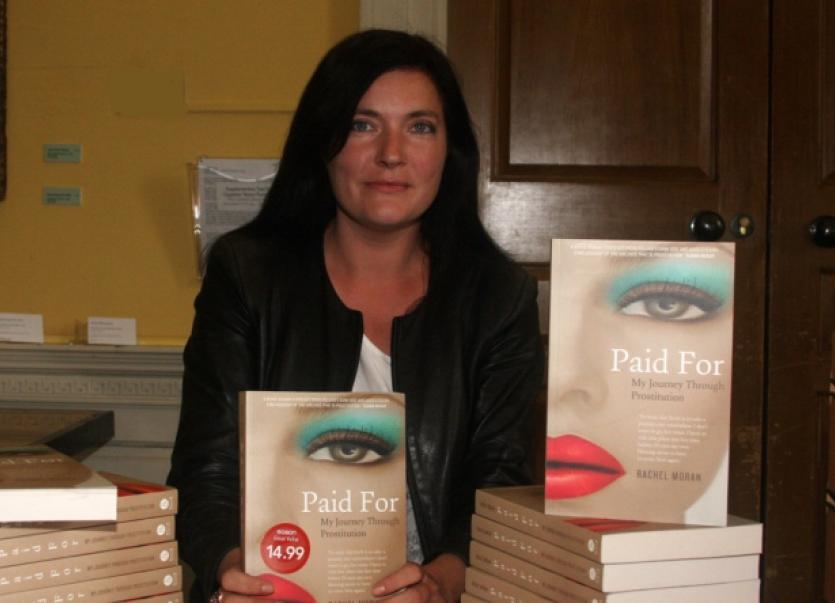 A FORMER prostitute who had “hundreds and hundreds” of clients while working in Limerick city says “the vilest punter in Ireland” is a county Limerick farmer.

A FORMER prostitute who had “hundreds and hundreds” of clients while working in Limerick city says “the vilest punter in Ireland” is a county Limerick farmer.

Rachel Moran who is originally from Dublin was based in the city centre in the 1990s, during which time, she says, she earned “tens of thousands” of pounds.

The 37-year-old said she worked in brothels in six apartments at city locations - including Cruises Street, the Dock Road and the Ennis Road - where she performed sex and sexual acts for clients from both the city and the county.

The farmer from Limerick who was nicknamed Jim Wrong, she explained, “became quite famous in his own right” but only among the women in prostitution.

“He would have been in his late ‘50s when I saw him and he is still doing the rounds,” explained Ms Moran who now works as a journalist and author.

During the 1990s, Ms Moran worked in Limerick for periods of time ranging from four to six months on two to three occasions. She also travelled up and down from Dublin to work for shorter stints – “a week or two here or there”.

The farmer, she said, became so notorious that a blog post was penned about him by the prostitutes.

“We called it Jim Wrong. I wrote it in conjunction with two other women. We changed his surname. He got his name because he was notorious for being the vilest punter in Ireland and when I’m talking filth, you haven’t seen filth until you have seen this man.

“It was indescribable filth at every possible level you can imagine.

“It was more to do with his physicality – he was dirty in every shower in his house. You would smell him before you would see him.”

Reflecting on her time working in the city, Ms Moran said she didn’t find the men of Limerick to be any worse than the men of anywhere else “because they were all lousy, no matter where you went.”

“I would have spent more time in Limerick than anywhere else, other than Dublin of course,” she explained.

“You would rent an apartment and run it as a brothel for whatever length of time until you got rumbled by the guards or the landlord or things turned violent. If the wives of Limerick knew what is going on - it’s an eye opener,” she said.

Her clients were charged a flat rate of £150 an hour no matter what service she provided.

In general, the men who bought sex from her, she explained, avoided talking about their profession but were “overwhelmingly middle-class men” many of them married.

While the majority of her clients called to the apartments in the city, she also, “on a few occasions” travelled to homes in the city and county to tend to clients as part of “call-outs”. “When you do call-outs, you usually find yourself in opulent homes, well-to-do, middle-class homes.”

Ms Moran who appeared on last week’s RTE Prime Time programme is a prominent advocate of the Nordic model for tackling the prostitution industry by targeting demand through legislation.

Ms Moran was speaking at the regional launch of her new book, Paid For: My Journey Through Prostitution, which was hosted by Doras Luimni