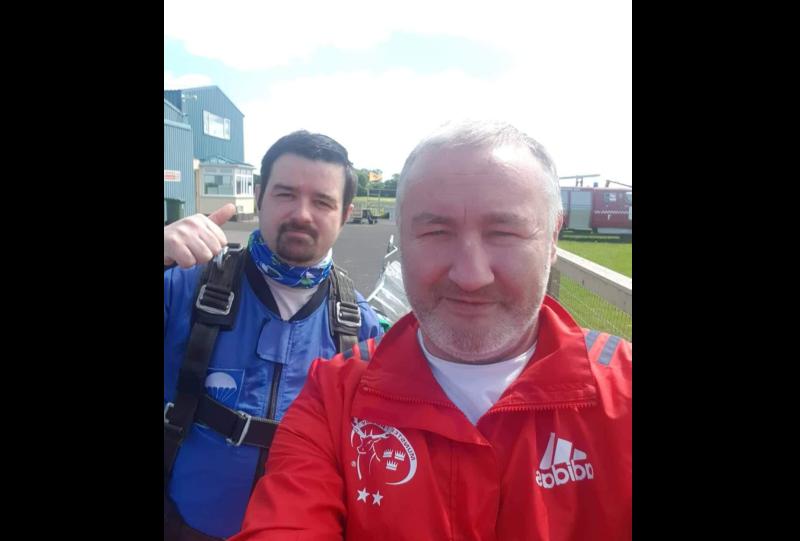 TWO LIMERICK men are helping the homeless having completed a charity skydive which has raised much needed funds for local on the ground services.

Ian Gleeson, from Hyde Road, Prospect in Limerick completed a parachute jump on Friday, May 27, in aid of Help The Homeless Limerick (HTHL), raising a total of €910 in the process.

“He absolutely loved the jump and will remember it forever,” Mike Daly, who organised the fundraising drive and logistics for the jump told Limerick Live.

Mr Gleeson jumped from the Irish Parachute Club in Clonbullogue in Offaly, successfully completing a freefall tandem parachute jump from an altitude of 13,000 feet.

Out of the total proceeds raised from the event, €650 has been donated to Help the Homeless Limerick, with the remainder covering the cost of the jump.

Mike stressed that the money will go a long way in supporting those living on the streets, providing hot dinners and deserts every night, hygiene essentials, shoes, trainers and little sleep pods.

He praised the work of Limerick women Jackie Duhig and Anne Marie Sheehan, who helped set up the group in aid of those living on the streets.

“They go above and beyond for those forgotten by the state, they are out there seven days a week including Christmas day feeding those on the streets.

“They have built up quite a rapport with those living rough and they are loved by those that they help,” he remarked.

Jackie Duhig spoke to the benevolence and courage of both Ian and Mike in raising vital funding for the volunteer service.

“On behalf of HTHL, thank you both and all who participate. We are extremely grateful,” she said.