Cause of plane fire at Shannon Airport 'not identified' by investigators 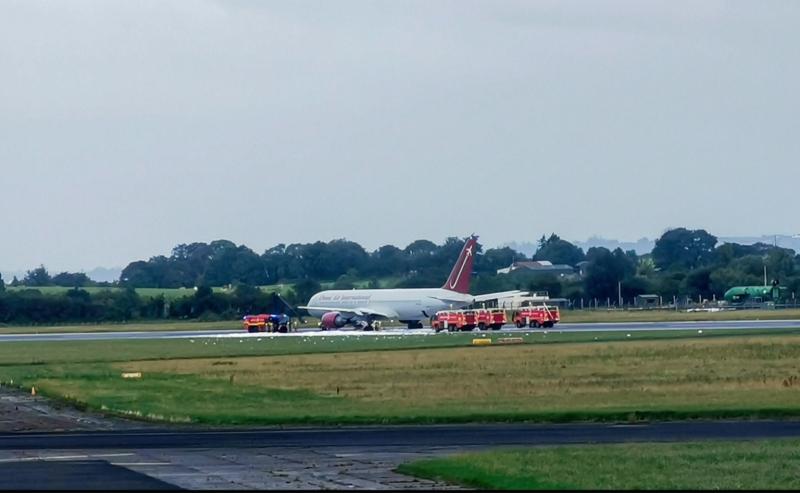 THE cause of a fire which led to the emergency evacuation of more than 150 people from a plane transporting US troops at Shannon Airport could not be identified by investigators.

One person sustained minor injuries during the incident which happened shortly after 5am on August 15, 2019. A report, into what happened has just been published by the Air Accident Investigation Unit at the Department of Transport.

The Omni Air International Boeing 767-300 was about to depart Shannon when the crew decided to return to the terminal building having aborted their take-off because of an issue in the cockpit.

According to the report, smoke was observed coming from the plane's landing gear as it was being taxied along the runway. The airport's fire service was deployed and the jet was immediately evacuated.

"The fire was rapidly extinguished by the Airport Fire and Rescue Service and passengers and crew were evacuated. Subsequent examination of the wheels, brakes and flight recorder data found no identifiable cause of the fire," stated a summary of the investigator's findings.

"It is therefore probable, that the combination of a rejected take-off at high speed, combined with a lengthy period of
taxiing where brakes, particularly on the left side were used, caused the brake system to overheat and a fire to ignite in the left main gear bogie," it added.

According to the 23-page report, the Flight Crew "became aware of a loud and increasing noise" during the take-off roll around half-an-hour earlier.

"The Co-Pilot suggested the noise may be coming from a cockpit window and was heard commenting ‘Window ok’ on one channel of the CVR recording. However, the Commander did not appear to hear the Co-Pilot and was unaware of the source of the noise," states the report.

As part of the investigation, the landing gear and wheels were thoroughly examined.

"An examination of the main landing gear bogie, wheels, brakes and hydraulic lines carried out by the respective manufacturers and witnessed by the FAA, found that there was no identifiable source of the fire. The examination found that all of the brakes on the left main gear were found to be within acceptable limits. Analysis of the flight recorder data by the
Aircraft Manufacturer showed that the brakes functioned as expected for the weight and speed of the aircraft at the time of the occurrence and there was no evidence of brake ‘dragging’.

The report from the AAIU does not make any specific safety recommendations.

Passenger taken to hospital after flight diverts to Shannon Airport