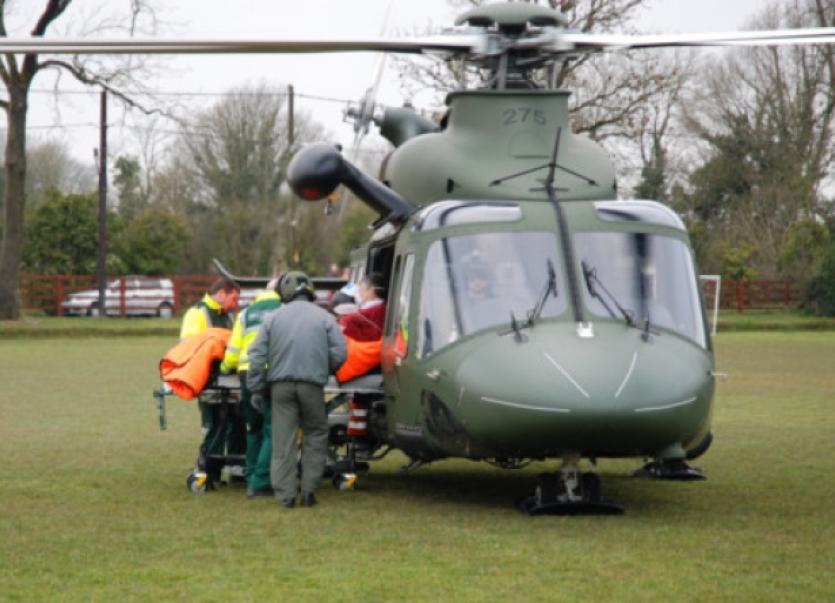 A DEDICATED air ambulance has “undoubtedly saved lives” that might otherwise have been lost since the HSE reached agreement with the Air Corps on providing the service 10 months ago, according to the medical director of the National Ambulance Service.

A DEDICATED air ambulance has “undoubtedly saved lives” that might otherwise have been lost since the HSE reached agreement with the Air Corps on providing the service 10 months ago, according to the medical director of the National Ambulance Service.

Dr Cathal O’Donnell said he was hopeful that the Minister for Health James Reilly would approve the continuation of a one-year pilot programme that has seen the Air Corps helicopter handle 200 emergencies to date.

The Emergency Aeromedical Service responded to a medical emergency in Cappamore on Easter Sunday, landing on the local soccer pitch before airlifting a suspected heart attack victim to hospital.

Helicopter Emergency Medical Services (HEMS) is one of the main themes of a day-long conference aimed at medical professionals set to take place at Limerick Racecourse on April 27.

Dr O’Donnell is co-chair of the Resus 2013 conference and will speak, along with the Air Corps’ Lt Col Sean Clancy, on the establishment of the pilot programme.

“We have a good session planned with international experts who are medical directors of air ambulances from around the world who are coming in,” said Dr O’Donnell.

The Air Corps helicopter, Dr O’Donnell said, was “a dedicated resource that we task for the 10 hours a day it is flying”.

“We can send it out in the same way we can an ambulance on the road. It is based in Athlone and covers the whole country but is mainly working in the west where we have some of the main issues around access and distance. We do a fair bit in North Tipperary, in Clare, in west Limerick, Galway and Mayo and it’s a daylight operation 10 hours a day.”

The service had “moved beyond” an early mishap when the pilot was forced into a hard landing after hitting overhead wires near Borrisoleigh in County Tipperary last June, Dr O’Donnell said.

But that incident underlined the risks to crew and why the service has to operate in good light.

“This week we will have hit our 200th completed mission and it has been particularly busy over the last couple of months as daylight has lengthened and weather has improved. Undoubtedly it has saved lives and off the top of my head I can think of three or four patients who would be have been dead without it - no question,” said Dr O’Donnell, who previously worked at an emergency consultant at the Mid-Western Regional Hospital.

Dr O’Donnell is one of a voluntary group who have been putting on the conference in the Limerick area every year since 2005. Supported by the HSE, the medical school at UL and the Pre-Hospital Emergency Care Council, the event is aimed at paramedics, nurses, GPs, voluntary ambulance crews, hospital consultants, military medical corps and others and attracts around 300 people a year.

Martin Flaherty, formerly deputy CEO of London Ambulance Service will speak on how ambulance services were delivered during the London 2012 Olympic Games. Other sessions are to include developing international guidelines on resuscitation and the delivery of emergency care at large events such as music festivals and in the wilderness.