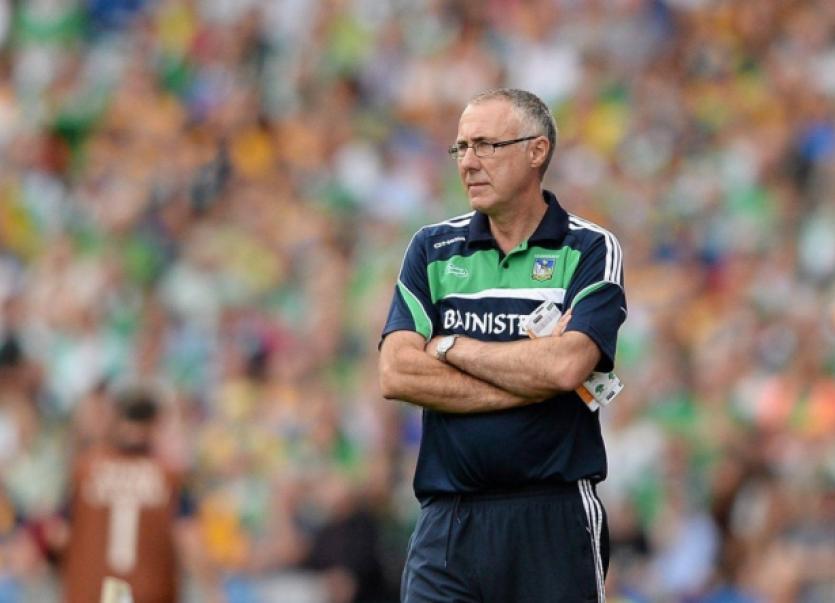 John Allen will always be remembered for bringing Limerick to a first Munster SHC since 1996. Jerome O’Connell traces back over his two year stay in Limerick in the words of Allen himself.

John Allen will always be remembered for bringing Limerick to a first Munster SHC since 1996. Jerome O’Connell traces back over his two year stay in Limerick in the words of Allen himself.

“I have watched Limerick all my life and is amazes me that they are yet to equal ‘73 and that the ultimate goal. I am looking forward to working with all the young talent and these are young fellas that carry no baggage and have won underage and at college level.”

On his appointment as Limerick senior hurling manager - October 2011

“It doesn’t happen overnight. Teams can gel together very quickly and there are a lot of good signs that everything is moving in the right direction. Teams have come along and been successful very quickly. I think that Limerick can be as good as what is out there on any given day.”

“We were terrible - there is no point saying otherwise. It was all one way traffic in the second half - we were beaten in so many places.”

“Obviously it was very disappointing to lose the way we did the other night. We got eight points up but Clare kept coming at us and it is disappointing to lose like that. I think we have come on massively since the first game against Clare and we now just have to get on with it and start building towards the championship.”

League final defeat to Clare in the Gaelic Grounds - April 2012

“I recognise that Ciaran is an icon in Limerick hurling and that he is very committed to Limerick hurling and always has been and I respect his wishes that if he can’t give 100% that he is better off not part of the management team. I am not going to get into any controversy so I am not going to say anymore. I am taking at face value that he doesn’t have the time to give. There has been no drama - no dressing room dust-up as far as I am concerned.

“It was a heroic performance really – the difference probably was that Tipp had some very very experienced players on their subs bench and obviously had a point to prove and they made a huge difference when they were brought on and that turned the game I think. It’s a results game and I am disappointed we lost but I am happy with our play. We have to be realistic – there are a lot of young fellas and we are talking about playing a team that were in the last three All-Ireland finals. You are trying to match that but you need 20-25 players of that level and we are building towards that and that’s the ultimate aim. It’s going to take a while and I am sure Limerick people are fed up hearing that, but that’s the truth of it really.”

“I am absolutely delighted for everybody - it was a hugely important win for us and it was vitally important that we did win and we played well. The second half we were heroic – I used the word against Tipp but again today there were fellas all over the field that worked like Trojans and that’s what it came down to - we wanted it a bit more maybe.”

“In the 15-minutes after half-time the game was won and lost, unfortunately we lost it. I can’t have too many complaints, the better team did win over the hour and I’m sure Kilkenny’s stats were better than our stats over the hour. Maybe one or two of their goals were misfortunate but the team who gets the most goals usually win - all in all the better team won and that’s the bottom line.”

“I would always have known Brian from a distance with my cork hat on but last year I got to know what an honest, decent, hard-working individual he was and he was an absolute pleasure to work with. Centre back is a key position on any team and the fact that he played there for so long with Limerick shows how highly he was thought of by so many different managers. He didn’t take any prisoners as a player, he was a great reader of a game and he always tried to do the right thing with the ball.”

“Our forwards as a unit didn’t work half hard enough today. When you’re allowing backs to come and pick out colleagues with a pass, that’s not good enough. Our forwards need to work much harder – that’s something we’re very aware of for the past year and a half.”

“I’ve said all the time that we’re preparing well all the time but we just weren’t bringing it to the pitch. But then we did start to play well. I thought we played quite well today. We did concede three goals but we did play quite well. The conditions were hard. We’re in the final and that’s where we wanted to be. Finals are for winning and that’s next now.”

“It’s very important - you don’t underestimate how valuable it is to be playing against the better teams. Limerick have shown over the last three years that they are as good as all other teams but it’s unfortunate the way the league is structured. The way that the league is structured is all wrong - there should be a bigger league with more teams. We are just marginalising teams.”

Ahead of a third successive league final appearance - April 2013

“You are seeing fellas at training and trying to pick a team in the best way you think possible - trying to get the best inform players in the first 15. Sometimes then we mightened play every player in their best position. I can’t fault the players.”

“I have the utmost belief in the players and the utmost trust, they have huge qualities. I know what they put in and I wanted to make it clear that this group of players are putting in a huge amount of time - they put their lives on hold to play inter-county hurling and I am very proud of them.

“Bluffing is not an option for anyone and we are all honest enough with each other to know that at this stage. The players know at this stage that if they don’t tow the line or if they are not on form that they won’t be in the team.”

“Being brutally honest the first day that I put on a Limerick shirt, I found it extremely strange. Now it’s not an issue and second nature.”

“The last day Clare used a sweeper and Galway never got to grips with that - Galway had an extra man at half back and yet Podge Collins was dictating play and they had a back lose. There will be a lot of tactics in this game.”

“I know some of the people were saying to me– there is a lot in the papers, there is a lot on the radio. I wasn’t aware of it because I don’t live in Limerick. I didn’t see any evidence of it in the dressing room. I didn’t see any evidence of arrogance or fellas who didn’t prepare themselves mentally like they did for the last game. That wasn’t evident. I don’t think it was an issue – but I don’t know deﬁnitively either.”

“This has been a very difficult decision to make but I think it’s the correct one for the team. A new impetus and a new drive will surely follow under a new manager. It’s a door shut for me but it’s a door opening for somebody else. I have been very fortunate to work with such committed people who gave so much for the betterment of the Limerick hurlers.”