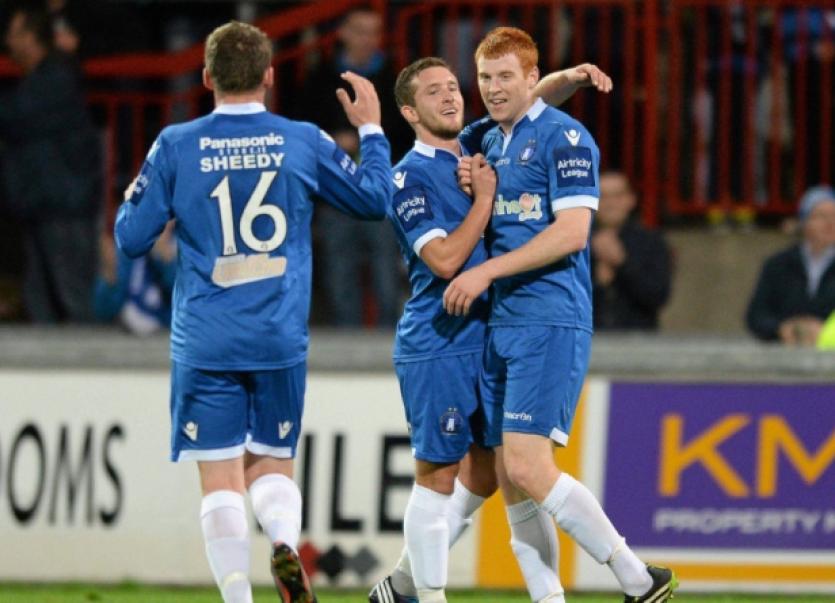 RESOLUTE Limerick FC stepped up their pursuit of sixth-placed Cork City in the Premier Division table, thanks to a hard-earned 1-0 victory over relegation-threatened Shelbourne at Thomond Park this Wednesday night.

RESOLUTE Limerick FC stepped up their pursuit of sixth-placed Cork City in the Premier Division table, thanks to a hard-earned 1-0 victory over relegation-threatened Shelbourne at Thomond Park this Wednesday night.

Stuart Taylor’s home side rode their luck on a number of occasions in the second half as a combination of poor finishing and excellent goalkeeping from Barry Ryan prevented the visitors from securing at least a draw.

The victory was Limerick’s fourth win in five in the top flight and helps the Shannonsiders close within one point of Cork City, who have a game in hand. Lims’ final Premier Division game of the season is against Derry City at the Brandywell on Friday, October 25.

Limerick FC’s line-up included 17-year-old centre-half Tony Whitehead, who won the Man of the Match accolade on only his second appearance for the Blues senior side. And Whitehead was joined in the Blues youthful line-up by another 17-year-old, Colm Murphy.

Shels went into the game having lost seven of their last eight fixtures and looking for their first league win since a 2-1 victory at UCD in late July.

After an entertaining opening quarter, Rory Gaffney fired Limerick ahead after 26 mins when he latched onto Carel Tiofack’s in-swinging corner to smash the ball home. It was Gaffney’s ninth goal of the season.

Shelbourne came close to grabbing an equaliser in the 40th minute when home ‘keeper Barry Ryan did superbly to keep out Dean Kelly’s fiercely hit effort.

The visitors also created another fine chance two minutes before half-time when Stephen Sheerin slid the ball wide from a terrific cross from Derek Doyle.

Limerick managed to maintain their 1-0 lead to half-time, but that slim advantage was under threat once again seven minutes after the restart only for captain Kelly to slide the ball wide from close range, following Derek Doyle’s pin-point cross.

Shels’ continued to create the better openings as the third quarter wore on, much to the delight of their vocal supporters, perched high in the West Stand.

Lims’ Player of the Year Ryan did superbly to push a well-struck effort from the marauding Adam Hanlan over the crossbar in the 64th minute.

Shaun Kelly did manage to create a rare opening for the home side in the 67th minute, but his powerful drive was helped over the crossbar by Shels’ ‘keeper, Lee Murphy.

However, Shels continued to dominate possession against a youthful Limerick side, but there sense of frustration grew more obvious as the half wore on with the visitors failing to convert any of the decent chances they had created.