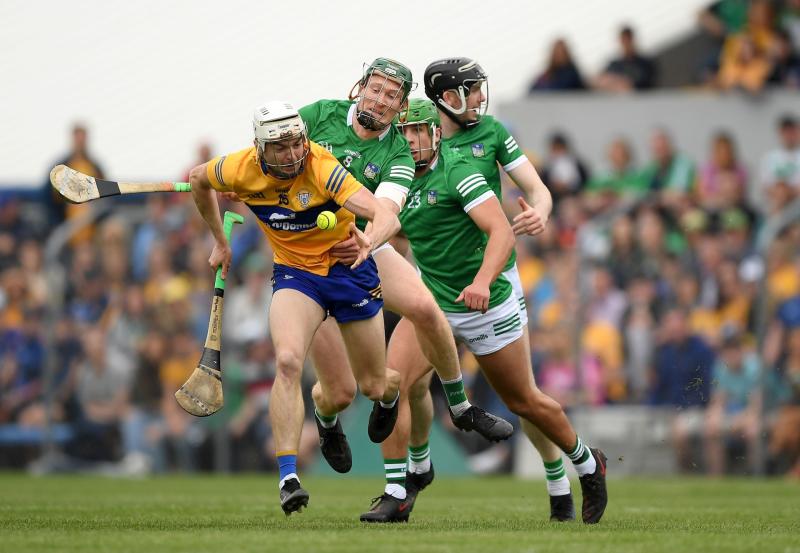 In Cusack Park in Ennis it finished Limerick 1-21 Clare 0-24  - just the second ever championship draw between the counties and the first since 1970.

The result confirms that the Shannonside neighbours will meet again in the Munster SHC final on June 5 at 4pm - most likely in Thurles.

In this drawn tie, Limerick had 10 wides - one more than Clare - in a game in which the sides were level on 14 occasions.

Limerick lined out without Cian Lynch, Aaron Gillane and Cathal O'Neill, among others.

In the end it was a Diarmaid Byrnes injury time free that sealed the draw in a game in which Limerick had Gearoid Hegarty sent-off in the 62nd minute.

The sides were level on seven occasions in the opening half and went to the interval dressing room - Limerick 1-12, Clare 0-15.

The attendance of 18,129 made for a raucous atmosphere and the players didn't disappoint with a pulsating opening half that returned 28 scores and seven wides - Limerick had four wides.

Clare had the aid of the breeze in a half in which three points was the biggest gap between the teams.

Limerick hit the ground running with Diarmaid Byrnes and Seamus Flanagan on the mark.

When Gearoid Hegarty got on the scoresheet the lead was 0-5 to 0-3 to the men in green and 11-minutes played.

But Tony Kelly was now up and running and would have four points from play by half time to supplement his free-taking.

Then came the Limerick goal - Conor Boylan won a high ball and carried goalwards until he laid off to Kyle Hayes who made no mistake from close range.

But the goal was only an interlude to seven Clare scores and after the green flag, Kelly, David Fitzgerald and Diarmuid Ryan points regained the advantage for the home side; 0-10 to 1-5 and now 21-minutes played.

Diarmuid Byrnes had six points by half time the only score from play again tied up proceedings before three Kelly frees pushed Brian Lohan's side clear once again.

From here to half time, Limerick outscored Clare 5-2.

Wing forwards Hegarty and Morrissey were on the mark and then a Reidy free looked to have sent Limerick into half time ahead until Kelly's 12th score levelled for the seventh time in the dying seconds of the two minutes of injury time.

There was no let-up in the second half.

Hegarty and Reidy (free) edged Limerick ahead but then came a trio of points to open a Clare lead.

Hegarty's fourth point and frees from Reidy and Byrnes reclaimed the lead for the men in green.

The sides continued to swap scores and then in the 62nd minute came the second yellow card for Gearoid Hegarty who was sent-off.

Darragh O'Donovan pushed Limerick ahead but Shane Meehan and Ryan Taylor then looked to have won it for Clare.

In injury time it fell to Diarmaid Byrnes to score his seventh pointed free to ensure a draw again.