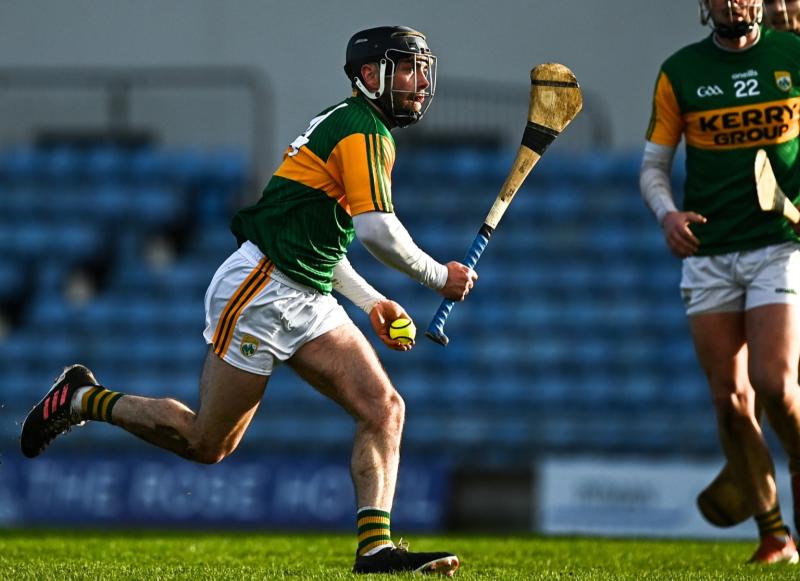 THREE Limerick natives will be part of the Kerry senior panel for the 2022 season.

All three were on the panel last weekend when the Kingdom defeated Tipperary in the Munster Hurling Cup.

That win advanced Kerry to play Limerick this Sunday in the semi final of the early season provincial competition.

Kerry are under new management this season - former Waterford hurler Stephen Molumphy is the new manager.

Before Christmas a the Kerry County Board were successful in receiving a special derogation from Central Council in Croke Park to allow them the same privilege as the Carlow, Laois and Westmeath hurlers to draft players into their squad under the parentage or granny rule and thus the inclusion of the Limerick trio in their panel.

Killeedy's Ahern started full forward against Tipperary and scored three points from play. Ahern won an All-Ireland U21 medal with Limerick in 2017 in a team that included Sean Finn, Kyle Hayes, Aaron Gillane and Cian Lynch among other members of the current Limerick senior hurling panel.

Ahern was also in the county U21 panel in 2018 and three years previous was in the Limerick minor hurling panel that contested the Munster MHC final.

Paudie Ahern, who qualifies through his Kerry born mother Shelia (nee Twomey), could be joined in green and gold by his older brother Jack but he is out injured at present.

Also in the starting team for Kerry against Tipperary was goalkeeper Louis Dee, who qualifies through his Kerry born father Gerard.

The Mungret man is currently a member of the TUS MidWest Fitzgibbon Cup panel and was in goals for the Moylish based side in the 2019 All-Ireland Freshers Final.

In 2020 he was on the Limerick U20 hurling panel alongside current Limerick seniors; Colin Coughlan, Cathal O'Neill and Jason Gillane.

Three years previous was in goals for the county U17 side after progressing up through the Underage Hurling Academy.

The third Limerick man in the Kerry ranks is also from Mungret - Niall Mulcahy, who qualifies for The Kingdom via his mother Eileen (nee O’Connor).

The forward was among the subs in their opening round Munster Hurling Cup tie. Back in 2014 Mulcahy was a sub on an Ardscoil Ris Harty Cup winning side that included Cian Lynch and Aaron Gillane.

Mulcahy has been one of the stars of the Limerick Premier IHC for the last two years. He scored a hat-trick of goals for Mungret in their opening round win over Murroe-Boher this season and then two goals in the county final win over Cappamore.