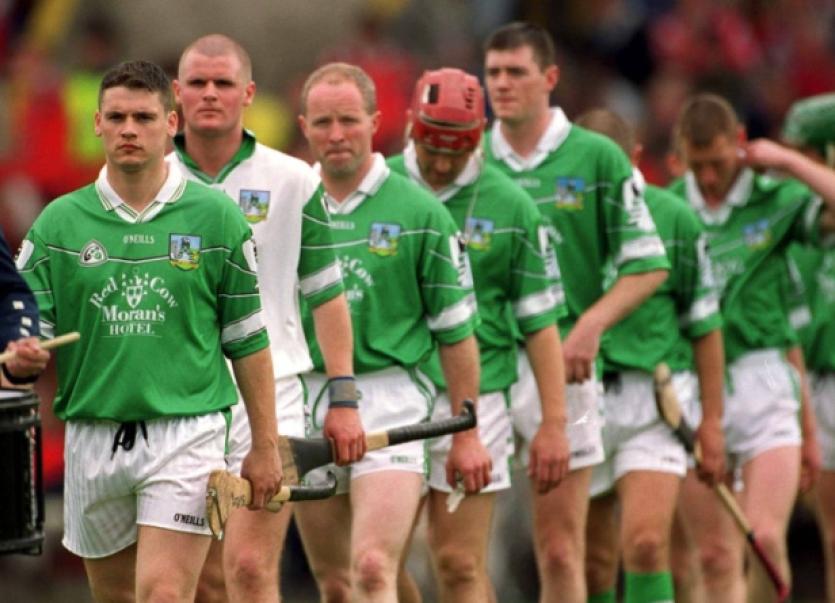 ONE of the “all time great games” is how the Limerick Leader described Limerick’s victory over Cork in 2001.

ONE of the “all time great games” is how the Limerick Leader described Limerick’s victory over Cork in 2001.

That was the last time Limerick beat Cork in Pairc Ui Chaoimh in the first round of the 2001 Munster championship.

Limerick came into the game on the back of a couple of disappointing seasons. The 1-16 to 1-15 win that day, though, was the start of an eventful campaign. Waterford were beaten the next day out to get Limerick into a Munster final but Tipp proved too strong back in Cork again and then Wexford beat Limerick by a point in the All Ireland quarter-final in Croke Park.

“We were written off by most people coming into the game”, Moran recalls. “We were hammered by Clare in the league so most people didn’t give us a chance.”

The game, despite being a Munster quarter-final, was played before an attendance of 42,000 - an interesting footnote considering all the controversy about the capacity for this year’s decider.

“The atmosphere was electric,” Moran added, “In the first half we produced our best hurling for five or six years.”

He also spoke of the sense of relief at the final whistle.

“We were hanging on”, Moran said. “Cork rallied, but they were always going to do that. We couldn’t retain the ball.”

Despite Cork’s best efforts Limerick were able to hold on to a one-point victory.

A Barry Foley point direct from a sideline cut secured an historic victory for Limerick. That was the Patrickswell mans fourth point in an impressive display.

His club-mate Paul O’Grady made his championship debut in this game. O’Grady was on the frees and contributed five points to Limerick’s total.

“It was a great day”, recalls O’Grady. “Going down on the bus, I didn’t know what to expect.

“There was a lot of senior lads, including my club-mate Ciaran Carey who helped me,” he said, revealing how some of the senior players on the panel helped ease the debut nerves.

The Patrickswell man added that he felt no extra pressure with the responsibility of free taking duties.

“I didn’t pay too much attention to it. I took them for the club all the time.”

O’Grady admitted that Limerick “quietly expected” to beat Cork that day despite their poor league campaign in the build up to the championship.

Also on that team was tough tackling defender Stephen McDonogh. The Bruree man is a part of Brian Ryan’s back room team for the minors and has fond memories of 2001.

“The first thing is that we went into that game as huge underdogs,” McDonogh said, also making reference to the league defeat.

“Cork were favourites but we prepared very well, Eamonn (Cregan, manager) had us really, really well prepared. Going down there we were quietly confident in our own ability,” he added.

McDonogh also revealed that he was unable to take in the brilliance of Barry Foley’s winning score at the time.

“As a player, when something like that happens, you don’t think about it. You have to keep the head down and worry about the next ball.”

However 2001 was a year that ultimately ended in disappointment as Limerick lost the Munster final to eventually All-Ireland champions Tipperary by two points before losing to Wexford in Croke Park by just one point in the All-Ireland quarter-final.

McDonogh believes 2001 was a missed opportunity.

“We were beaten by a couple of points in the Munster final (against Tipperary) on a really hot day in Pairc Ui Chaoimh. And I would say that in all my time with Limerick, 2001 was certainly a missed opportunity. We certainly had the team to possibly win an All-Ireland.”

Despite this regret, the minor hurling selector insisted that this was not the catalyst for the barren run Limerick endured in Munster – failing to win from 2002 until 2007 when they beat Tipperary in a second replay in the Gaelic Grounds.

“When you’re beaten in a year you move on, you can’t let that drift into your mind. I don’t think it did (have an effect)”.

Tipperary went on to win the All-Ireland in September 2001, defeating Galway by three points in Croke Park.

Limerick have been through the full range of emotions since that May day 13 years ago but they haven’t beaten Cork in Pairc Ui Chaoimh since.

They can change that on Sunday.