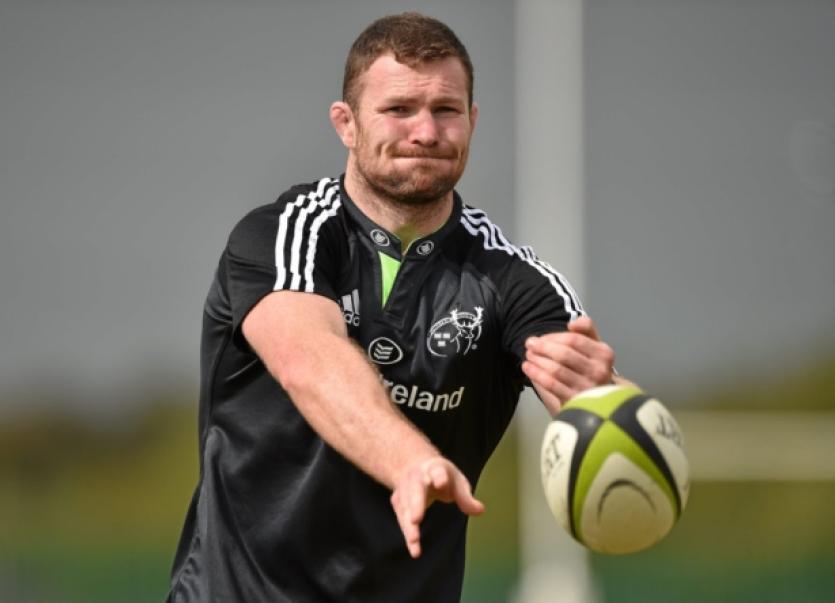 MUNSTER head coach, Anthony Foley has described the toe injury which is set to keep Donnacha Ryan out of action for the next four to six months as ‘a bitter pill to swallow.’

MUNSTER head coach, Anthony Foley has described the toe injury which is set to keep Donnacha Ryan out of action for the next four to six months as ‘a bitter pill to swallow.’

Thirty year-old Ryan, who played just 10 times for Munster last season after being troubled with a knee injury, injured his right foot in the PRO12 game against Treviso last March.

Following consultation with the specialist in London last week, it has been confirmed that Ryan will now require surgery on his toe.

Speaking at a press briefing at UL yesterday ahead of Munster’s Guinness PRO12 clash with table toppers the Ospreys at Thomond Park on Saturday, 6.30pm, Munster head coach, Anthony Foley said: “We took an approach with Donnacha (Ryan) to try and get the foot right. He was out there training today full on, everything, the only thing he cannot do is scrummage. That is the most frustrating part. You look at him in the opposition to us today and he is going at our line-out, going full-on. The foot cannot withstand any scrummaging. We have done everything in our power, but unfortunately it is going to be surgery now for Donners.

“It is a bitter pill to swallow. But we will get on with it. It’s a good opportunity for Dave (Foley), Billy (Holland), Donncha (O’Callaghan), Sean McCarthy, John Madigan and these lads coming through. I think we have enough in place to deal with it.

“The ambition is to have him (Donnacha) back before the end of the season. We wish him the best with the operation and wish him a speedy recovery. Hopefully, he will be back in four rather than six months.”

Munster have been hit with another blow with confirmation that Keith Earls has met with a setback as he was working his way back from a knee injury.

“We were looking at Keith (Earls) for next week to have had him training fully with us this week. But last week he took the same knock on the knee he took side stepping,” Foley said.

“We just can’t take the pain through it. He was above at Irish camp during the week and the view is to bring him for more tests. He is going to one of the leading consultants on it, a Swedish guy who operates out of London. Hopefully, we will get good news out of that.”

Saturday evening’s game at Thomond Park is live on Sky Sports 2 from 6pm.