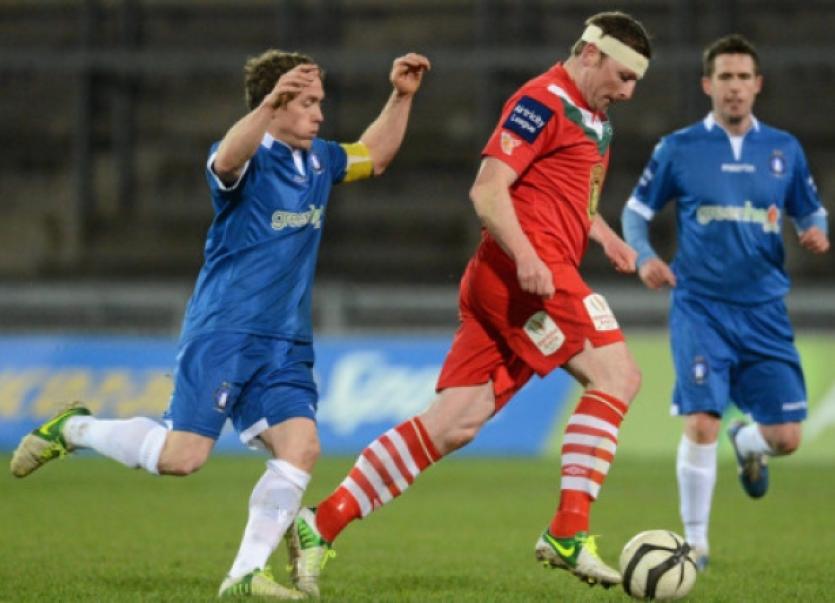 LIMERICK FCs stand-in captain, Joe Gamble is hoping the side can ‘kick on’ from their impressive start to life in the top tier of League of Ireland football.

LIMERICK FCs stand-in captain, Joe Gamble is hoping the side can ‘kick on’ from their impressive start to life in the top tier of League of Ireland football.

Former Cork City star Gamble skippered Limerick against his old club on their return to the Premier Division as a result of Pat Purcell’s suspension.

Two-time Irish senior international Gamble was hugely encouraged by the side’s display against in-form City on their return to the top Division.

Midfielder Gamble said: “I am really happy. I had a great time at Cork City. I had the most successful time of my career there, but that is in the past now.

“I am delighted to have captained Limerick tonight in the absence of Paddy Purcell. My kids and my wife were here to watch me play, so I am really proud.

“Considering the team we have had, the new manager coming in, the new philosophy we have, the fantastic facilities we have at Thomond Park, we could not have asked any more.

“We knew Cork were going to be flying. They have played four competitive games already. They have been free-scoring. To limit them to a free sheet, we can be really happy today, our first day in the Premier Division.

“Hopefully, there is more to come. I am absolutely delighted with it. I know everyone else is. Hopefully, we can kick on from here and build on the platform.

“Tonight is why I joined Limerick last season (from Hartlepool United). I didn’t come to pick up a wage packet. I spoke with Pat O’Sullivan and the previous manager here and the whole philosophy of the club was geared towards getting promoted.

“Reading the blog and articles on internet forums prior to the start of this season, people were saying we would finish seventh or eighth. We don’t care what people outside think. We have a great work ethic. This was the toughest pre-season I have had in a long time.”