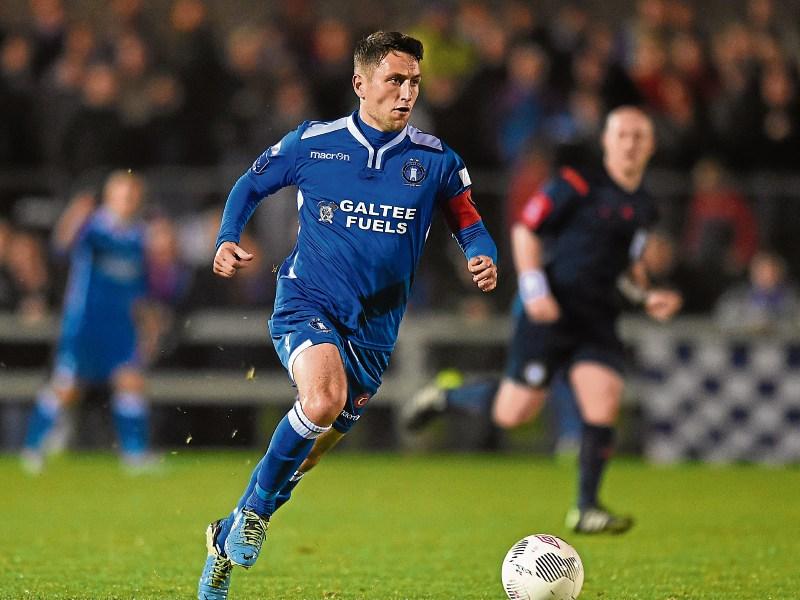 Andrew Cunneen, in the Brandywell

LIMERICK FC QUALIFIED for their first major cup final in 14 years thanks to a sensational victory in the Brandywell on Monday night.
Stephen Kenny's 15th minute strike was enough to see the Blues over the line - despite Derry's heavy onslaught.
Limerick surprised their Premier Division opponents in the early stages as Martin Russell's men flew out of the gate.
Chris Mulhall had a huge chance as early as the fifth minute when Greene played the target man through on goal - but Ger Doherty was equal to the effort - collecting it at the second attempt.
The early pressure did pay off however - a cross from the left caught Derry's backline by surprise. Dean Jarvis tucked into a central position while Stephen Kenny maintained his width. When neither Barry or Jervis cleared the initial cross, the ball fell kindly to Kenny at the back post, and he slotted home from all of four yards much to the delight of the large travelling support.
In a half of two halves, Derry seized the game in the last twenty minutes - creating numerous half chances, but never quite unlocking the combination of Williams and O'Connor.
Their best opportunity arrived five minutes before the whistle - Barry McNamee's cross from the left was headed just over by Lukas Schubert.
Limerick sat in for much of the second half, but constantly found openings on the break - usually with Greene running off Mulhall. Duggan's effort after 55 minutes was well palmed away by Doherty, with the City stopper always getting to Mulhall's rebound.
Derry created a glorious chance for their talisman on the hour mark. Joshua Daniels' cross from the right found Patterson unmarked. He swung his boot but Hall acrobatically tipped around the post to keep Limerick ahead.
The final 20 minutes saw the Blues put in a defensive performance for the ages - denying Derry space on the ball - with even more chances coming from counter attacks.
In the end, the Blues held on to record an historic victory in the venue they lifted this trophy in back in 2002.