Light at the end of the tunnel for Limerick Greenway 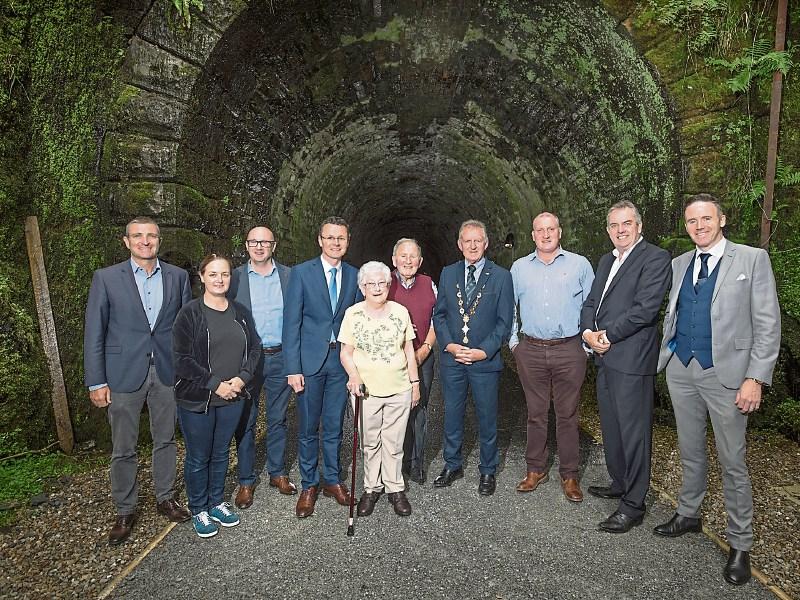 A CRUCIAL step forward has been taken in the ongoing task of upgrading the Great Southern Greenway with the re-opening of the Barnagh Tunnel.

But when the ribbon was cut on the tunnel last Friday, it was a step back in time for Minister of State, Patrick O’Donovan and especially for his cousin, Mary Hartigan whose childhood home was the nearby station house.

Mrs Hartigan was accompanied by Fr Paddy O’Donovan, brother to Minister O’Donovan’s late father, John, both of whom grew up in the railway crossing cottage at Churchtown. Tracing the family’s long connection with the Great Southern and Western Railway, Minister O’Donovan explained that his great-grandfather had come from Carlow to Kerry to work on the railways but, following the loss of his leg in a shunting accident, was given the level-crossing job in Churchtown in the 1880s.. “My grandmother Margaret inherited those gates and cottage and her husband, Stephen O’Donovan also worked for the railway. A grandaunt, Cissie Whelan, married Larry Murphy in Barnagh while my Uncle Mylie worked in Ballingrane.”

The family’s association with the railway was very strong, Minister O’Donovan said and he was “very proud” to be cutting the ribbon at the completion of the Barnagh redevelopment.

“Bringing back the Barnagh Tunnel to its former glory is a massive achievement. The original tunnel was constructed by people who had very limited equipment and tools available to them and to see the workmanship in its current condition is just magnificent,” he said.

“I know that it will be a huge attraction for the Greenway and as someone whose family is deeply rooted in the railway I’m proud to be here with the Mayor Cllr Michael Sheahan to be cutting the ribbon to officially open it and giving it a new life as a visitor attraction and local amenity.”

The project, which involved the building of an under-pass under the N21, re-connects the iconic, stone-cut tunnel to the main walking/cycling trail that is now the Great Southern Greenway. The tunnel is now also connected to the Barnagh viewing and picnic area and the project has added a further 1.3km to the 40km greenway stretching from Rathkeale to the Kerry boundary. But it is also a stand-alone visitor project.

“The opening of the Barnagh Tunnel marks an important stage in the development of the Great Southern Greenway Limerick into a world class amenity for the people of Limerick and further afield,” Mayor of Limerick City and County Michael Sheahan said. “By having this Limerick Greenway open means people of all ages can get that all important exercise hit while viewing some beautiful scenery.”

Gordon Daly, Director of Community Development Services with the council, paid tribute to the work of the former custodians of the greenway for all their hard work through the years.

“The revamped Limerick Greenway is increasingly popular for walking and cycling off road, along the 39km route connecting the towns of Rathkeale, Newcastle West and Abbeyfeale. This route is now augmented by a series of Town Loop routes around these principal towns along the Greenway and now the Barnagh Tunnel,” he said. “Since Limerick City and County Council took over the management of the Great Southern Greenway in 2015, the local authority has embarked on a multi-million euro re-development of the 39km route. The work has included fencing, repairing bridges, installing new crossing points and signage. But the multi-million euro project at Barnagh is the single biggest project to date and was funded through a combination of the Hinterland Fund, the Rural Regeneration and Development Fund and money from Limerick City and County Council.

“We are continuing to commit resources to the Greenway to bring it up to national standard, which will lead to increasing tourism and economic benefits for West Limerick,” Mr Daly said.