Out in the Open: My guide to drink slang (with all due respect to the cocktail set) 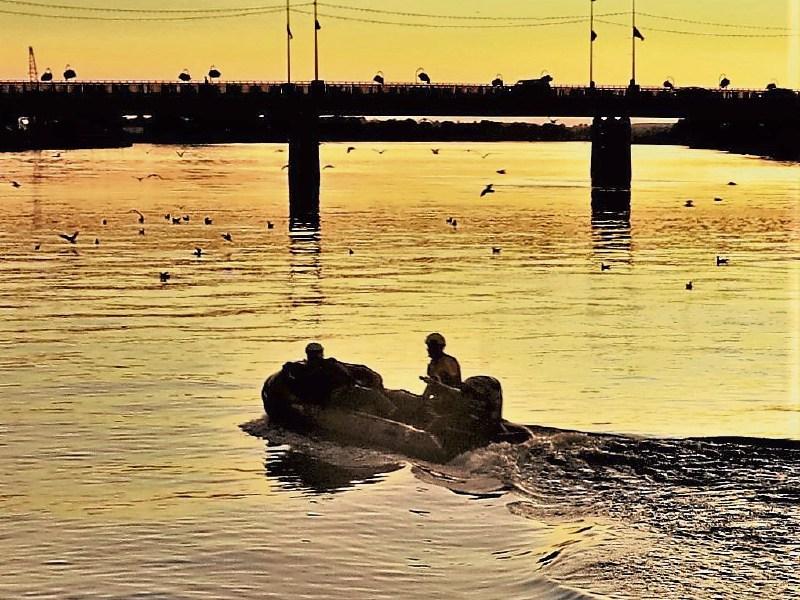 PICTURE THIS: Gone fishing: Claire Waters sent in this shot of the Shannon at sunset

SELDOM indeed will you hear me complain in these columns about pubs, lounges, hotel bars, or any other area licensed to sell intoxicating liquor to those who can afford to pay for it and who have reached the ripe old age of 18.

I do not complain, because I know the problems that arise from day to day in the running of a public house.

Lately, however, I have been sickened to the gills by the needless dirt and general untidiness of many pubs.

There is absolutely no excuse for the state of these establishments, for sloppy tables and counters, for unemptied ashtrays and for floors which are covered with empty potato crisp bags, broken and trampled crisps and countless other odds and ends which no sane paying customer should be expected to tolerate.

Neither should dirty hands or dirty faces be tolerated, or slow service or guff.

Many hoteliers and publicans would seem to believe that anybody whomsoever is qualified to stand behind a bar counter.

This should not be the case for the trade of barman is a delicate one, calling for in-depth knowledge and vast experience.

For instance, a man came into the pub lately, and asked me for a pint of Thunder and Lightning.

I knew by the look of him he thought he had me stumped.

He had another thing coming, however, for I have forgotten the number of times I ordered pints of Thunder and Lightning for Ike the Papers, that is to say, Ike who sells the newspapers outside and around the Ormond Hotel in Dublin and for other older gentlemen who have elegant tastes in matters of drink.

A pint of Thunder and Lightning is no more and no less than a half-pint of stout mixed, at discretion, with a bottle of stout.

A younger, less-travelled barman would, of course, have been in difficulties when asked for a mixture like this, but to an old stager like myself, the request was no novelty.

Thunder and Lightning is rarely called for now, but I am of the belief that we should always be mindful of the past, for it always has a lesson for us.

In Cork, the same drink is known as a System, and they have a habit of saying down there that you can't beat the System.

In other parts of Ireland, the concoction if known as a One in One, and I am sure there are other more colourful soubriquets to be found elsewhere, which brings us to the question of drink slang as distinct from that used for liqueurs and cocktails with all due respect to asses' elbows and American highballs.

These days any young lad can take up his position behind the counter of a pub with little more than a rookie's knowledge at all of the names in intoxicating concoctions with unusual names.

I have seen young boys non-plussed when requested to serve a simple eggnog.

This should not be the case, and the inner circle of the Irish Licensed Vintners' Association should see to it that up-to-date manuals are available in all bars.

Only lately in the Midlands, I asked a barman with a full-grown whiskers for a G&T on the rocks, and he asked me to clarify kindly.

It is amazing how careless we can be about the filling of such onerous positions.

The matter needs immediate looking into, and I wouldn't be surprised if the E.E.C. shortly made a ruling on the position.

I believe there should be a preliminary exam much the same as that set by the Incorporated Law Society before admitting new members to the licensing trade.

There need not be a written examination.

A stiff oral test would do nicely at which a knowledge of Irish might be an advantage.

I say this because I was in Ballyferriter lately in the hotel known as Dun an Oir.

I was asked by a native of that place, "An mbeidh Riser agat?"

I didn't know at the time what a Riser was.

I subsequently discovered that it was the local name for any short drink such as whiskey, gin, or brandy taken before a large potion of between two larger potions.

This is often referred to in Gaeltachts and Brac-Gaeltachts as a lacer, so that we are all brothers under the skin, whether we like it or not.

In other areas, the Riser or Lacer is referred to as the First Coat, that is to say, it is regarded as a sort of undercoating for the heavier painting which is to follow.

Amongst other questions which a candidate might be asked would be following:

A Black and White is, of course, a small Scotch, but in some cases, it could well be a stout and lemonade shandy.

A Black Velvet is a mixture of tout and champagne and is a very popular concoction among successful punters and actresses with sore throats.

A Friesian can be one of the calefactions.

A small Friesian is merely a small Black and White whiskey, whereas a large Friesian is a shandy consisting of porter and white lemonade.

And what of your world-famous Connemara worm-killer?

Why, it is nothing more than a strong shot of unadulterated poitcheen.

It was also guaranteed to dispose of bugs and fleas.

So strong were the fumes emanating from the body's pores that all those infinitesimal creatures sustained by the human body were instantly dehydrated or otherwise overcome.

These are merely elementary questions.

For graduating barmen, there should be a stiffer test.

What, for instance, was Clonakility Wrestler?

For the benefit for the benighted, let me say that the Clonakilty Wrestler is now extinct, but it used to be a very acceptable drink at the end of the last century and for much for the beginning of this.

It was a plain porter manufactured in Clonakility up to about 40 years ago.

It was cheaper than the more popular beverages and reputed to be a great lad for exciting dormant bowels and instituting that malaly so beautifully referred to in poem and ballad as the "trotting disorder."

The passing of the Clonakilty Wrestler was a blow from which parts of West Cork never fully recovered, for acute constipation became vacant there ever after, a fact which is always carefully concealed in that, and in other areas.

And what about your Danno?

There was your man for you.

The older the bottling, the stronger the contents.

Then there were Ponies, Boy Scouts, and Smohawnachs.

A Pony or Boy Scout was a quarter-pint of stout, whereas a Shohawnach was a mere mouthful, a sort of primer.

Then there would be questions for advanced students.

We might order a Castleisland Medium from a smart young buck who thought he knew it all.

Chances are, he would have no idea.

In other words, it was three-quarters of a pint.

An ordinary medium is a mere half-pint.

Then we have that dangerous and highly explosive mixture known as Lunatic Soup.

This consists of several parts of rough cider to one part of common whiskey of plain Red Biddy.

Three pints of this is likely to drive a youthful or inexperienced drinker plain out of his mind, and it should not be tolerated in any decent public house.

There is no witches' potion more damaging to the interior or more likely to leave permanent mental scars or indeed everlasting and incredible hallucinations which make ordinary nightmares seem like extracts from a children's cartoon.

Finally, we might ask from what is Liquid of Banjax, or as it is called in more exclusive watering places, Essence of Everything.

It is the accumulated slops after a day's trade, although this was more commonly known as your true toper as a bottle of All Sorts.

The next time you go into your local, be sure to test your man behind the bar.

If he is lacking, it might be no harm to instruct him in the history of the trade, for knowledge, they say, like a drop drink, does improve the outlook.