Out in the Open: Gurrier supporters run amok in Kerry 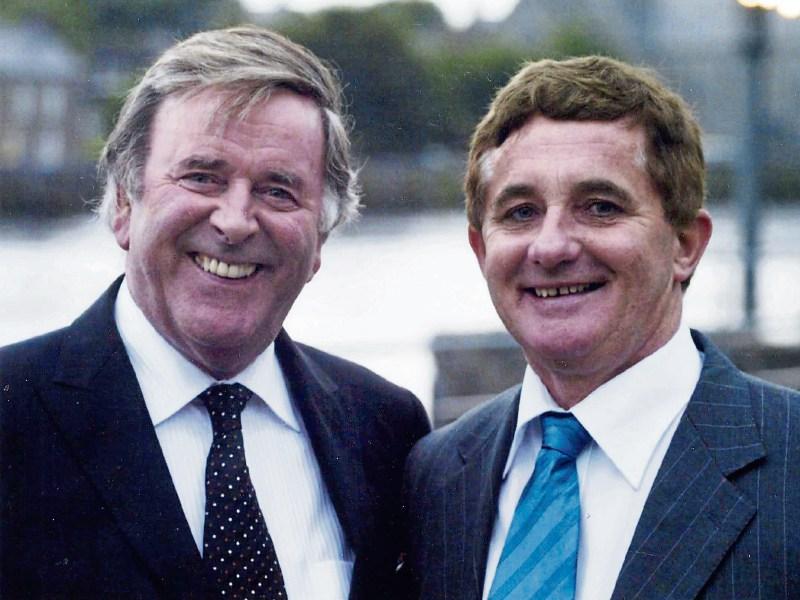 PICTURE THIS: Austin Gibbons former proprietor of Kranks Korner and the Woodfield House Hotel pictured with the late Terry Wogan at the freedom of the city ceremony in 2007

WHAT a terrible pity it is that great occasions can be ruined by the heedless actions of a few, and how is it that often one man can spoil an occasion of happiness for so many others.

It happens, I venture to say, because we tend to close our eyes and our mouths and allow situations to deteriorate in the foolish belief that the trouble will blow away.

I am not referring to the recent presidential debacle, which, in my humble estimation, was nothing more than an unfortunate head-on collision between unbridled impetuosity on the one hand and pathological petulance on the other.

I refer to the National Football League encounter between Dublin and Kerry which was recently contested in Tralee.

The day before from noon onwards, carloads of supporters converged on the capital of Kerry, and everywhere there was a feeling of excitement and an air of holiday-making.

As the day wore on, the town of Listowel benefited more than somewhat from the passing trade, and for this, the town was grateful.

However, as night impressed itself upon the scene, the quality of the passing sportsmen began to deteriorate, and a number of pubs closed the doors.

They had no choice in the matter, although for so doing during a night of Listowel races, an ignoramus I encountered in Giln told me what I could do with my pub.

He forgets I must run my pub my way, just as he must do his job his way.

He was not a native of Glin.

I shall say nothing about the game itself, except that both teams gave of their best in all in an effort to maintain the good name of the GAA.

This, they succeeded in doing in one of the most sporting encounters one could wish to see.

The teams parted on friendly terms, shook hands all round, and each of the thirty or more sportsmen involved went their separate ways peacefully and in so doing, brought luster to the sport in question and immeasurable credit to themselves.

One would fervently wish that the matter ended here.

Alas, and alack, it was then that the troubles really began.

There were some indications of what was to follow in Tralee the night before the game.

A total of forty-five arrests were made by the Garda, who, to their credit, had the town in control from start to finish.

They could not, of course, be everywhere.

In one of Kerry's most important and well-run hotels, staff were abused, telephones broken, and mattresses set alight in needless displays of blackguardism

Yet on the following day, when the match was in progress, there wasn't a whimper out of the morons who caused the damage the night before.

There was an incident where a member of a Dublin colour party of about ten snatched a green and gold cap from the head of a six-year-old boy and appropriated the paper headgear for his own use.

He reckoned without the boy's father, who ventured without fear into the middle of the party and retrieved the cap.

At first, the purloiner was unwilling to hand it over.

He relinquished it quickly; however, when he was smartly cracked on the extremity of the jaw by a large hand, which often fielded a high and difficult ball for Kerry in the late fifties.

There wasn't a word out of this particular bunch for the remainder of the game.

It was the same all over the famous Tralee pitch.

One felt sorry for that majority of Dublin folk who are always welcome to Kerry, and who have always brought colour and dignity to football matches in which Dublin have been involved.

The gurriers waited until the match was over, and then in the full knowledge that there was safety in numbers, they caused severe damage to property all over the town.

It is estimated that at least two hundred cars were deprived of their serials and windscreen screen wipers, not to mention other damage.

Their achievements on the train are now past history, although I know from long experience that travel to and from matches by CIE can be a most frustrating experience.

Often there is neither food nor drink.

Toilets are inadequate as they were on the night of the match, and there was no security of any consequence.

In short, there was a licence to act as they did for the hundred or so misguided and mentally deficient wretches who wrought such havoc on the trains.

In Listowel, after the match, there was also considerable trouble, although three metropolitans misfits will be sorry they interfered with a certain car at the back of William Street.

Unfortunately for them, they were caught in the act by four countrymen who decided it wasn't worth troubling the guards over such a trifling matter.

An exchange of fisticuffs followed, and when it was all over, the young gentlemen from the metropolis were sitting or lying on the ground.

In another part of town, they refused to quit a premises at closing time, and the Gardai had to be sent for.

In another premises, they started a row, and again, the Gardai had to intervene.

In a third premises, a party of a dozen or so real Dubliners behaved themselves like gentlemen following a lengthy sing-song and left on the dot of time when said time was called.

In a fourth premises, they were unceremoniously kicked out when they refuse to leave.

Here they were heavily outnumbered.

There has been little of all these happenings in the papers.

Instead, the Tarbert and Ballylngford teams were taken to task for the manner in which they contested the Kerry Intermediate County Championship.

Admittedly, Tarbert must shoulder the bulk of the blame.

If they fought itself, it was on the football field, and there were no supporters involved.

They left the fight behind them on the field of battle, and promptly it when the game was over, and that is as it should be.

They damaged no aerials on the way home, nor did they invade pubs and try to intimidate owners and customers.

They'll be back again when they'll atone with fine football, as they always have, for past transgressions.

What is the answer to the type of hooliganism which manifested itself so vividly and so horribly as a result of a National League tie?

The answer is eternal vigilance.

Publicans, GAA and CIE alike must face up to the fact that mod rule is inevitable when large elements of such supports move out from the cities.

I accuse the GAA and CIE of being naive about these crucial matters.

The same naivety was expressed before this, but what of vigilance, what of nipping the trouble in the bud?

Alas, there are none so blind as those who will not see.

Before the Dublin versus Kerry game, there were thousands in Dublin and Kerry who could tell you that trouble was inevitable on the trains on the way back.

There were countless precedents to prove them right, yet there was no additional security.

The same thing applies to pubs.

It is never easy, but 99 times out of a 100, trouble can be spotted before it is allowed to be spread.

An early and firm line is the surest guarantee of peace and quiet.

A patent inability or unwillingness to estimate trouble from big sporting occasions has been a weakness both of the GAA and the CIE in the past.

I am not being wise after the fact.

I could call up a hundred witnesses to prove that I predicted trouble (and severe trouble at that) on the trains back to Dublin, but I expect no pat on the back for this.

Almost everyone who knows anything about the prevailing situations in sport made precisely the same forecast.

A party of friends from Dublin who called to see me on their way home from Tralee on Sunday evening told me that they would not travel on the Tralee to Dublin train for love or money, and under no circumstances would they permit one of their children to travel on the train.

Do these people know more than the CIE authorities, or did CIE really believe that there would be no trouble?

What is boils down to is this:

It would seem that the man in the street knows when there will be trouble on trains, but CIE does not.

The people I am really sorry for are the vast majority of Dublin supporters who are often embarrassed by the behaviour of a relative handful.

It is surely not beyond the power of a mighty organisation like the GAA to isolate this rotten few.

Maybe I am being hard on the GAA.

If it seems that way, it is not my intention, but every genuine follower in the country would raise hats respectfully if this cancer in the side of the national games could be eliminated before it gets a firmer hold.

A stitch in time saves nine.

This article first appeared in The Leader on December 4, 1976.