Out in the Open: Victimised: the people who dread indoor loos 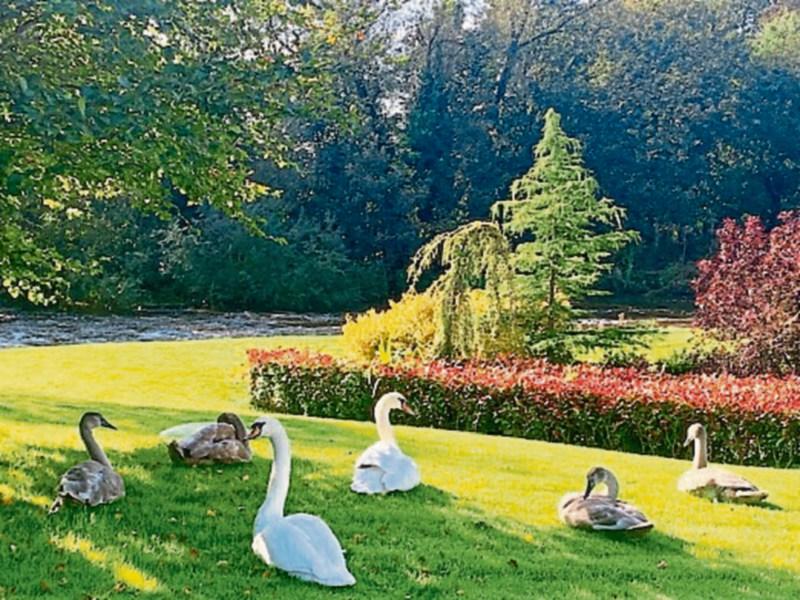 PICTURE THIS: Deirdre Fanning caught a wonderful view of a family of six swans resting and preening themselves in her garden in Croom

sEVERAL weeks ago, there appeared in these columns a length treatise concerning life in the great outdoors.

We dealt at length with the problems of those who cannot avail themselves of indoor toilets.

We also had a look at the pitfalls involved when man chooses to renege the orthodox indoor toilet, which is the sine qua non of every modern household.

The unfortunate people in question, through no fault of their own, have often been regarded by religious and civil authorities in a very poor light indeed.

They have been pointed out as people to be avoided and even shunned, and never was there a case made on their behalf by so-called lovers of liberty who go so often to such pains in order to champion less worthy causes.

The majority suffer from claustrophobia, and the thought of being imprisoned in the narrow confines of tiny bathroom and even smaller WCs is enough to drive them to their wits' end.

Consequently, they are driven to take chance they would not otherwise dream of taking.

Then there are those adventurous spirits, sportsmen of a kind, who look upon indoors toilets as the domains of weaklings; who, like the Fianna of old, spurned the confines of domestic retreats and communion privies and shed themselves guilelessly and guiltlessly in the open air under the heavens, who were at one with nature and who subscribed to the idea that what was taken from the earth be returned it by any means whatever.

Let us look, however, at those unfortunates who are at present being victimised by the civil authorities.

Let us, as is our practice always in cases of a tricky nature, take a typical example.

To town in order to take up residence for the first time comes a retired countryman.

He may be a farmer who has disposed of his holding, or he may be a widowed old fellow who comes to live in town with the daughter.

He may be an aged or destitute individual who has come to take advantage of the comforts of an old folks' home, or he may be no more than a simple country fellow who has unexpectedly inherited a house in town.

In short, dearly beloved brethren, he could be you or I, or he could be an old and likeable fellow whose memory tends to leave him down and as a result, he cannot be always held fully accountable for his apparent follies.

The world has its fair quota of such people, and just as surely as it takes a goat to provide us with goat's milk, it takes all kinds to make a world.

We should remember this when we encounter unfortunates who tend to make use of lane and byway for the simple purpose of relieving themselves.

We should not express alarm nor invoke the aid of the law to terminate what I shall call external sittings.

We should, if ye have been properly brought up, as I believe as we have been, avert our eyes and pass discreetly by so that these innocent victims of unpredictable stomachs and bladders might be allowed to continue their innocent exercises in peace.

There is nothing so shattering, as many sensitive readers will testify, as being suddenly challenged while involved in such an uncompromising situation.

The indoor toilet has always been rightly regarded as a sacred place, and when we behold upon entering hotel washrooms, the sign "engaged" marked upon the doors of toilets, we withdraw and await our turn.

The word engaged is hardly fitting or adequate to describe the activities which may be taking place behind closed doors, but it does guarantee that these activities will be allowed to continue without interruption.

I wonder if people fully realise the shattering effect of untoward disturbances on the composure and equilibrium of the person behind the closed door of a toilet.

Try to put yourself in his position.

There he is seated in the most embarrassing of all positions when suddenly somebody smithes with great force upon the door.

Remember that the victim of this barrage cannot see what is happening outside.

Imagine then, the terror and woeful surmising, especially if the enclosed party is imaginative and sensitive.

Any external noises, no matter how trivial, tend to alert the incumbent to the threat of danger, and whether we like it or not, being caught with one's trousers down is still regarded as the greatest of all personal indignities.

The louder the external noise, the greater the trepidation within.

Men and women, particularly those of an excitable nature, have been known to faint when heedless blackguards have recklessly kicked or smote upon the doors of their temporary sanctuaries.

Robert Leslie Boland, the great North Kerry balladeer, once referred to the indoor toilet as the throne room of soliloquy.

He was right, and to interrupt a soliloquy is the essence of bad manners.

Who, there, will blame the man who will not commit himself to the indoor toilet?

Let us now suppose that he is a natural sort of man, that is to say, a rustic, who has survived successfully for years without the aid of bathroom or WC, who has, instead, availed himself of the wilds to perform those natural functions so necessary to inner cleanliness.

Not being the owners of a modern home whose amenities are taken for granted, he looks to the countryside around him for the absorption of his body wastes.

There are shady bowers and sheltered corners in abundance, and all admirably suited to the functions in question here, far from the maddening crowd, in sylvan splendour, with which no man-made contrivance could possibly compete, he left all his troubles behind him so to speak.

Alas, the towns and cities of this country offer no such privacy, but custom dies hard, and when our friend is caught short, he must avail himself of the nearest natural retreat.

Alas, this is often a garden in a suburban area or a commonage in much use by passers-by.

There is no real privacy to be found in built-up areas, but you try telling that to a man who can restrain himself no longer.

All his life, has been used to jumping over ditches and hedges, or concealing himself behind convenient bushes, and even when these were not available, his privacy was assured for the good reason that humans were few and far between in out-of-the-way country places.

Such manifestations of outdoor relief will not be tolerated by the authorities, and our friend often finds himself charged with offences such as indirect exposure and posterior nudity to mention but a few of the many offences with which he can be charged.

In the bewildered mind of the erring rustic, there is no conception of wrongdoing.

For instance, if pressed by an abundance of water in a country road, the simple and traditional remedy was to turn one's back to the approaching traffic until the needful was accomplished.

In the town, this is just not good enough for people have a habit of approaching from several directions at the same time.

Consequently, when our friend turns away from one pedestrian, he finds himself facing another.

Townspeople who may have originally come from a countryside where such outdoors practices were condoned have become alienated and prejudiced by indoor life and by the availability of bathrooms or water closets.

A sight which once more might have provoked no more than a sly smile now, causes outrage, and fears are expressed for the safety of innocent children as well as women.

In the countryside, nobody takes any notice of an old piddling at the side of the roadway.

Country people are more aware of the vagaries of an inconsistent bladder, and there are mainly women who were often obliged to hold their possessions for long periods in the absence of suitable shade.

They knew what it was to be stuck to speak, and their sympathies are wholeheartedly on the side of the man who is unable to retain his impurities.

At this juncture, the gentle reader will be sure to ask why the victim did not avail himself of a public toilet. Easier said than done.

There are many country people who would not entrust themselves to the interior of a public toilet for love or money.

One might be locked in and allowed to languish for days, even forever.

A public toilet is like a prison in some respects.

It is also impersonal, and who knows what might befall an innocent countryman were he to risk a visit there.

No better to risk prosecution by availing oneself of a byeway, an archway, or the side of a convenient and empty motor car.

This way, a man is dependant on nobody but himself and may retain the link with the great outdoors where his heart really belongs.

This article first appeared in The Leader on November 27, 1976.