Out In The Open: My guide to the long-haired featherless birds of Ireland 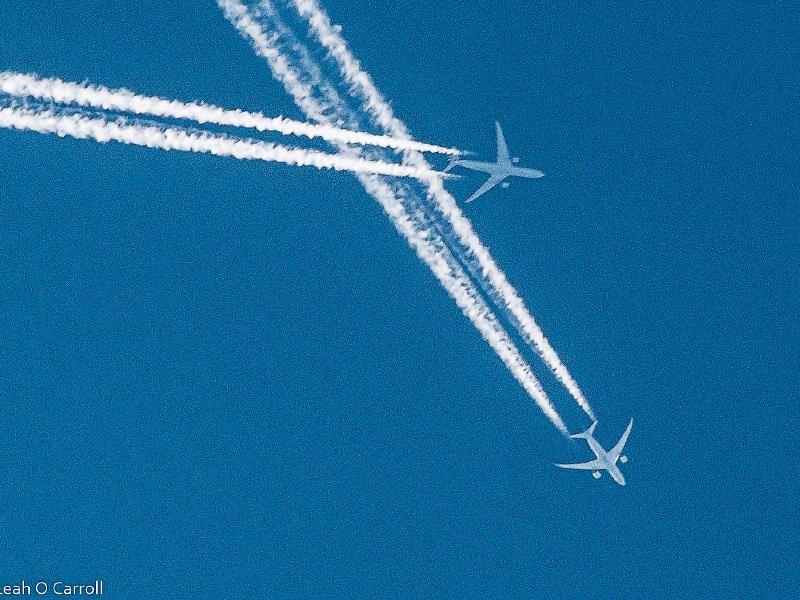 It is busy up there: Two planes crossing paths over Patrickswell, 1,975ft apart, nothing dangerous about this happens every day. Photo by Leah O'Carroll

THE resemblance people bear to animals in their movements, appearances is frightening to say the least.

Most of us act like asses and mules from time to time but this is not what I mean. Let me give an example.

Once at a wedding I took careful stock of a man with bulging eyes and a small mouth. At the time he was consuming a bowl of mixed vegetable soup. He reminded me of a fish. His head, except for the ears, resembled a cod’s head in all respects. He was as bald as a coot in a boot.

I remarked the likeness to a man who sat by my side.

“Little divides us” said he, “make no mistake about that. Will you look to the left of you and tell me is it a duck or a dame you see?”

I looked to the left and could see approaching us a stout waitress bearing in her hands a large dish of mashed potatoes. Her legs plopped on either side of her in the very same fashion as a duck's when the creature is addled or excited or scurrying to water.

Her ponderous posterior swayed from side to side and at times it looked as if she must keel over. however , when this seemed most likely the buttock nearest the ground was brought back in to even keel by the upraised buttock. All the time when the collapse seemed inevitable one buttock acted as ballast for the other.

She used the dish of mashed potatoes the way a slack wire walker uses his balancing pole. Beyond doubt, the woman resembled a large duck and I am convinced that close examination will reveal that each and every one of us resembles some animal or other in some way to some degree. Some of us look like cats, while more look like rats and bats. Some look like greyhounds, while more look like Alsatians.

I once had a teacher who looked like a goat. He had a sensitive and infinitesimal nose and his chin was meticulously decorated by a neat goatee. His hair stood on his head at either side leaving a hairless patch in the centre.

His eyes were full of query and perplexity, exactly like a goats. h e was as near to an ageing puck as makes no difference.

I had another teacher who looked like a heron. He had a long neck which was forever gyrating and twisting jerkily. He was once sitting peacefully by a ricer when a mischievous fowler fired a shot at him thinking he was a member of the grallatorial species.

I, myself, also bear a slight resemblance to a heron and a somewhat more pronounced one to a greyhound. I also have a habit of barking back at dogs that bark at me,

I find this disconcerting and I am reminded of the statement made by the man who sat beside me at the wedding; “little divides us”.

Wasn’t Robbie Burns your wise oul’ coot when he wrote:

“Oh would some power the Giftie gie us

To see ourselves as others see us.”

Burns himself must have paid a little attention to the physiognomy for if we are to accept his best known portrait the man is a dead ringer for a bitch whippet, no disrespect intended.

Doesn’t Daniel O’Connell always remind me of a dog and our absent friend Paul Singer of an outsize Boxer?

But what species of creature is it which man most resembles? It us, of course, the feathered species.

Women in particular are nearer to birds than they are to anything else, and browsing in a bookshop recently I was greatly impressed by the number of hardbacks and paper-backs devoted to the subject of ornithology which, for the benefit of non-etymological perusers is that science which treats with the form structure, classification and habits of birds.

Now, who says I don’t give value for money!

I was struck by the many fine illustrations, the many useful hints on bird-watching and the many thoughtful observations on the great mystery of bird migration and I reflected on what a great pity it was that no scholarly works were available on that most complex of all God’s creatures. i.e., the long-haired loquacious, featherless, ring-fingered female of the human species.

Do not for a moment suppose, dear reader, that we are here to be derogatory. No indeed, because my sole purpose in decrying a situation where no such valuable and scholarly works are available is to bring about a better understanding of a deeper knowledge of those who belong to what is jocosely referred to as the weaker sex.

Ever since man gave up being a monkey there has been misunderstanding, mistrust and suspicion of femininity and it could well be that the reason for this is a lack of suitable text-books on the subject.

There was a time when Bible-best drummers and indeed not a few travelling salesmen and others nearer home used to keep title black books wherein were to be found many useful pointers as to form of the entrants.

I feel, however, that the motives here were ulterior and ungentlemanly and not at all the type of information required for our present purpose.

While it is a fact that no two females are alike it must nevertheless be conceded that all are possessed of many similar idiosyncrasies and characteristics and take quite an exceptional amount of understanding at certain times.

Imagine how it would help the all-too-frequently benighted male of the species and if there was a book or two available where he might hie for assistance when his mate was approving intractable or indulging in tantrums for which he could find no reasonable explanation.

In the booksop I came across many excellent titles.

There was for instance: The European ORnithological Survey”., whose jacket proclaimed it to be the most comprehensive todate, and there was a “Guide to Irish Birds”.

There was a small paper back with the title: “Strange birds o fBritain and Europe”.

Surely, I thought the countryside cries out for similar books on the female species.

I noticed entering through the narrow doorway a well-built, red-faced woman with a heavy message bag in her hand and hat firmly rammed on her head.

She moved with her head down and she moved in a straight line, bumping as much as a tweet of apology. She would, of course, be none other than that all-too-rare specimen, the common, Red-Legged, Bull-Healed Tearaway.

The call is snortlike. Mostly to be found in crowds burrowing her way through all obstacles. Trots in open spaces and uses handbag as ballast. A bird of passage. Dominates the male who does most of the hatching.

There were other birds in the shop. There was a fine specimen of that high-voiced species known as the Ganneteyed Big-Breasted Wader. This type is fond of standing still for long periods while she surveys with mounting disapproval everything that catches her eye. Her bill is generally hooked at the tip and her call is sharp an scornful.

I noticed standing quietly at the farthest end of the shop a fairly common specimen who kept her eyes unwaveringly on me for long periods, whenever I picked up a book she fastened her gaze upon me.

Her attention was easily diverted. However, for each time the till rang she would concentrate fully on whoever was making the purchase. She was, of course, the Greater, Open-mouthed, Wide-eyed Starer.

This specimen is to all intents and purposes mute and is to be found mostly in churches staying open-mouthed at hymn-singers and transient communicants alternatively.

There are, of course, countless other specimens in dire need of cataloguing and classification. I have, I hope rendered some small service to would-be bird-watchers in this sort theatrise and in future when we see outlandish members from the ornithological world let us repeat the wisest of all wise pronouncements:

The article was first published in the Leader on May 8, 1976.