John B Keane: Men of Moyvane claim St Patrick’s dad as their own 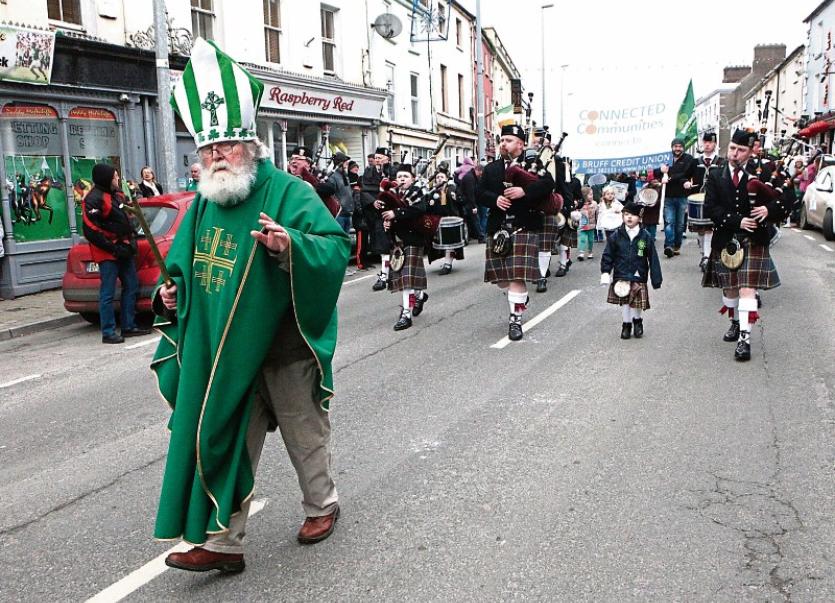 I sojourned to the pleasant countryside of Moyvanebwee or Moyvane, which it is now called last Sunday after the football game between Listowel and Ballylongford.

Close by the village, the Gale flows cheerily. To the West is Cnocanore Hill and nearby is the village of Knockanure.

The pub was crowded after the game and my old friend, Franco Kelly, assured me that he had not sold his famous hostelry for £63,000 as was rumoured all over North Kerry last week.

Here too I met a man who claimed that Saint Patrick’s father was born in the parish of Moyvane.

The claimant was none other than Batty Stacpoole. I had heard before of the same Batty and knew that he was in the habit of frequenting the famous Moyvane premises where we were all gathered.

Batty hails from Aughrim, which is in the parish.

“Did you know,” he said to me, “that Saint Patrick’s father came from this part of the world?”

I confessed that I did not know. “Well,” said Batty, “he was born in a place called Poulacro, in Aughrim, but he left as a young boy to go working with a farmer and was never seen around here again.”

The story was verified by several Moyvane men who happened to be listening.

“How is it,” I asked, “that I never read about it anywhere, or heard about it up to this? How come it was never taught in the schools as part of our history lessons?”

“The son never came to Kerry,” said a Ballylongford man who was in our company.

“Strange,” said another, “that he wouldn’t look up his father’s people.”

The argument continued and a man from Listowel told us that the reason Saint Patrick never came to Kerry was that his ass was stolen in Kanturk after he had tethered the animal outside an eating house there.

“He was on his way at the time to Tralee where a big crowd was awaiting him, including a large contingent from Aughrim, particularly Poulacro.”

“I don’t know all about this,” said another Listowel man skeptically.

“If you don’t believe it,” said Dan Lou Sweeney, “you can ask Ruckard Drury of Knockanure.

This finished the argument.

“Dear Mr. Keane, I agree with you up to a point about anonymous letters but what is an obscure person like me to do when I want to make myself heard? If I sign my name, I may well draw all sorts of troubles on top of my head.

“The future of my job could be at stake. I could make enemies who might never forgive me and who may seek to do me harm. Constant Reader.”

My advice is to go to your doctor at once. He may be able to help you.

PADDY DRURY woke one morning on the Listowel Mail Road with a terrible sick head. It was the Friday after Listowel Races.

He looked around him to find that he was lying against one of the two pillars which stood at either side of the entrance to the residence of Mr. Hill, who was the agent for Lord Listowel. After a while, Mr. Hill appeared and told Drury to be off about his business.

“Be off, you drunkard,” Hill shouted at him. Paddy thought for a second or two and then came up with the following:

“There’s only one letter between Hell and Hill but the world would be better off if Hill was in Hell.”

To give Hill his due, he relented and gave Drury the price of a drink.

SPEAKING about race meetings, I wonder how many Tarbert and Glin folk will have heard of Ballyculehane Races, which were first run in Ballyculehane on Tuesday, March 19, 1872.

The Tralee Chronicle and Killarney Echo of the period gives a lively account of the proceedings.

The writer first looks at the fashion, and has kind words to say about the landed elements who were present. He is even kinder to the peasantry, as he calls them.

“We pondered briefly, in admiration, of the manly forms, noble bearing and vigorous knit of frame exhibited by the male portion of our peasantry and the graceful and agile forms of their other slender but not less sprightly sex.”

The big race of the day was the Ballyculehane Steeplechase, with a stake of thirty pounds. This would be worth five hundred pounds today.

The race was son by Sam Bourke’s Red Robin and the jockey was a man called Lynch.

I wonder if he would be any relation to another jockey, whose name was also Lynch and who was hanged in Australia around 1880. The latter emigrated from Kerry around 1875.

I would be most interested to find out when the Ballyculehane Races were allowed to lapse. At the time of the inaugural meeting, the famous Listowel meeting was thirteen years old, but had no stake in the region of thirty pounds.

The reporter for the Tralee Chronicle and Killarney Echo was a skilled writer. After a short description of the fourth and last race, he has this to say:

“This closed the day’s sport which was thoroughly enjoyed by all present. The course was selected with the keen judgement of sportsmen, the ground covered by its being perfectly level, and of a lively nature. The spectators were thus perfectly at ease on an elevated portion of ground, while enjoying one of the most delightful panoramas nature could afford. Well may Glin and Tarbert be proud of the inauguration of these sports and we may hope for many renewals of them.”

The late, great John B Keane was a Leader columnist for more than 30 years. This column first appeared in our edition of December 15 1973

I WOULD suggest to anybody with money to spare not to forget the Limerick Simon Community Building Fund. You might send your subs to: ℅ Limerick Social Services Centre. The Simon Community is a haven for those who have nowhere else to turn. Your friend and mine, the legendary Brother Steve helps out there. His vast experience is needed.

What a chequered career he himself has had - from a recruit in the Irish Volunteers to a clown with Duffy’s Circus.

It is a career, however, of which many might be proud and, when the roll of honour is finally called, Brother Stephen Russell will receive most honourable mention.

This week he submits a poem for Christmas. Steve, I’d love to put it all in but it’s too long.

My dear John B., an earnest plea,

From an old and faithful friend,

Through the medium of your column,

May I, this message send?

To all our mutual readers,

Wherever they may be,

I wish them every blessing

May the harmony of angels,

The Arab and the Jew.

May our own beloved homeland,

From fear and strife be free,

May the Holy Child make us meek and mild

Thank you, Steve. Your good wishes are appreciated. I wish you success and peace and the same to your charges and to your friends. That the flowers might smile for you.