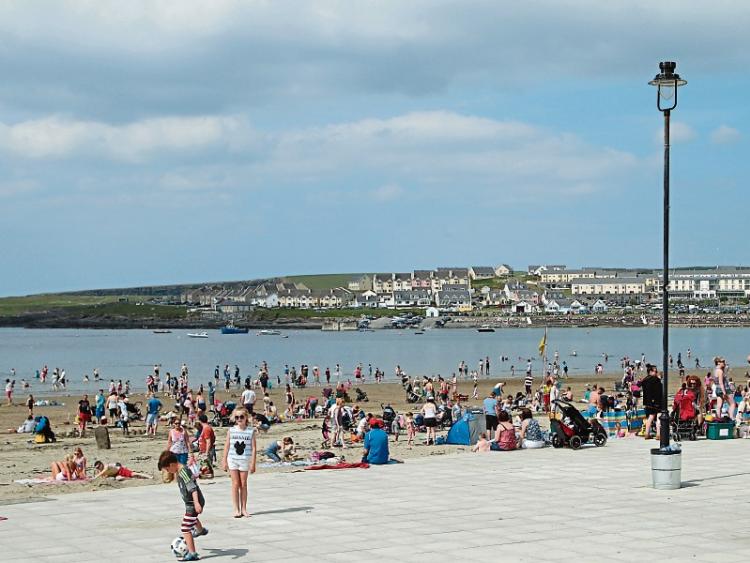 Climate can not improve upon a natural set of circumstances so a man could have as successful a honeymoon in Kilkee, pictured, or Ballybunion as he can in Morocco or the Canary Islands, says Faulkner

“THE BEST man that ever was, lived and died and wore one suit at the time.”

The foregoing remark was made by Jack Faulkner when he heard that a honeymoon couple of his acquaintance were spending the first fortnight of their married lives in Spain.

When pressed for an explanation, Faulkner revealed that in her own inimitable way climate could not improve upon a natural set of circumstances and that a man could have as successful a honeymoon in Kilkee or Ballybunion as he could in Morocco or the Canary Islands.

“When I got married,” he continued, “we spent the honeymoon in the townland of Purt, which is near Abbeyfeale. There was hail that night the size of duck eggs and an east wind that could peel a sack of Banners but, if today was yesterday, ‘tis the same course I’d take.”

Jack then went on to tell me of a friend who spent his honeymoon in a caravan near Tournafulla. The wife was shy so she turned her back to the husband. He lighted a candle to see what time it was and, in doing so, beheld that she was clad in a most unusual nightdress.

On the back, which was turned to him, was written, “Sunrise Flour 120 lbs.” When she turned over in the bed he observed that the same legend was written on the front.

As things turned out, they lived happily ever after and they wound up with fourteen children.

A NOTE before me says, “Do not forget Glin Coursing, 13th and 14th of October”.

I think this is the first year of Sunday coursing in Glin, which is rightly regarded as one of Ireland’s best meetings. The place has a carnival atmosphere rarely found at coursing meetings and there is as much entertainment on the field as off it.

There are sideshows and stall displays all over the place and my old friend, Whacker Daly, of Limerick, hasn’t missed a meeting in 30 years, since he was a gorsoon in the army and stationed in Listowel.

The Whacker now operates a stall at meetings all over Munster and if it’s value for money you want you needn’t go a step further.

In the long green sward, overshadowed by the ancient house, is the course itself, and here the running of the celebrated Desmond Cup takes place.

It is always a hectic meeting with the crowd seven and eight deep along the sideline. There is the tense moment before the ultimate slip, the withholding of breath, then a mighty cry as the buckle moves upfield after the hare.

There is the frantic high-pitched whimpering of onlooking, blood-crazed hounds. Suddenly, it’s all over and the red-coated judge waves a red flag or white.

One thing the note before me does not indicate is whether or not there is an extension in the pubs on the final Sunday night. An important factor this, for reasons which I shall not dwell on now.

A LETTER from Blessington Street in Dublin from a lady who wants to enter the matrimonial stakes. I give it here exactly as I received it and I have the full name and address available for interested parties.

“Just a line to you hoping you are well. I am writen this note to you if you could know of a nice man that wants to settle down. I wood like to get a nice man myself as I don’t go dancing so if you anny one let me know please and thank you good by rite soon.”

AN ASKEATON friend sends me a long poem written by her protege, Willie Robinson. The title of the poem is Sweet Askeaton Groves. She want to know if the poem has merit and, if so, what should Willie Robinson do with it.

As this column caters for a wide range of readers whose interest cover many fields, I have no doubt that adequate comment on Willie’s efforts will be forthcoming.

Anyway, here goes with the poem:

I’ve seen the strands in many lands, the rich land and the poor,

Far away in Australia and the boys from Knockanure,

Yet all the strands I have seen wherever I may rove,

There’s none compare I do declare with sweet Askeaton Grove.

And the friendly faces of my friends beside Askeaton Grove.

For wrenboys and for Gaelic games you may sing your heart’s content,

Of all those plains where falls the rains you may say whatever you will,

Askeaton Grove ‘tis you I love,

Your spirit haunts me still.

Those are but three of the seven stanzas in Willie Robinson’s poem. Personally speaking, I would be inclined to think that the poem is unlike any other of its kind but beyond that I would not care to go.

On Wednesday night of last week, I received a call from a Mr. Petersen, of Danish Television.

The call was from London and Mr. Petersen asked me if I would be willing to do an interview for his unit. I agreed and then he asked me if I knew Sonny Canavan who has the herd of goats and the talking dog.

“In the name of God, man,” said I, “don’t I see him every day of the week and the days I don’t see him can’t he be seen by anyone that wants to at his home in Dirah West.”

The upshot of the exchange was that I promised to have Canavan ready for Danish Television at four o’clock on the afternoon of Friday, September 14.

Did we ever think and we listening to Canavan’s dog, Banana the Fourth, lisping his first puppyish words that a day would come when we would be sought after by Danish Television?

Sonny Canavan has already appeared on Telefís Éireann seven times, on BBC three times and on French television once. He has been recorded by sound radio for stations in Canada, America, England, Australia, New Zealand and Sweden, to mention but a few.

I dare to lay odds that no other man with one eye, Moshe Dayan apart, has made so many appearances on television and radio.

Referring to Canavan’s one eye, it was myself who had had the honour of installing Sonny’s first glass eye. I was, at the time, working at Keane-Stack’s chemist’s shop in Lower William Street when an eye, which had been ordered by Canavan, arrived by the afternoon post. Nobody would insert the eye, hazel-nut brown in colour, into the socket and after some persuasion, I had a go. I succeeded at once and ever since I have been Canavan’s official plastic-eye installer.

The late, great John B Keane was a Leader columnist for more than 30 years. This column first appeared in our edition of September 15 1973