No finer time to be in Ballybunion than September 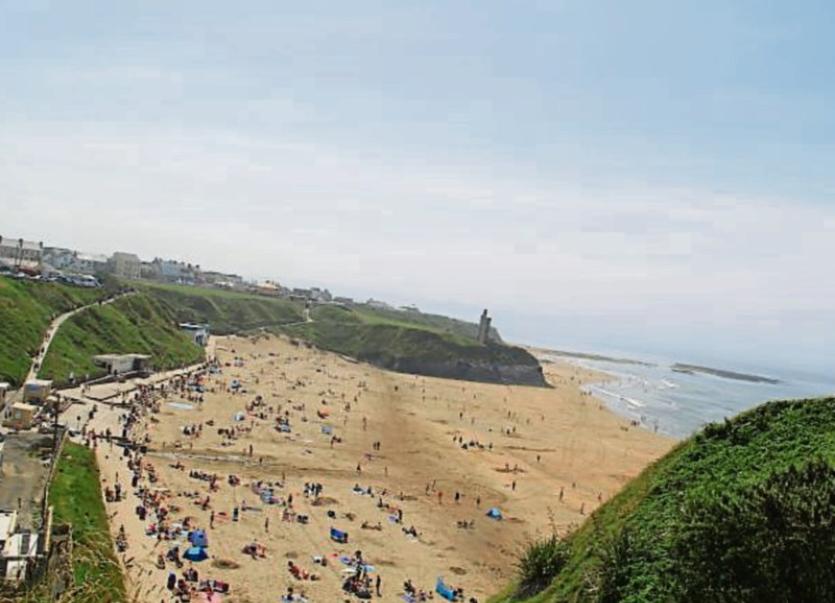 OVER THE years my favourite period in Ballybunion has been the crisp and clear month of September. Let others argue the case for July and August and let lovers of June contradict me flatly but I am unchanged in my view that September is the best time.

Invariably the weather is fine. The nights are cool and sleep comes easily. The sea has a sharper note and the air smells better.

There was a time, which I remember well, when none but elderly farmers and their wives availed themselves of Ballybunion during September. They would sit out of doors by day admiring the sea and anything else which caught their fancy.

Mostly they came from county Limerick, east and west, and from North Cork. They would mostly be farming folk who had “handed over” and had earned the right to spend a holiday where they chose.

Mostly they stayed in guesthouses and I knew some who would bring their own bacon and potatoes with them, not to mentioned cakes of bread and gallons of homemade butter.

At night they might taste a half one or two or maybe a few bottles of stout but that was as far as they went. For the most part they sat on verandas and played 25 or talked about the fecklessness and heedlessness of the day’s youth.

I remember well to be taking a pint of stout with a friend one Monday evening some 25 years ago at a well-known alehouse in the centre of the village when an oldish man wearing a hat entered, followed by his good lady. They were obviously country folk.

Our hostess seemed to be in no hurry about serving them.

“Good day to ye,” she said civilly enough. Aside, she addressed my friend and I.

“Let them roost there awhile,” she said, “they’re only them oul’ September models.”

Your September model was, of course, a fairly careful sort of retired farmer. Honest to a fault, his holidays were as frugal as his workdays.

He dressed in the traditional navy blue, with waistcoat and good quality boots.

He always wore a felt hat and you’d never catch him with a fag in his mouth. The pipe was his limit. He’d smoke a fag alright if he was offered one.

You might also gather that he was utterly dependable. This is to say he would never start a row or leave a speck on his plate barring the traditional morsel that bespoke good breeding. We shall not look upon his likes again.

He was a good judge of healthy weather and that was why he chose September. There may have been contributory reasons, such as numerous vacancies, but it was the time of the year mostly.

The youths too were gone back to school and there was peace and quiet save for the rousing sing-song here and there and the annual eruption of Listowel Races.

Speaking of youth, I remember once to be involved in the closing stages of a Question Time at Saint Michael's in Listowel when an answer, which should not be allowed to go unrecorded, was given to a tricky question.

The boy who was asked the question waited a moment or two, his ears pricked for a prompt. None was forthcoming. Then without batting an eyelid he had a go.

After September, as everybody knows, Ballybunion takes a rest, which last till the seas are lashed by the thunderous gales of March.

The ladders and buckets of paint appear here, there and everywhere, and there is a furious search for tradesmen.

Gone for another 12 months are the snore-inducing winds of winter as the proud old village girds itself for another assault.

Assemble all of its faults and virtues, its passions, caprices and whimsicalities and still you will not find its equal, for better or worse, in sickness and in health till death do us part.

THE FUND for the erection of a headstone for the late Paddy Drury will close on the last day of this month, i.e., the thirtieth of September.

Since my last appeal in these columns two weeks ago, the fund has swollen considerably and all that is now needed is a few more pounds. As it is, there is enough to erect a modest commemoration stone but I think we can do a little better.

I have at present in my possession the sum of thirty-six pounds and thirty pence, and as soon as the fund closes in a few weeks time, we will proceed with the business of choosing a stone and devising a worthy inscription.

The most recent contributors all come from an area where Drury was well known and where he worked with local farmers, with whom he was always on good terms.

Only rarely did Drury cauterise the farming community. As he once explained in a pub in Abbeyfeale, the farmers of the time were no better off than himself and if they got reputations for being tight-fisted it was because they had nothing to give.

This was only too true of most farmers until the second world war, when produce and stock prices took an upward turn and continued to do so ’til’ this present time when farmers are in receipt of decent incomes.

HAVING CONCLUDED the most successful Fleadh in the history of the event, the town of Listowel is now taking a short breather in preparation for the annual race meeting.

Another record for prize money will be set this year, the hundred and fifteenth occasion in an unbroken gallop, from obscure beginnings in nearby Ballyeagh to the present colourful and luxurious location at The Island in Listowel.

This year, too, the NBC Television Company of America is making an hour-long film on the races and on cultural aspects of the locality.

This is one of a series of eight such films being made in Ireland to woo back the lost American tourist.

The film will stress the cultural, recreational and scenic sides of the country in an effort to dispel the current impression abroad of a violent and dangerous climate.

A feature of the Listowel film will be the appearance of the Askeaton Wrenboys, the reigning All-Ireland champions. They have been invited to the film location in Listowel on September 27 where they will give a full recital, similar to that which won them the All-Ireland crown last September.

A MOST interesting letter this week from a cross-channel correspondent who would seem to be attached in some significant way to the world of medicine. Here goes:

“Dear Mr. Keane, Thank you for your writings and all the fun and laughter you have provided. I have spent 25 years here in England and I have seen the gradual breakdown of values and decencies.

“I’m sure you are quite in control of the amount of vulgarity you decide to allow and I hope you will not allow it to go too far.

There is distressing evidence all round us of where it leads. Perhaps in a large practice one sees the end results. Please can I ask you not to add to the downward drift. This is something my Irish friends dread as much as I do. Again, thank you for your gift and I hope you don’t mind if I don’t sign my name.”

I do mind very much as nothing has contributed more to the downward drift, as you call it, than the non-signing of names.

The late, great John B Keane was a Leader columnist for more than 30 years. This column first appeared in our edition of September 8 1973